What BEER are you drinking? (Part 1)

Rothaus Märzen Export
Except I just finished my last bottle.

Just picked up a couple of bottle of a Stone collaboration with some Hawaii brewery - Coconut, Macadamia, Kona coffee porter. I’m sure it will be a nice dessert beer.

I didn’t bite on the Lips of Faith because it’s PRICEY! I’d be interested in hearing what people think of them.

I didn’t bite on the Lips of Faith because it’s PRICEY! I’d be interested in hearing what people think of them.

Generally speaking, the L.o.F. beers I’ve had have been excellent. Of course, I’m not spending $15/22oz. for them (which seems to be the going rate around these here parts) … instead, a few bars around here have them on tap, so I take advantage of the opportunity to get a glass when I see them on tap (usually served in portions ranging from 30cL to 50cL).

The ones I’ve had:
Fall Wild Ale: good, but not great. Kind of like a lighter Belgian ale, with a good amount of hoppiness
La Folie - Sour Brown Ale: simply awesome!! If you like sour beers this will be right up your alley.
Le Fleur Misseur: another awesome one. Had this for the first time last weekend – a very nice session beer.
Bierre de Mars: very nice – very similar to Le Fleur Misseur, but a bit sweeter and fruiter, whereas the Fleur Misseur is hoppier, and more floral.

one of the first times I visited the Stone brewery I found out about something they call a “Smoky Indian”: 2/3 IPA, 1/3 Smoked Porter — super delicious!!! I’ve been perturbing bartenders with such requests ever since – my favorite version thus far is 2/3 Racer 5 IPA and 1/3 Stone Smoked Porter. I can only imagine how fantastic this combination would be if I used Samuel Smith’s Porter.

My approach to beer is utilitarian – I look around at Costco and get a case of whatever looks the most interesting.

I found an Oktoberfest beer that I rather liked, but those are gone. Now I would like to buy the Sam Adams Winter Lager but they didn’t have it so I just got a case of the Boston Lager. I have asked for a set of the Sam Adams special glasses for Christmas (the description sounds like something Riedel would come up with, has anyone heard of those?).

One reason I buy beer is because a couple of bottles is enough, I don’t keep sipping it all evening. With wine it is harder to stop…

FWIW I should point out that I have a selection of good Belgians in the cellar, including Westvleteren. I -know- about high end beer, and I like it on occasion. But it’s not really part of my collecting hobby.

Decent stuff but nothing outstanding lately:

Need to make a beer run to the liquor store to pick up some Dead Guy.

Thanks for the reply - I LOVE sour browns - one of my favorite types. I’m headed to the best beer bar in Seattle on Wed (Brouwer’s), and hope they have it in one of they many taps.

And maybe I’ll break down and get one.

Just popped this 24 oz bad boy. Sharing with my better half. 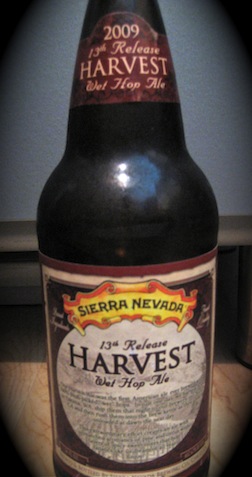 Just popped this 24 oz bad boy. Sharing with my better half.

Thanks for the reply - I LOVE sour browns - one of my favorite types. I’m headed to the best beer bar in Seattle on Wed (Brouwer’s), and hope they have it in one of they many taps.

And maybe I’ll break down and get one.

if you LOVE sour browns there should be no “maybe” about it – get a La Folie!!! IMO, it’s better than Monk’s Flemish Sour Red

Recently I’ve been drinking a lot of beer. I’ve been brewing too, so about 1/2 of my consumption is homebrews and the other half is a rotation of:

What are those Traquair’s like? I’ve seen 'em, but never tasted one.

About as dark, rich and malty as possible while staying in the caramel / toffee / malt spectrum and not tasting like a coffee or chocolate. Kind of biscuity / bready but still not like porter. Moderately bitter, moderately sweet, no overt hops. Pretty big but not huge (7% or so each I think), very complex, very full bodied, very satisfying. One of the best beers (to my tastes) I’ve discovered in the past year or two. Bummer on the price, but qualitatively they are up there w/ top Belgians for me, at least based on having had a half dozen or so of them.

Oh, should add to my list, I’ve had several Sam Smith’s Nut Brown Ales lately, always a win for my tastes, and I drank several Gordon Biersch Maerzens a couple weeks back and remember thinking it was the best Gordon Biersch beer I’ve had – still not great, but better than the many disappointments I remember from them.

Been liking this one recently:

Aside from that, had some Saranac Caramel Porter that was quite tasty and full-bodied without it being overly sweet.

We went to Higgins in Portland last night, and I made everyone break away from the 96 Clos des Goisses we were drinking (which went really well with the truffle risotto appetizer we had) to try a Trappiste Rochfort #8 with the salad course. Perfect match.