I didn’t see one for the new year yet, so I started this one. Post away.

Edit: Here’s a good interactive graphic site that will allow you to keep up:

Looks like too much of a good thing…levee failures in Sacramento Valley and another very wet series of storms on the way.

Water received over the last week has soaked in nicely. The forecast for Calistoga is for rain every day through Sunday at least. 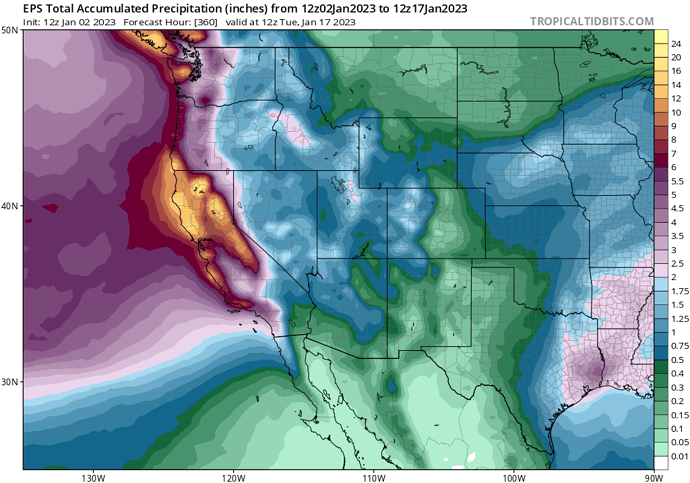 Wet antecedent conditions set stage for future flood risk There's so much going on at the moment this section is going to be shorter than recent events would usually justify, but here...

Subsurface drainage is moving lots of water. I’m way up in my irrigation pond – about 2 feet from full, and I’ll get that by the weekend.
The only drag at the moment is a real disappointing cover crop. I’d have liked to have had a better stand before the heavy rains hit. It looks like that’s pretty universal – around me none of the grass growth even in uncultivated areas is very robust/

Yeah, another big system coming in, from tonight through Thursday with tomorrow probably being the strongest rain. Unlike the last storm, I think this will follow the more typical pattern of mainly hitting the coastal mountains and north of the Bay. So, Anderson Valley may do well. Haven’t looked at what is predicted for the Sacramento area, but they don’t need any more rain right now and will certainly get some, as Casey pointed out.

Any flooding worries in Napa/Sonoma?

There is a flood advisory for the Russian River, I think also for Napa although lower level of concern. The RRV has areas that are pretty easily flooded.

Looks like near Guerneville for sure . How bad/impactful , TBD.

I think Guerneville is expected to flood a couple of times.It’s in a particularly flood prone location and there are a series of storms coming.

Not sure how much rain Anderson Valley and other parts of the north Bay received in atmospheric river round two. We received quite a bit less than on 12/31, maybe a third as much but that was expected. As far as I can tell, Guerneville hasn’t flooded, although it’s expected to after the next round or two. Most of the damage was from the winds, the massive waves along the coast, and some heavier rain in the coastal hills or on very saturated soils.

Any updates after the latest round of storms?

Posted this in a different thread, almost up to date (although has been raining today).

Here is a summary of 2022-2023 rainfall in CA to date compared with normal to date and annual average.

I think Anderson Valley vineyard reservoirs should be doing pretty well at this point.

That’s a great chart. Thanks!

I think Guerneville in the RRV ended up flooding less than originally predicted, but there are lots of areas around California that have some flooding, especially in coastal areas. Here is a video from near the entrance to Tablas Creek in Paso Robles. There is also some flooding around the town of Paso Robles, pretty similar in a lot of wine growing regions with mostly localized flooding at this point. Much worse in towns like Santa Cruz, Capitola, Santa Barbara where they have been hammered by runoff from the coastal hills and large waves from the ocean. Lots of rock slides and mudslides from saturated hills.

Calistoga has been hammered for days…weeks? And wild wind -usually coming in the wee morning hours. Forecast is for more of the same.

Walked along Alameda Creek yesterday, which doubles as a flood control channel for the runoff out of Niles Canyon (an important road that cuts through the hills, and currently closed due to flooding and rock slides). Most of the year it’s almost completely dry, there’s a small flow sometimes mandated for the steelhead. This is as much water as I’ve seen flowing for quite a few years, though there have been times it was half way up the banks. 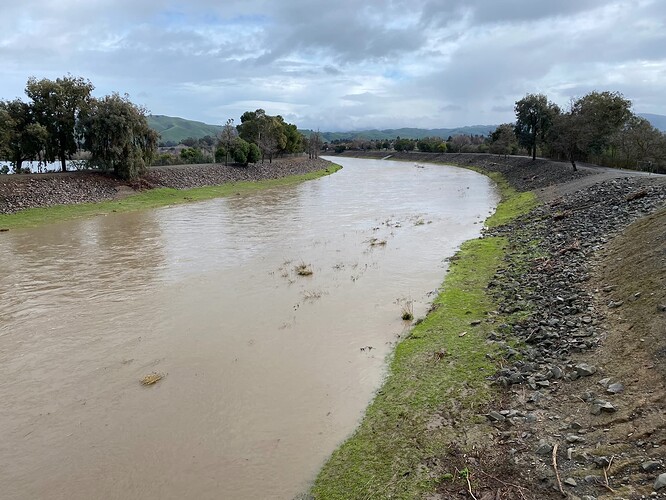 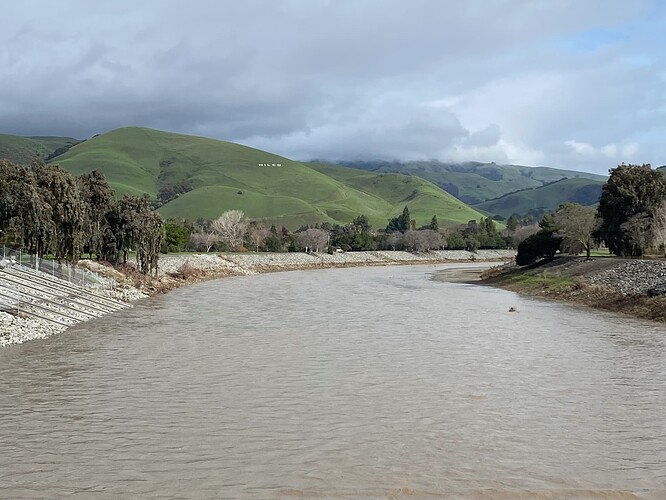 A sunny but cold morning - 33 degrees when I woke up! The cover crop is showing its stuff, with rain in the ground and sun in the sky. Mustard is starting to show in many places.

It’s sunny around the Bay Area today. Theres a minor storm coming through wednesday, but shouldn’t have much impact, then dry weather on the horizon, through the end of the month. If things go as recent years have gone, we might not have another storm this season. Half joking, but that’s how the past two years were.

There is a lot of localized damage from flooding, mudslides, sink holes, etc., all over the state, but it is indeed localized, not like the widespread damage we see from hurricanes, midwest spring floods, etc. 99.99% of California is fine.