What is this: 2004 Scholium The Lydian Queen Oro Puro Vineyards

I was searching through some wines and came across this bottle in .375 ml format. It is from Scholium Winery, labeled as 2004 “the Lydian Queen” Oro Puro Vineyards. I thought it to be a dessert wine, but the alcohol level is 13.1% which makes me think it might be dry(ier). Any idieas? 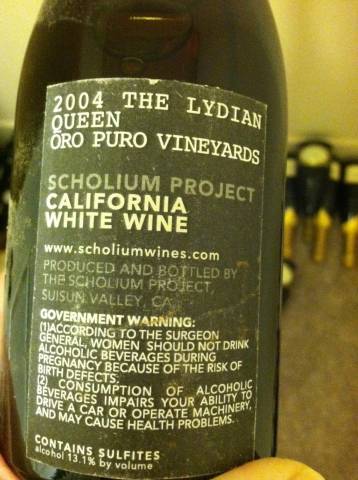 It is a fantastic dessert wine. I actually bought a bottle over to an offline last holiday season at board member’s house. It’s actually hard to get since only 25 cases were made I believe. You are in for a treat. 85% sem and 15% sauv

Do you remember if there was anything unique about how it was made? I remember he made the dessert wine for Oro Puro Vineyard and I thought this had to do with an “experiment” with left over wine in a barrel or something. I of course could be making this up.

I was searching through some wines and came across this bottle in .375 ml format. It is from Scholium Winery, labeled as 2004 “the Lydian Queen” Oro Puro Vineyards. I thought it to be a dessert wine, but the alcohol level is 13.1% which makes me think it might be dry(ier). Any idieas?

Sauternes and some other dessert wines can be very sweet and have alcohol well above 13% if the grapes were picked very late and/or were botrytised.

I have a bottle somewhere and I have had it three or four times. There is some bottle variation with a lot of VA in some bottles. I had one bad one and a bunch of great ones. If I recall correctly, it was not actually a Scholium wine bad was made by Abe Schoener for someone else. I will send Ane a message and see if he will post and explain. I frank this side by side with the Alban dessert win about 5 years ago at the Pratts Offline in New York and most people liked the Oro Puro better.

I do not recall what it was called but that was not it. I think it was viognier based.

I do not recall what it was called but that was not it. I think it was viognier based.

From the original offering:

“It is saying too little to call this a sweet wine. It has 15% residual sugar, and the viscous texture of warm honey. This wine descends from the 2004 harvest of 50 brix botrytised semillon for the Oro Puro project. The grapes were no longer in distinct bunches at harvest, but arrived at the winery as a kind orange marmalade flecked with furry gray marbles. They were crushed and destemmed (by hand) to maximize the extraction from the botrytised skins, and fermented on skins, with seeds, until the fermentation stopped some time in March. We acheived a total of less than 30 gallons of wine-- that looked from the beginning more like maple syrup than any wine. Some of this absurdly sweet liquor went into the 2003 Oro Puro, some was blended into 2004 Oro Puro bottling, and the tiny remaining portion of about 18 gallons was consigned to the Scholium Project for distribution to its fans of somewhat non-standard wines. In order to make the wine even somewhat drinkinable, we blended the dense remainder, which had concentrated further due to evaporation in its half-filled 30 gallon home, with about 7 gallons of 2004 Oro Puro normale, from a stash I had secreted for this purpose.”


The wine was too extreme to release under the Oro Puro label.

As Jay said it has had some bottle variation and someone on the other Board referred to it as the Grapes of Ass.

Brought one bottle to an off-line. It was undrinkable (VA and seemed oxidized) and so terrible that I stopped buying Scholium wines.

thanks to robert and jay and the rest of you for the information. the notes from my website that robert cited are accurate in every way. I think that it is the smallest production wine that I ever made. I made the wine in a sense for myself and in a sense for the goldmans of oro puro. I have been their winemaker since the first harvest-- in fact, they were the first people ever to hire me to make wine; and, out of fondness for the project and respect for their trust, they are the only people that I have made wine for since 2007. we harvested this fruit super late under the inspiration and castigation of steve matthiasson: we had already harvested all of the grapes that we thought were useful for oro puro about a month before, in early november. I had decided not to pick some of the semillon, thinking that a) we had enough to balance the SB, and b) some was just too swollen with rain and/or rotten to make wine from. then, some time in december, jonathan goldman and I got scolding phone calls from steve telling us that our fruit was finally ready to pick. I went to the vineyard, and for the first time ever, saw the carpet of botrtytis that we had been looking for-- instead of the partial spotting of the some of the grapes. this marked a turning point in the OP winemaking; from then on, we have harvested in december (we have not harvested yet this year) and achieved an initial brix near 50.
in 2004, I destemmed the fruit by hand; I think on Christmas day, and put it through some old Italian machine (kind of like a hand-cranked blender) that I had borrowed from George Vare. This produced the marmalade (not juice) that took 3 months to ferment.
My sincere apologies to Peter Petersen and whoever dubbed the wine “the Grapes of Ass.” I was still learning about microbial stability and earnestly thought that if the wine was stable after 24 months in barrel, that it would remain stable after months or years in bottle. Now, I would not take the same chance. Any wine that offered that much food (15% rs) to the world of microbes-- such a wine I would either filter or sulfur highly and sell with a clear caveat. I regret these early mistakes and customers that they justifiably cost me.

ps: tasting notes? I have only opened about 4 bottles since I bottled the wine. the last two (together) were at a dinner in NY. the wines do not show anywhere near the sweetness of 15% rs.there is indeed bottle variation, but all of the bottles that I have opened have been delicious. what I notice is the variation in oxygen uptake. some of the wines have been brown-- like maple syrup, and madeirized in the positive sense of madeira. some have been golden and more reminiscent of vin santo. none is dry-- that would be a tremendous amount of ass generated from 15% sugar-- but none has seemed as sweet as many dessert wines. this I think is because of post-bottling VA (yes) but also because the wine is so strong, concentrated, full bodied that it dwarfs and envelops the sugar.

Abe, Thanks for posting and your brutal honesty.