Visit with John Thomas - Carlton, OR

I’ve been getting wines directly from John Thomas since the 2002’s were released and hope to do so for as long as he makes them. On a bit of a lark, I decided to drop him a note to see if I could visit the next time I was in Portland. We’ve all heard the rumors about him enjoying his privacy so I didn’t think my chances were particularly good but I figured there was nothing to lose. We had corresponded in the past over changes in address, broken wax seals on magnums, etc… so I thought there was a chance. Much to my delight, the day I was flying out I got an apologetic email inviting me to visit if I still had time with the understanding he is a 1 man show so its hard to plan in advance. Needless to say, I made the time.

Beautiful drive out to Carlton and with a few wrong turns eventually we arrived at the winery. Not surprisingly, it is off a dirt road and without a sign. There is one identifying feature though that clued us in. 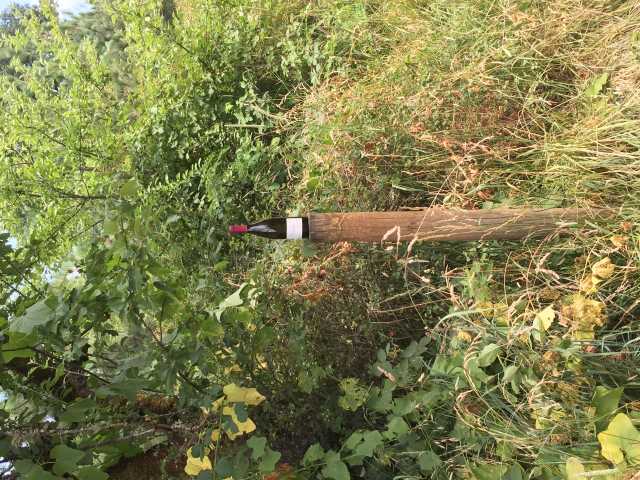 We met up with John outside his winery where he was doing some daily chores. If you look carefully you can see the vines in front that he was planning on planting in the coming day. He explained he had built the winery to be gravity feed and easy for one person to manage except for harvest and a few other busy days. The interesting thing was he explained how hard it was to find someone to help with this type of business model but eventually he met a winemaker in Santa Cruz that set him on his way.

We walked through the 4 acres of grapes. He showed us the row of nebbiolo that he planted for fun. He told he has never bottled it separately because it never ripens enough. He told us how one year he had expected it to be all picked apart by the birds when he had left it on the vine after picking the pinot and much to his surprise it was still there. Apparently, it was too acidic and unripe for even the local birds who had gotten a taste for sweeter, riper grapes. 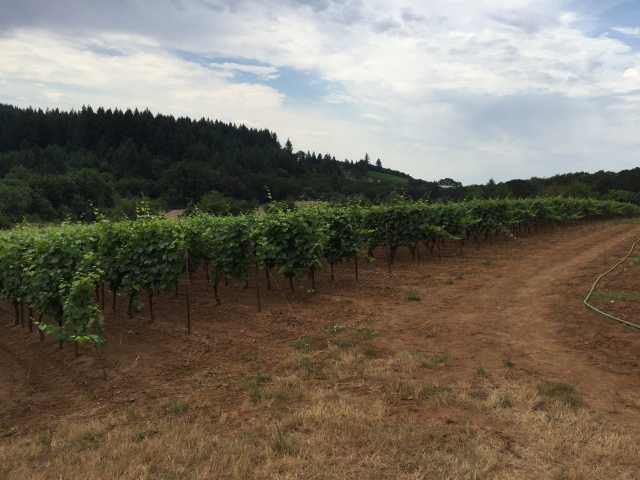 We showed us where the phylloxera was slowing killing the vines and explained the need to replace them over time. He keeps his rows all dirt so as to help in times like now when it is so dry. All in all an amazingly neat and well kept vineyard. Fascinating stuff.

We then moved to the winery where he showed us around. Very compact space with one part of the cave for barrels. Everything is kept in barrel for 2 years before bottling. We tasted both 2013 and 2014 from barrel which were quite similar to my palate. The whole time we had an easy flowing conversation about how he came to making wine from being a geologist, family, politics, the history of Oregon wine, his one-time interest in making a sparkling wine (too expensive), succession plans, etc… It was striking to me how it felt like we were talking to an old friend. Just a fascinating and yet exceedingly normal guy. He explained how he only kept a few cases for himself and that is was important to him to have the ability to move his wine out in the month or so after bottling because he needs the space for the next harvest.

The longer he explained why he did it the way he does, the more it made me wonder why people would do it differently. By having such a hands on approach and doing it all himself, he is able to make decisions based on ideal timing rather than be driving by competing interests such as multiple crops, picking schedules, space, etc… I think that is why he seems to always excel in years that other winemakers find troubling.

We said our good byes and headed out. All in all, one of the coolest days I’ve had chasing this hobby. Oh, and he did tell us his cellar landline phone isn’t currently working. He explained he had planned on fixing it and then got distracted. Over time he realized he kind of liked not being interrupted with his work in the cellar. His final explanation was that his friends know how to find him, people can email and folks can always write a letter if all else fails. After spending time at the winery, it made a ton of sense to me. 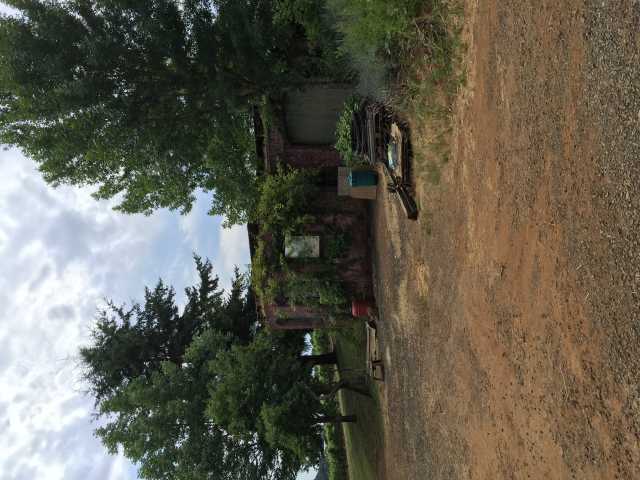 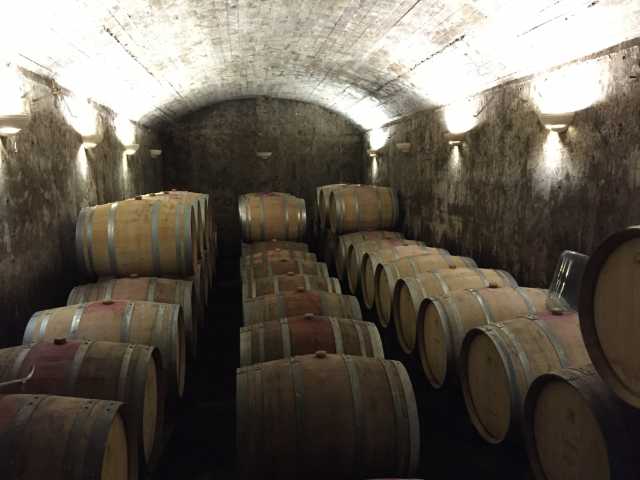 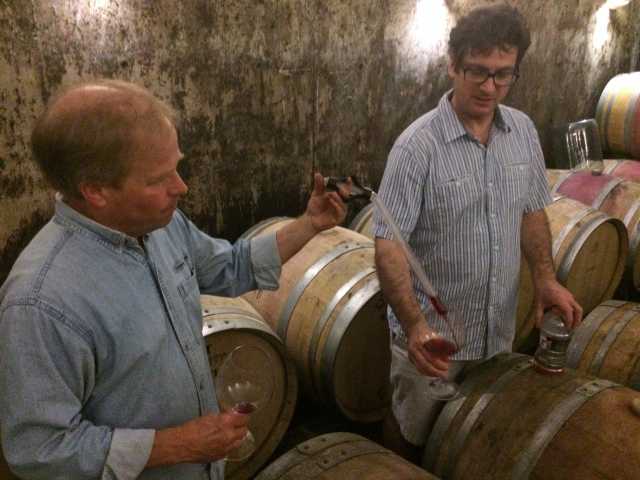 James, thanks for sharing! A very…very rare treat. One of a kind.

Very cool. I had no idea he had email!

James,
I visited in about 1998 and it doesn’t look much different.
Which is instructive, I think.
Best, Jim

Very nice. Thanks for sharing!

This is only the 2nd or 3rd time I’ve ever heard of anyone being able to visit. Thanks for posting.

Thanks for the thoughtful write-up. There’s something Salinger-like with the Thomas persona. Or at least the public perception of it. Typewritten correspondence, unmarked driveways, etc.

Not suggesting he’s a privacy freak like J.D., but I appreciate you giving us a peek into his operations.

And to really overplay the analogy: His wines are like Salinger’s prose – clear, direct, spare, energetic.

James – Thanks for the write-up. It looks identical to when I visited in 2008, when the '06’s and '07’s were in barrel – except, I didn’t get the bottle on the fence post! (John’s obviously increasing his marketing efforts.

) How would describe the '13’s and '14’s? Are there comparisions to prior vintages?

To be honest, the more we talked to him the less he seemed to match up to some of the public perceptions of him - Salingeresque if you will. He seemed fairly intent early on of coming up with a business model that allowed him maximum flexibility, the ability to do what he wants and economic efficiency. Apparently it took him awhile to find someone who also followed this approach but he did but this was after working in Napa for a few years. My guess is that he also had limited resources when he started so his model decreased initial capital outlays. As he described it, almost everyone was starting small back in the 80’s and early 90’s in Oregon but they all ended up growing. Clearly he thinks his model is superior. In a generally low margin return business, being able to keep labor costs low, manage quality and sell your bottles predominantly to consumers and not distributors makes sense. And again, he was an amazingly personable guy. It did not match up with what I was anticipating.

One funny aside. I thanked him for keeping his prices reasonable at a time when some of his contemporaries like John Paul are pushing prices up quickly. His sincere response is that he needs to ensure that he has moved all of his inventory in the window that he has the available space. He worries that if he raised prices too much he would lose direct sales to his customer base. Kind of funny to think about. My guess is he has a lot of elasticity in his price. I’ve often wondered when you only make 400 cases of wine with his popularity how do you still have an open mailing list and don’t allocate offers.

All in all, he has an extremely logical, and obviously thought through, business model. The more I talked to him the more it made me wonder why others don’t do it this way. So it really seems more based on a business model rather than a desire for privacy although I got the sense he is pretty happy hanging out by himself at the winery.

Greg, I rarely try the wines when they are released. I generally wait a few years before I crack any of them open and for the most part, I wait at least 5-6 years. We tried them out of barrel, one sample at a time and my palate just isn’t strong enough to really articulate the differences. My limited experience has been that his wines don’t always follow the generic vintage trends not that I even know what people think about '13 and '14.

Very cool - thanks for sharing!

I wish I had bought a full case rather than a half.

Thanks for posting…I have been on the list several years, and had a few conversations with JT on the phone. I offered to come out and assist during harvest and he politely directed me to some of the larger operations ; )

We do have that East Lansing, MI connection…perhaps I will write him a letter soon…

very, very cool. thanks for posting- definitely a rare treat- the haley’s comet of tastings.

A great wine, year in, year out. I’m on the list and I’ll buy as long as I get the mailers!!