Did anyone else get the Total Wine Pappy Offer yesterday?

For anyone interested: the offer is for one bottle only out of the list below, online, on a first come first served basis next Tuesday at noon. As far as I can tell it was sent only to Grand Reserve rewards members (single use, unique code).

Does anyone have experience with it in the past? What are the chances of actually getting a bottle of Pappy? Any technique I should employ given that the offer states there will be different availability depending on which store you select for pick up?

They haven’t done it this way in the past. Last year for VW, the emails came out and you had to rush to a centralized store immediately (and you got to select 2 from what was available…1 of the ORVW/Lot B group and 1 from PVW. For BTAC, you had to queue up at a centralized store at the butt crack of dawn…1 per GR customer.
The year before, you got an email directing you to hustle on down to your selected store where you could pick 1 from the VW lineup of what was left.

I ~think~ store selection shouldn’t matter as much this year as it sounds like the availability is based on state allocation then your pick is sent to the store you select when shipment arrives 8-12 wks later.

Thanks for the info Bill. This is my first year as Grand Reserve, so I have no knowledge of the history.

Since I can get to MD or VA relatively easy for pick up should I target one State over the other? My guess is that VA will have more stock (because they have more stores) but that might also mean more competition for what they have

Yeah, first year with this method. I like that you can only pick one bottle out of all the VWs and BTACs. Spreads the bottles around. Hope their server can handle the traffic, some sites that do this kind of online first come first serve crash right when it starts…Yes, I’m looking at you Bevmo.

My guess is that PVW 15. 20, 23 will sell out right away, with Saz 18, WLW and Eagle Rare 17 close behind. WLW is interesting this year cuz they made so much of it. And tons of GTS and THH. ER 17 isn’t usually the most wanted BTAC but bottle count is so low this year. I think you’ll have to be strategic because if you don’t try for your most wanted BTAC first and try for PVW and strike out and attempt to try to get a BTAC as a second choice, those might be sold out immediately also. Really depends on bottle allocation for each state and how many Grand Reserve members are in each state. There are so many GR members in CA that I expect everything to be gone very quickly in CA with the possible exception of ORVW as there are so many bottles of that.

Kinda nuts how bourbon has jumped the shark over the last 5 year’s. Any semblance of a Limited Edition sells out in hours. Not sure if it’s flippers or newbies getting into the hobby.

Waiting for that e-mail…

Waiting for that e-mail…

Are you a Grand Reserve? Everyone I know that is GR got the email yesterday.

Thanks for the info Bill. This is my first year as Grand Reserve, so I have no knowledge of the history.

Since I can get to MD or VA relatively easy for pick up should I target one State over the other? My guess is that VA will have more stock (because they have more stores) but that might also mean more competition for what they have

I don’t believe they’re offering them in VA given it an ABC state. MD has two stores but Laurel (right down the street from my brewery) gets way more than the Towson store. I’d say opt for Laurel which should improve your chances or opt first for their largest store located in DE right across from the MD border.

I remember last year, an email was sent out to Reserve members too and it wasn’t online; they made us come to the store and first come first serve.

Anyone successfully get through?

Lol, I can’t believe they didn’t expect for the site to crash…

Surprised you were even able to get through with the phone. People are reporting they can’t even do that hahaha. TotalFail

Got off the phone with TW. They are going to reschedule the release at a later date. No word on when. Look for an email later this afternoon.

I am so NOT surprised this happened. It ALWAYS happens on first come first serve when an e-commerce site has never done this type of thing before.

Thanks for the confirmation Joe, I was seeing the same info on twitter but wasn’t sure if it was trolling or not.

I was told this Thursay, same time. Have doubts they can address the server issue that quickly.

Stupid approach. I would have preferred a lottery. 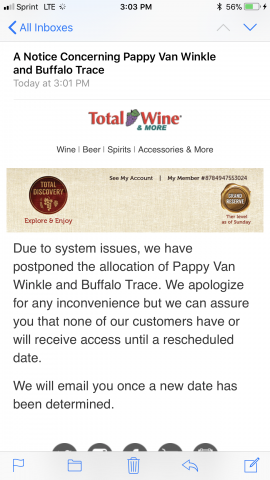