03 Branaire Ducru [St Julien] I was skimming someone else’s TN when they mentioned this, which prompted me to pull one. Served a touch warm, 70F, from a half bottle. Just pop and pour. 14% abv on the label, but doesn’t seem heavy at all. Medium bodied. I get some anise, warm spices on the nose. Very smooth on the palate, no raspiness nor astringency. Has that great blend of drinkability, balance, and richness that the 1990 St Julien’s had. No lightening at the edges yet. Long 40 second finish, with hints of butterfingers/hazelnuts here too. I found the 03 Medocs to be so charming that I drank up many early, while waiting/hoping for firm years like 95 to round out, so am glad to still have these left. Perhaps with USD strength there is a chance to get a second crack at some of these. Although I found this vintages right banks to be hot/flabby/unbalanced and generally worsening over time, the other side has been good. I think this still has lots of great years ahead of it. Solid A.

Thanks for the note. Have a few of these. Might be time to pop one. Generally agree with your comments re: Right Bank '03’s

Thanks for the note. This is a helpful date point.

Thanks for the note Arv.

I’m not as blown away as you are, but I had rated it just a notch lower and will admit that the last I had it was a couple of occasions during the release period. It’s good to see your data point as it was one of my preferred claret from the vintage and have a few that are stashed away.

While I’ve only had a smattering of Branaire from the 80’s onwards, I don’t recall having had one that’s at least as memorably good as the 2003. The 1989 vintage comes to mind as a close 2nd placer.

Fruity, meaty, oak on the nose. Gentle with the warm vintage dark berry ripeness and sweetness that worked well within a balance that included cinnamon, some green, stems and spicy notes. Good length.

Imo, up there with another Saint-Julien wine, Leoville Barton, that did not disappoint from the vintage. 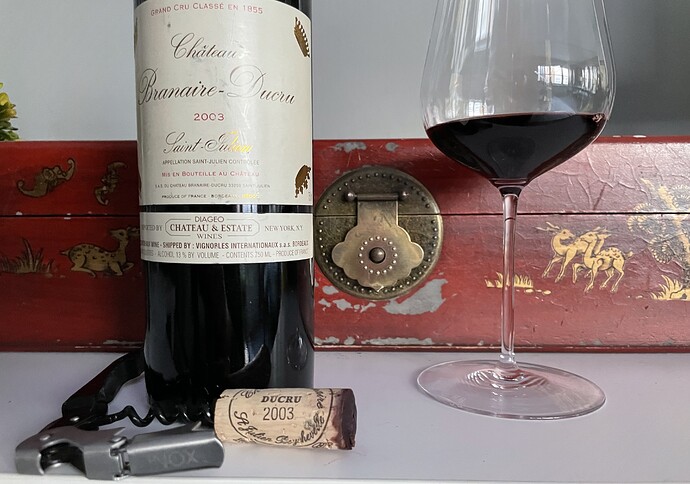 Thanks for the update. I need to dig one (or two) out of the cellar.

I tried a 2004 Branaire last year and it was frightfully closed and backward after 90 min. decant – surprisingly. But I realize 2004 is not the open vintage that 2003 is. I never like the '96 Branaire, and the 2000 is still hiding a bit. The only Branaire that I always thought excellent was the 1982, but those are fading a bit now.

I’m interested that so many of you bought 2003s. I’m afraid that may jeopardize your AFWE standing.

Who said I “bought” them?