I’m also curious about this wine…

I know Manfred on occasion does read and reply in these forums - maybe we can get his attention here asking for more information.

My biggest question is will the Touriga Nacional bottling be 100% of that varietal or a blend?

More on the varietal … “Touriga Nacional is a variety of red wine grape, considered by many to be Portugal’s finest. Despite the low yields from its small grapes, it plays a big part in the blends used for ports, and is increasingly being used for table wine in the Douro and Dão. Touriga Nacional provides structure and body to wine, with high tannins and concentrated flavors of black fruit. Jancis Robinson has compared its relationship with Touriga Francesa to the partnership between Cabernet Sauvignon and Cabernet Franc, the former providing structure, the latter filling out the bouquet.[1]”

looking forward to tasting it

I have had Touriga National from Portugal blind. Once at a Berserkerfest at my house. Poured by a “civilian” friend of mine. Brad Cohello and I both said it tasted like a dry port, not knowing what it was. I have not sensed that in any of the SQN bottling or the most recent delivery of NoK, which its the first one I ever tried.

I have a strong hunch the 2015 Touriga Nacional Numero Um bottle from Sine Qua Non’s Next of Kyn will be remarkable! Just sayin’

I think that the vineyard and climate probably lend themselves to this variety as they proximate Portugal’s growing region. Should be a stunner IMO.

Got the letter today and indeed the Touriga National Numero Um is indeed 100% Touriga.

Page 2 of the 2015 NoK release letter confirms this.

Got the letter today and indeed the Touriga National Numero Um is indeed 100% Touriga.

Page 2 of the 2015 NoK release letter confirms this.

Thanks for posting. The pic is a bit out of focus when I zoom in to read it, but I should be getting my letter any day now. 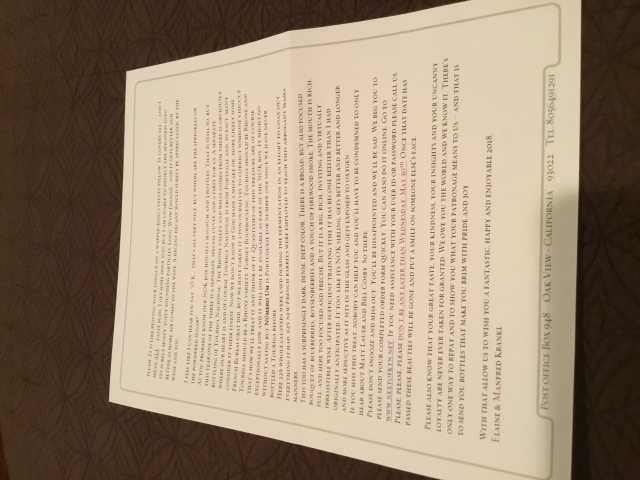 Just in case folks are curious & are having trouble reading Charles’ scan, here is the excerpt on the Touriga Nacional bottling from the release letter:

As you probably know our NoK box houses 1 magnum and 3 bottles. That is still so, but this year one of the three is a separate, special cuvee and a first for us. A separate bottling of Touriga Nacional. The Rhone Valley and what comes from there is obviously where our heart is and of course Touriga Nacional is from Portugal and, in fact, many consider it their finest. Now we don’t know if God made a mistake or, more likely some French bureaucrat did, but we have taken it upon ourselves to correct someone’s hiccup. Touriga should be a Rhone variety. Forget Bourboulenc. Touriga should be Rhone and that’s how we’ll treat it and think of it. Quantities of this treasure are of course exceptionally low and it will only be available as part of the NoK box. It might go without saying but Numero Um is Portuguese for number one since we have never bottled a Touriga before.

Here 22% whole clusters were used during the fermentation in an effort to coax out everything it had. 62% new French barrels were employed to teach this arrogant mama manners.

This too has a surprisingly dark, dense, deep color. There is a broad, but also focused bouquet of blueberries, boysenberries and a touch of firewood smoke. The mouth is rich, full, and here too focused and precise. But it is a big, rich, inviting and virtually irresistible wine. After sufficient training time it has become beefier than I had originally anticipated. It too, like its NoK sibling, gets better and better and longer and more seductive as it sits in the glass and gets exposed to oxygen.

After reading that, I’m excited to eventually try it!

Thanks for posting this YacobovE – did you OCR scan that?

Thanks for posting this YacobovE – did you OCR scan that?

In a sense yes…I just typed it up quickly

Just got notification that it shipped today!