I’ve posted a portion of Part 3 of a report on an early January three-day wine tour with friends Eric Anderson and Michael Poston to Napa and Sonoma wineries and tasting rooms. I’ll post the rest of Part 3 soon. The full version of this report is on the Grape-Nutz.com website:
Napa and Sonoma Visits – January 2020 – Part 3


MacLaren Wine Company
We had an easy drive from Santa Rosa to Kenwood, and pulled into the parking area of the MacLaren Cottage off of Adobe Canyon Road. The MacLaren Cottage is the new tasting facility for Steve and Heather Law’s MacLaren wines – they moved out of their old Sonoma Plaza tasting room in 2019. Steve was ready for us when we arrived, and he welcomed us into the cottage – a renovated old farm building adjacent to Steve and Heather’s home. I’d first met them in early 2014 at a Rhone Rangers tasting event, and I was immediately impressed with the cool-climate Syrahs that they poured that day. I’ve visited Steve a couple of times since then, but it had been a few years so this seemed like a good time to catch up with him and taste his latest wines. 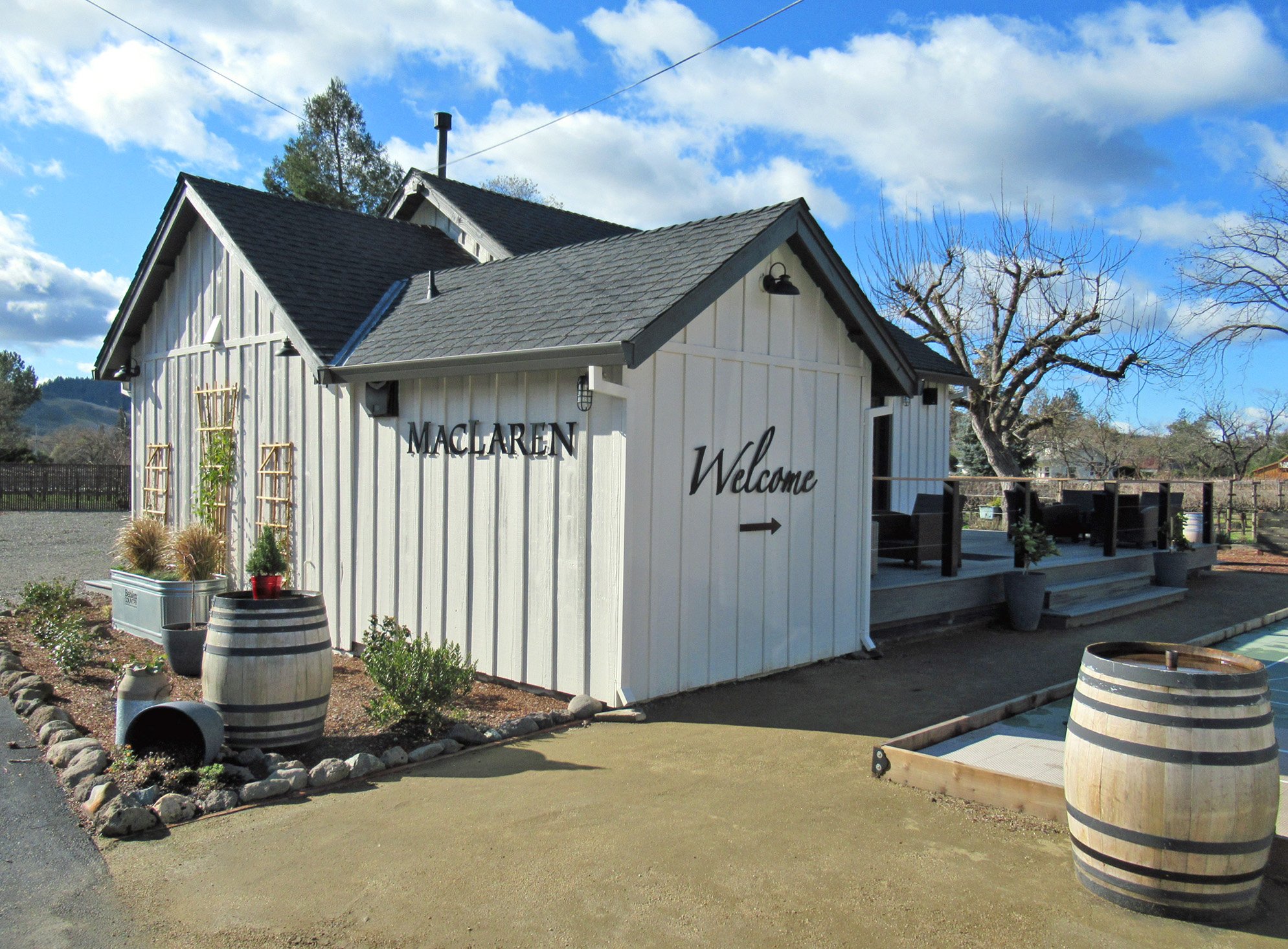 Steve is originally from Scotland, and he retains his charming accent. The winery name comes from the Scottish Clan MacLaren, of which the Law family is a part. Steve’s background is in the electronics field – some years ago, his company relocated him to work in southern France, and during his ten years there he took a liking to many French wines, particularly the Syrahs of the northern Rhône Valley. After relocating once again for business to California, Steve got to know Michael Talty at Talty Winery in Dry Creek Valley. Michael offered Steve the opportunity to work during crush in 2005-2006 – Steve told us that Michael didn’t really expect him to show up on the first day and was surprised when he did! Steve also began taking a number of UC Davis Extension winemaking courses, and by 2007 he was producing his own wine, four barrels of Syrah. MacLaren has grown from that initial vintage to 1,200-1,400 cases per year – mostly sold direct to consumer – and the label became Steve’s full-time job in 2011. The wines were made at the Talty facility through 2015, and Steve moved the production into his own winery space on 8th Street in Sonoma the following year.

MacLaren has specialized in small lots of Syrah from cool-climate vineyards – mainly from Russian River Valley and Bennett Valley – and although Steve has since branched out to a few other grape varieties, Syrah remains what the winery is best-known for. He noted that Syrah vineyard sources can be tough to find in these cooler growing regions, but that they typically provide flavors to develop in the fruit without the higher sugar levels found in warmer-climate fruit. Most of the MacLaren Syrahs range from 13% to 14% alcohol and have been known to dip below 13% on occasion. MacLaren added Sauvignon Blanc to their wine line-up in 2012, Pinot Noir in 2013, Syrah Rosé in 2014, and Viognier in 2016. Steve mentioned that he switched to DIAM corks beginning in 2017. These “technical” corks, made from natural cork particles, are being seen in more and more high-quality wines, to help provide more consistent bottle aging and to virtually eliminate the possibility of cork taint.

The MacLaren Cottage interior is a bright and pleasant space, and includes a kitchen as well as the tasting area. We took seats around a table in the tasting area, and Steve talked with us about his winemaking inspirations and goals. Having spent a decade experiencing the combination of wine and food in southern France, it’s no surprise that Steve seeks to craft his wines in a food-friendly style. Steve mentioned two particular northern Rhône vintners, Yves Cuilleron and François Villard, who have been inspirations and have now become friends – in fact, Steve collaborated with Cuilleron to make a Côte-Rôtie style Syrah in 2017. Steve told us that he particularly likes Syrahs from the Saint-Joseph appellation of the northern Rhône. He aims to retain bright acidity in all of his wines, and he also works to manage Syrah’s sometimes-aggressive tannins. All of the reds are fermented with native yeast and both reds and whites are aged in neutral French oak – Steve wants to avoid new oak influence in the wines. 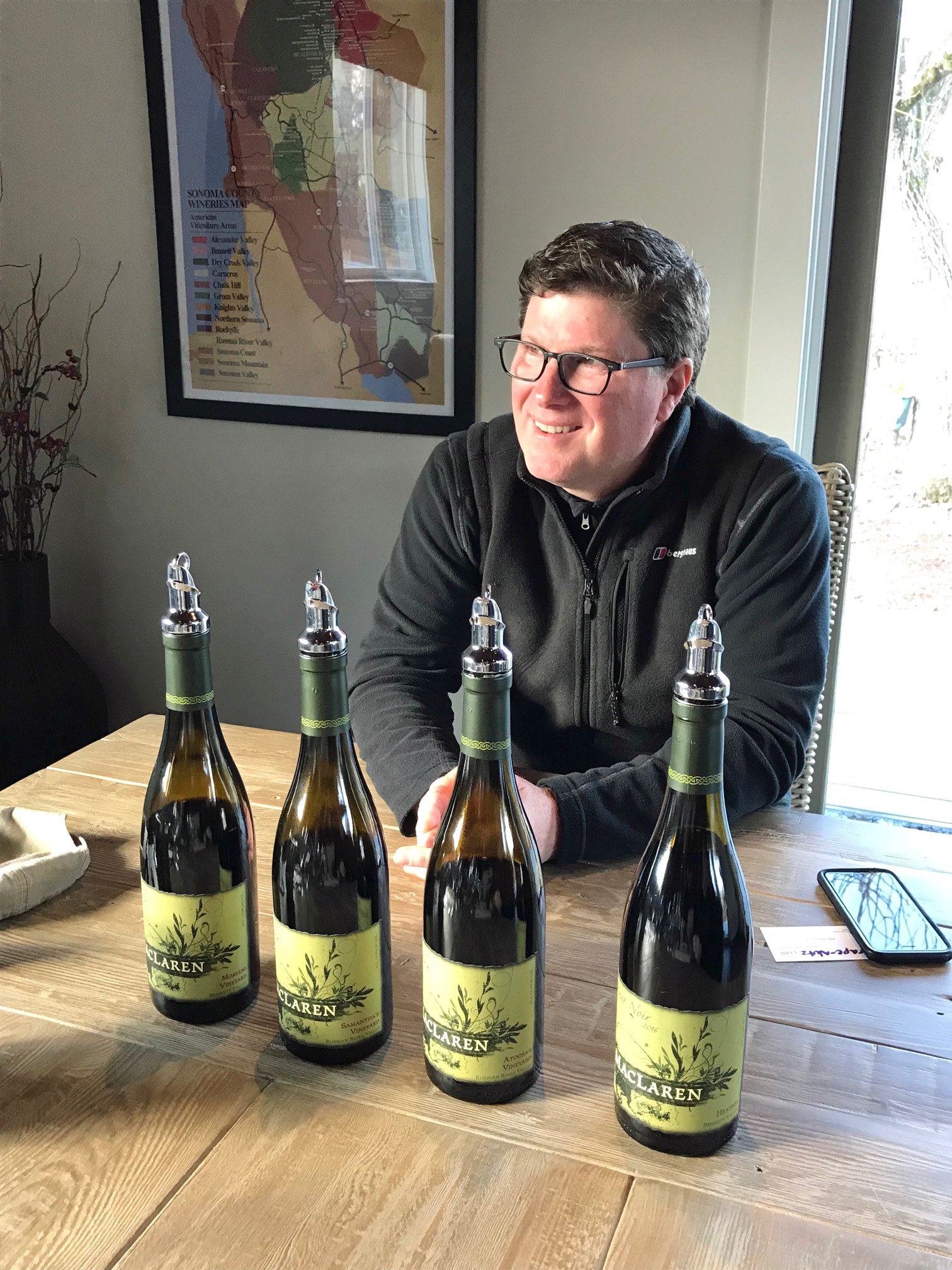 Steve brought out a dish of cheese and dry salami to pair with the wines we would be tasting, and he pointed out specific cheeses that would go particularly well with certain wines – I’d have to say he was spot on in his selections! He told us that his new tasting arrangement at the MacLaren Cottage is by appointment only, and that it’s been quite busy. He’s been happy that the customers who have come in to taste there have generally been very knowledgeable about wine.

Steve started us off with two white wines – he told us that he picks the fruit for both based on acidity, and stirs the lees in the barrel to add texture. Steve prefers barrel fermentation and aging for his whites rather than stainless steel, as he feels the texture gained from the neutral barrels allows for the higher acidity to integrate into the wine without standing out. The first wine was the 2018 “Lee’s” Sauvignon Blanc, made for Steve’s mother Lee, and inspired by wines of the Loire Valley – the fruit comes from a vineyard in the southern part of Dry Creek Valley. The wine displayed citrus, fresh herbs, and floral aromas, with a round mouthfeel balanced by lively acidity and a crisp finish. Next was the 2018 “Aida” Viognier – this wine is named for Steve’s mother-in-law and aims for a Condrieu style. The vineyard source is from a cool site for Viognier outside of Graton, with 17-year old vines. Quite floral on the nose, along with citrus and stone fruit, vibrant acidity plus medium body and a long, fresh finish. 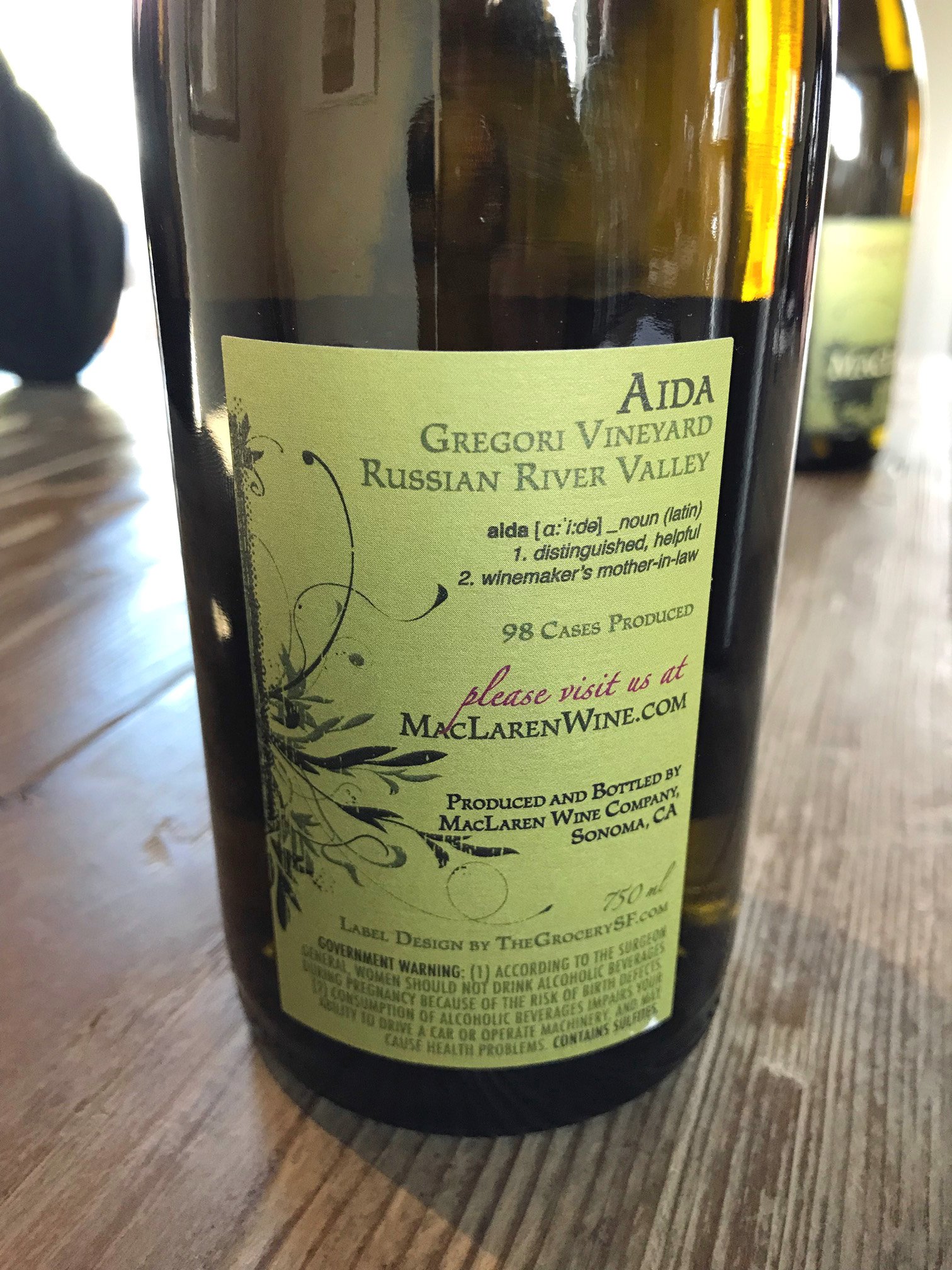 We moved on to reds, and Steve poured three Syrahs, with vineyard sources in order from the least to the most sun on the vines. All but one of the MacLaren Syrahs are single-vineyard designates, and there’s a considerable variance in pick dates at different vineyards. The 2016 Atoosa’s Vineyard Syrah, from a site west of Santa Rosa in Russian River Valley, is always the last fruit picked. This featured floral and dark berry fruit aromas, with notes of spice, white pepper, and smoked meat, medium weight with a lively mouthfeel and fine tannins – already approachable but a good candidate for some time in the cellar too. Steve said that the vineyard has changed hands and that the name may change but that he expects that he’ll still be able to get fruit from there. He thinks of this wine as his “fish Syrah” since it can work with salmon and similar fish.

Steve next poured for us the 2016 Samantha’s Vineyard Syrah – the steep hillside vineyard was planted around 2000 and is located on Limerick Lane in northern Russian River Valley. Steve noted that he typically picks the fruit here 3-4 weeks earlier than at Atoosa’s Vineyard. Unfortunately 2017 will be the last vintage, as the vines have developed red blotch virus. The wine was peppery and floral, with blackberry, spice, and earth, a fuller texture on the palate than the Atoosa’s bottling with more grip on the finish. We tasted one more Syrah, the 2016 Moaveni Vineyard Syrah from Bennett Valley. Planted to the 470 clone of Syrah on a steep slope, the site is somewhat warmer than the others and it’s in more of a “California style” than first two Syrahs. This wine did indeed display more upfront ripe dark berry fruit with a bigger spice component, plus hints of pepper and herbs, a rounder mouthfeel with fine acidity and moderate tannins. 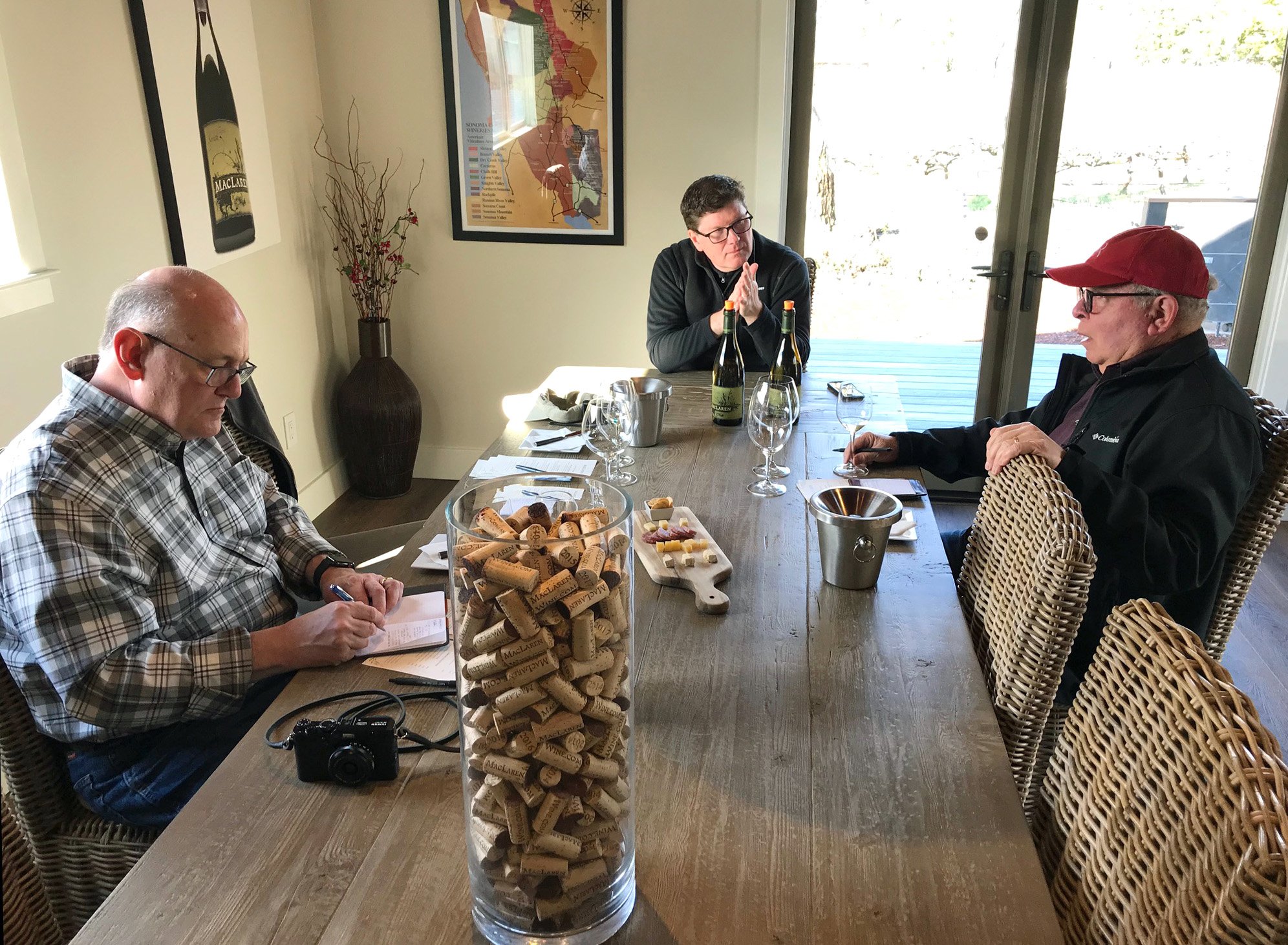 Our final MacLaren wine was the 2016 “Heather” Pinot Noir, named for Steve’s wife and inspired by the wines of Côte de Beaune. Sourced from Steiner Ranch in southern Bennett Valley, this includes Pommard, 115, and 667 Pinot clones. Showing black cherry and red fruit, flowers, spice, tea leaf, and earth aromas, this had a lovely silky texture and finish.

I mentioned that there is one MacLaren Syrah that’s not from a single vineyard, the “Drouthy Neebors” Syrah – the name means “thirsty neighbors” in the old Scots language. This is a barrel selection, with wine club members helping to choose the blend, and it’s available to wine club members only. In addition to that one, other wines we didn’t taste on this visit include “Kenzie” Rosé and Timbervine Ranch Syrah. Steve told us that he’s no longer getting the Timbervine Ranch fruit but is now getting Syrah from Greywacke Vineyard in the western Russian River Valley.

As we finished our tasting with Steve, he pointed out the small vineyard, only 1/2 acre in size, that’s adjacent to the cottage and house. Named Boar’s Rock, the vineyard has dry-farmed Sangiovese vines that were planted in 1993, and Steve harvested about 3/4 ton last fall. He doesn’t think he wants to continue growing Sangiovese there, though, and the vines may be grafted to Viognier.

Our visit with Steve at the MacLaren Cottage was one of the highlights of our Sonoma and Napa wine tour. Steve is always a pleasure to taste with – he’s serious about his wines yet has a delightful sense of humor. Steve’s Syrahs remain at the heart of the MacLaren wine line-up, while his more recent non-Syrah wines were outstanding as well. Cool-climate fruit really defines all of these wines, and they show that you don’t need super-ripe fruit (or lots of new oak) to make delicious wines in California. The wines all had terrific acidity and will be very food-friendly, and the different Syrah bottlings showed great distinctiveness between the vineyards. These are already approachable yet should develop nicely with additional bottle age. All of the wines were excellent, and particular favorites included the 2018 “Aida” Viognier, * 2016 Atoosa’s Vineyard Syrah, 2016 Samantha’s Vineyard Syrah, and 2016 “Heather” Pinot Noir. An appointment to taste with Steve at the MacLaren Cottage is highly recommended. 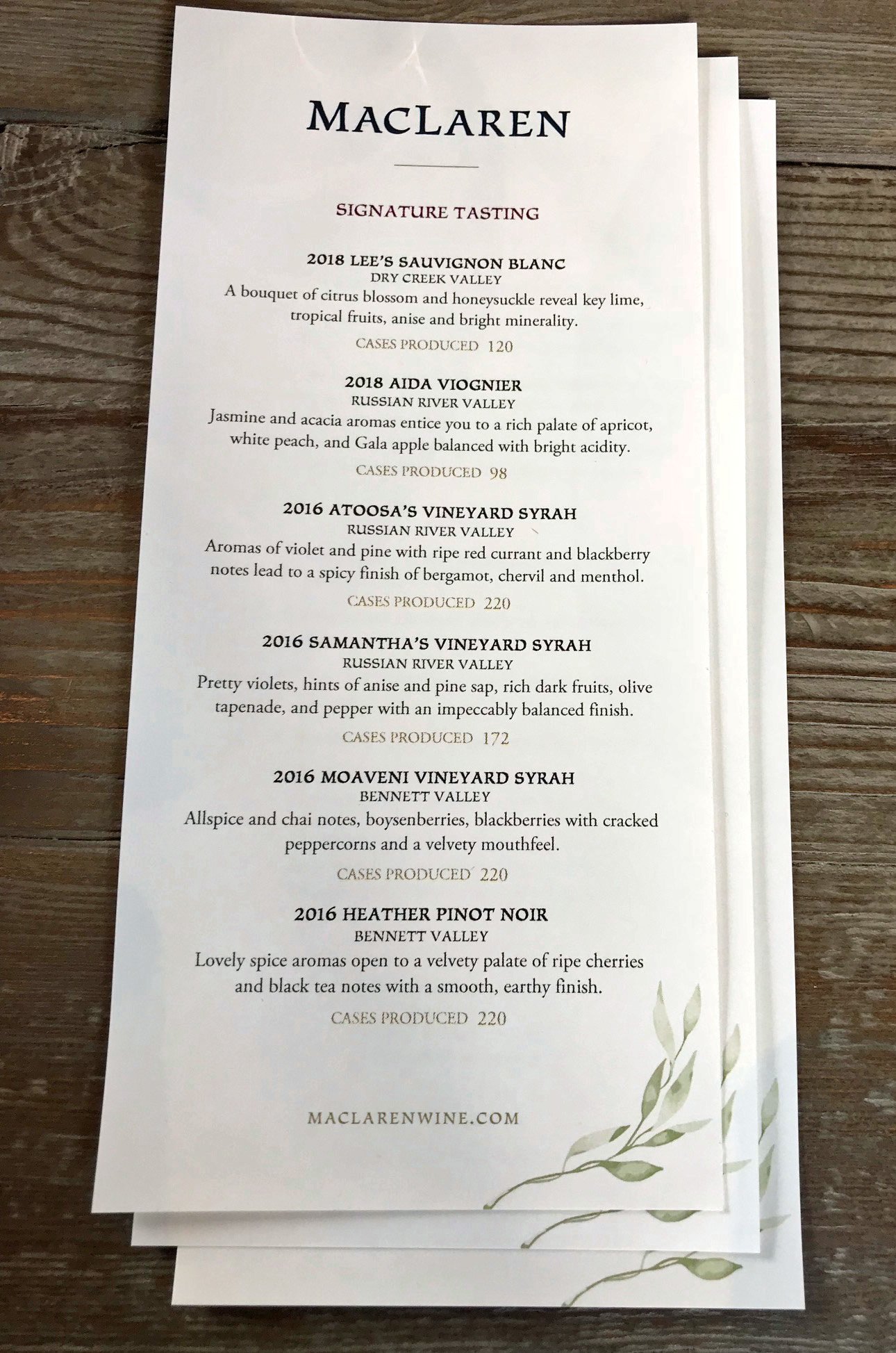