It's in Georgia (nation not state) - what is it? 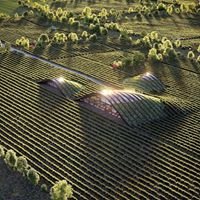 Alien spaceship peeping out of the ground.

Sally saw this in a design magazine she follows on-line. All it said was ‘winery in Georgia’. I assume nation, not state, looks interesting. The comment by YLee (is your last name Coyote?) looks like it could be accurate, but almost certainly is not. I’m infinitely curious about wine and hope somebody can come up with some details.

FWIW, I’ve had a dozen Georgian wines, found many of them interesting and good, but I don’t think they have gotten any traction in the U.S. market.

I was in Tbilisi last week. There are many excellent wines available and for very little locally.

A store called 8000 vintages says they ship internationally but I didn’t ask about logistics. Huge range and very knowledgable staff.

Many thanks to Wes Barton

Our family enjoys art, far more looking than buying. We have two general categories that make for interesting discussions:

I’m inclined to think that this winery falls into the first category. If I had a little more spare time and spare change, I’d hop a flight to Tbilisi. I would love to see this (assuming it’s not photoshopped) and taste the wines. My hat is off to whoever dreamed it up.

Wow, there is a lot of money behind that operation. It apparently was established in 2015 and the winery looks quite modern.

I wonder if they actually made it. Google search the producer and only architect style photos seem to come up.

In various places on the web (including their own website) you can see Shilda Winery’s building. It’s shiny and new, but rather mundane.

Yes I can’t reconcile those with the photo above.

Most of Georgian wine depends on sales in/to Russia. One can imagine that investing so much and then have both governments in political wars won’t do much for business. Latest Georgian government seems to be trying to patch up the differences, and if that happens, then this winery may be able to succeed. Otherwise, money pissed against the wind.

Also, not sure what all the fuss is about their wines with most wines produced there having heavy doses of RS and little acidity to speak of. Works for Georgia, of course, with their cuisine on the spicy side, but in the rest of the world those heavily singular prunish notes don’t do much.

Every time I see positive reviews on these wines my only question is, Just how much Georgian wine are YOU buying for your own consumption? Outside of some Russian delis across the US I have no idea who buys this crap, nor know of anyone who does, pretty much anything low end Beringer/Gallo is better, and at much better price. And Bogle absolutely destroys anything out of Georgia, at half the price, as one example, a ton of others. And even at Russian delis they mostly collect dust (though interesting to see Bulgarian wines now making a push, it seems, to compete for same shelf space).

A little over 60% of Georgian wine exports go to Russia. That’s down from over 90% before 2006 (2006 embargo, 2008 war, embargo lifted in 2013, I think). China has been a growing export market (it’s third after Ukraine), but I think that is mainly for very cheap wine (couple dollars a bottle stuff) and is very price sensitive.

Some Georgian wineries appear to be trying to improve farming and wine making, but I suspect it’s still a minority of them. Those few may be able to find export markets outside Russia, Ukraine, China provided they get away from the “Stalin’s favorite wine” semi-sweet reds and expand beyond the somewhat of a crap-shoot qvevri wines (there is a market for these but I think it isn’t large).

I had a few Rkatsiteli (sp?) going way back, thought it was a worthwhile white grape. More recently I remember trying a Saperavi red; I didn’t find it worth posting on but remember that it was a pleasant, solid, good dry (not remotely sweet) red wine that was faintly reminiscent of Zinfandel. Not Ready for Prime Time, but not bad and the history is there.

FWIW, about 10 years ago (soon after the Russian war), I was invited on an all-expense paid trip to Georgia’s wine regions. The person doing the inviting made no secret of it or bones about it: The trip was (one way or another) being paid for by the U.S. government in an effort to help Georgia’s economy. While I sympathized with Georgia, I didn’t accept the trip. The samples I was sent were 50% semi to fully sweet wines. The other 6 were just OK; the Saperavi I tried within the last few years was better.

Does anybody know if the vineyard and winery in my OP is real, or just an architect’s / artist’s conception?

Some Mukuzanis are the only ones I found to be OK, and just OK, they are some of the dry reds made there. Again, between those and, say, Bogle, there is really no choice.

Latest I hear is that Georgia buys up lots of bulk juice in Moldova and then bottles it as their own grown wine. Acreage planted in Georgia does not support their claim of X millions of bottles. Works for cheap exports to Russian markets, and maybe China, but won’t hold a candle to that same 2BC here, to be clear. Most wine in Russia sells for $3-6 per, people simply have no money to buy the good stuff, $15 bottles are considered “luxury” for every day consumers there. When average salary is 10-15000 rubles a bottle for 1000 is way too much for them. Elite, of course, drinks differently, in true socialist fashion.

Been sampling this stuff for over 35 years now, still have no idea what wine reviewers see in them beyond being a “novelty”. Same way I regard Armenian “cognac” as nothing more than bottled DDT.

Last I heard, Russia was no longer a socialist country. Is there a news flash? Have I missed something? Inquiring minds want to know!

The Georgian Saperavi wines I’ve tried have all been dry, but also a bit underwhelming, a bit on the hard side without the material to support further development. The best dry reds I’ve tried were a couple of Mukhuzani reds back in the 1990s at a somewhat connected restaurant in Moscow called Aragvi (closed a few years later, apparently recently reopened). Greg is right that counterfeit wines and brandies (called konyak) is a big problem. I’ve had more luck with whites, mostly selected orange wines and medium priced, non-skin fermented quaffers.

It is interesting that is near where Vitis vinifera was first domesticated. Botany of Desire’s chapter on apples and Kazakhstan makes me wonder if somewhere in Georgia is the same for grapes?
https://en.wikipedia.org/wiki/Vitis_vinifera

Changes in pip (seed) shape (narrower in domesticated forms) and distribution point to domestication occurring about 3500–3000 BC, in southwest Asia, South Caucasus (Armenia and Georgia), or the Western Black Sea shore region (Romania and Bulgaria).

The earliest evidence of domesticated grapes has been found at Gadachrili Gora, near the village of Imiri, Marneuli Municipality, in southeastern Republic of Georgia; carbon-dating points to the date of about 6000 BC.