Hi everyone. I’m not sure why it took so long for me to discover this forum but I’m very glad I did.

We finished our basement 3 years ago and I added a 900 cubic foot, 750 bottle cellar that, up until recently, did not have a dedicated cooling system. The cellar sits nicely in the corner of the basement with foundation walls on two sides, a full bath on the other side and, 4’ of wall dividing the cellar from the mechanical room where I had intended to install a through-the-wall system at some point in the future. The foundation walls have 1" of rigid foam insulation plus R-15 batt insulation between the studs for a total of R-15 (R-30 in the ceiling). The floor is laminate with a thin foam backing which I laid on 1/4 rigid insulation over the concrete floor.

I know that standard practice is to put the vapor barrier on the warm side, however, I put the kraft side of the batt insulation on the cellar side for two reasons. First the temperature differential would only be 15 degrees max and, second, I preferred the humidity to not penetrate the insulation which would just increase the demand on the humidifier. I also put 2 coats of latex over a primer coat which also acts as a vapor barrier (to an extent).

I was lucky to find a brand new Wine Guardian DS-025 (evaporator unit only) on eBay including the thermostat/controller just 60 miles from us. He must have had it listed for some time since my $500 offer was accepted within minutes. I then contacted the local WG dealer who quoted me $3,230 for the matching compressor and $895 for the humidifier (plus another $195 in shipping costs). Considering a complete system currently lists for $6,220 (without the humidifier), I figured I was already ahead $2,300, and, for this reason I went ahead and ordered the humidifier (which turned out to be a necessity as I’ll explain in a bit).

Not knowing the installation costs, I began calling a few commercial refrigeration companies and learned that a properly sized compressor and a few other components would afford me some additional savings over the “matching” unit from WG. Since our insulated garage was directly above the mechanical room, I had wanted to locate the compressor there, however, the installer I went with advised it would be best to locate the compressor in the mechanical room where it would run more efficiently in the summer and eliminate the need for a crankcase heater in the winter (I was surprised to learn that the heater would run anytime the ambient temp dropped below 55 degrees).

I ran a dedicated 120V/20A circuit to the area and installed 2 shelves to support the evaporator unit and condensing unit and ran a duct to the opposite side of the cellar. The compressor and other system components were installed, the unit was charged, started and checked for $3,500 (so $5,100 all-in including tax).

I hadn’t decided where to drain the unit so the installer said to use a bucket until I had it figured out. To my surprise, the amount of condensation plus the runoff from the humidifier filled a 5 gallon bucket within a few hours. From the day the unit was installed in April, I set it to maintain a temperature of 56 degrees at 50% RH and ran it at those settings until just a few weeks ago when I noticed that the compressor, which had been cycling for approximately 40 minutes 12 times per day, was cycling 14-16 times per day (the basement is a walkout so the temp does fluctuate in the summer). I had previously hung one of those indoor/outdoor weather stations outside the cellar door with the sensor inside the cellar and noticed that, with the WG thermostat set at 50% RH, the sensor was measuring 60% (the temperature readings agreed). I then grabbed my humidor sensor and it came in slightly lower at 58%.

So long story short, I increased the cellar temp to 57 degrees with a RH of 46% and now both sensors have me at 55% (+/- 1). With most of our reds being 2010-2016 Riojas & Dueros, I’m not worried about being 2 degrees over the “optimum” temp. Better yet, even as the basement sits at 75 degrees these days, the compressor is back to cycling 12 times per day (which makes sense now that the cooling unit isn’t wasting energy removing excess water vapor from the cellar).

In hindsight, I wish I had gone with a simple, through-the-wall unit, especially when the compressor ended up in the mechanical room. The installer said that the compressor would be as loud as a microwave, and, it more or less is, however, the tone is not pleasant and, therefore, I ended up having to sound proof around the compressor which only helped some. I also keep the door to the mechanical room open when we’re not in the basement so that the heat does not build up in the same room as the HVAC unit. It will be interesting to see how often the compressor cycles in the winter as the cellar would drop to 55 degrees in January on its own.

That’s my story. For those with cooling units (split or otherwise), I’m curious how often your units cycle/run during a 24 hour period and your temp and humidity settings. Otherwise, let me know if anyone has any questions!

Your cellar looks great. Where did you get your racking from?

Chad, welcome to the board!

I have a Wine Guardian D025. It’s downstairs in my mechanical room so I’m not sure how often it runs, but seems like several times a day in the summer for maybe an hour or so at a time. Mine is hung from the ceiling and I also had to soundproof the ceiling above it, as it’s quite loud and was echoing up through my main level engineered wood floor. The soundproofing actually worked very well, now I can’t really distinguish it from the sound of the whole house HVAC system, which is just a light background hum.

I’m curious about your decision not to install a true vapor barrier given that everything I have read on the subject indicates it’s essentially mandatory if running a separate cooling unit. I don’t think the issue is humid cellar air creeping out as much as it is the difference in air temperatures creating the potential for condensation, which in the case of no vapor barrier (or vapor barrier on the interior of the cellar) will end up in the insulation and could cause mold issues. I’m by no means an expert on thermodynamics or cellar construction, but the literature online seems pretty consistent on that point.

BTW, would love to see a cellar pic but your Dropbox link is blocked from my computer. Can you pick a highlight and post to the thread?

Converted the photos to generic file types and attached them here… Hopefully that solves the problem.

On the first question, I was fortunate to pick those up on craiglist (Chicago) about 5 years ago for around $500 if memory serves. There isn’t any branding anywhere so I think they may have been custom made. It also appears I can add a 2nd tier, however, I’m having a hard time as it is keeping it half full as it is!

As for the vapor barrier, if you can see the photo of the cellar, the wall on the right hand side and the back wall are both butted up against the foundation walls where, again, I have an inch of rigid insulation that does act as a vapor barrier. I also realize that kraft paper is not technically a vapor barrier so I do regret not going with plastic sheeting for the left wall and ceiling. I guarantee I’m loosing much more moisture via the evaporator than through the walls in any case. The 4’ section of wall between the cellar and mechanical room is not mudded so I could open that up at some time in the future to see if there are any issue, however, I won’t loose any sleep over it.

On the cycle frequency, I have a z-wave multi-sensor in the cellar also just so I can monitor things remotely, however, I know that this sensor is not accurate as it’s mounted near the ceiling. I can check the history and see the dips and peaks in the temp so I can count the number of times it cycles which is an unintended benefit. Keep the questions coming! 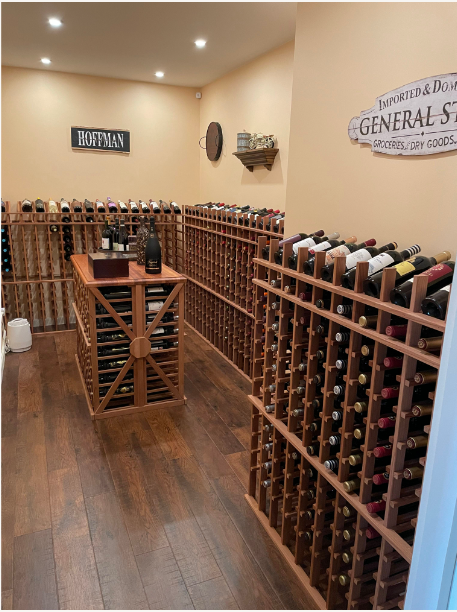 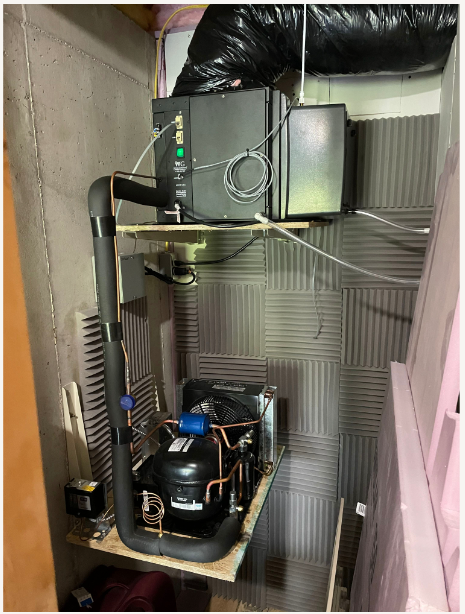