For the first time last year, we held a Friday AM golf outing as a prelude to Falltacular weekend. We saw it as a way to get some people together to have some fun on Friday AM, then relax a little before we headed over to the Friday night Pre-Falltac BYOB dinner. We had 2 4-somes last year, and we ended up coming back to my house for some wine and laughs in the afternoon before we all headed over to Brick for the Pre-Falltac dinner. All in, I thought the day on Friday went smashing good.

So, for anyone who may want to join us for some Friday AM, 2/20 golf, please post below. Last year, I pitched the idea of Monarch Beach, where I have some discount green fee privileges (http://www.monarchbeachgolf.com/index.php) but we ended up playing up the way at San Juan Hills (http://www.sanjuanhillsgolf.com/). If you have interest in playing, take a look at the 2 courses and then post the course name if you have a preference.

If you decide to come out and play a round with us, we’d tee off around 830AM. In addition, you do not have to attend the big BYOB dinner on Friday night, nor Falltacular itself if you elect to play the round, but we of course encourage everyone to do as much over the 2 days as they can rally for!

Look forward to your replies.

Interested in this as well. Should be able to firm up plans in the next couple weeks.

Heck, with only 3 of us, we’ll play Monarch instead! Keep posting if you will want to play golf. Once I know the #, I can settle on which course is best for our group. PS–the photo below is the 3rd hole at Monarch 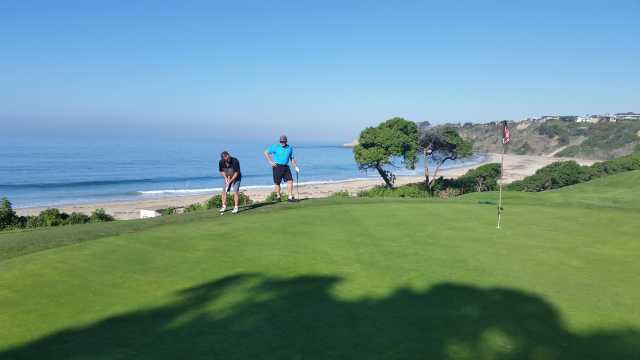 Brig and Mike Potenza are in

I’d vote Monarch, Frank. Haven’t had a chance to play Monarch in ages, and San Juan is what it is.

I’d vote Monarch, Frank. Haven’t had a chance to play Monarch in ages, and San Juan is what it is.

My membership gets me the member rate for the entire foursome, but only one foursome. I will call Monarch and see if they will squeak us in for two, not sure if they will make an exception or not. If not, then we can try Tijeras or San Juan.

Keep posting interest, guys. And Silk, good to see you coming down for the event, and playing. Excellent.

Ever played Arroyo Trabuco Frank? This is located at the end of Avery, only a mile from the I-5 exit. Might make for a nice convenient plan B. A better course/design than San Juan and maybe a tick cheaper. They also have a legit restaurant that was Wine Spectator rated, FWTW. A hidden South County gem.

Ever played Arroyo Trabuco Frank? This is located at the end of Avery, only a mile from the I-5 exit. Might make for a nice convenient plan B. A better course/design than San Juan and maybe a tick cheaper. They also have a legit restaurant that was Wine Spectator rated, FWTW. A hidden South County gem.

Traveling like mad, but, count me in. Will also add my name to the dinner on the 20th, Falltacular, etc.

I might be in too this time, 'long as I can borrow some rented clubs…also have to figure out whether I’m coming right down to stay local on the Thursday night or staying in LA area that night instead—discussions are ongoing with Marshall and Diana, among others, about that…

Sweater Man, don’t worry about the count. It will surely change, up or down, so just figure out if you want to swing them with us and then we can go from there, buddy.

Hi Frank! I’m doing my annual “see what’s up on WineBerserkers” lurk and just realized that it’s that time of year (the name confuses for those of us that aren’t major WB aficionados). I’d love to play again this year. If I can make it to Falltacular I’ll let you know. You know I’m good for the $$

Hi everyone. This Friday, the window to book San Juan for our game on 2/20 will open. I need to know who is coming down to play golf so please do me the kindness of confirming your attendance for the game.

Robert, thanks for making the suggestion. Brig and I have played Arroyo together a few times, I do like the course. However, I am tied in pretty well with San Juan and Monarch, and I would rather see us land there.

Gang, the rates would be…

$69–San Juan
$109–Monarch (based on how many of you want to play, I will talk to them to ensure this rate will stick)

Regardless of where we end up playing, we’ll be teeing off around 845 as that seems to work best for getting us done early enough to relax, come back here for some wine at the house and get ready for the Friday dinner.

Please consider me as confirmed. My vote is for Monarch.

Still in, big vote for Monarch!