Met up with a couple of (mostly) Berserker friends last week; we were glad to squeeze in a wine dinner before the holidays. Every bottle showed really well, including a couple more that I completely failed to take notes for (owing to being excessively tipsy). So grateful for everyone’s generosity (and foresight, in the case of those who started collecting before I was of legal drinking age)

2008 Gimonnet Extra Brut 'Oenophile’
Piercing, laser-like citrus fruit coupled to a distinctly salty/stony palate; despite the intensity, this never comes off as harsh or shrill; a really satisfying drink, and one that makes me want to cellar more Gimonnet; good plus

MV Andre Clouet Cuvee 1911
Blend of '04, '05 and '06 disgorged in 2011 and finished in Sauternes barrels; showing rich and even a touch nutty, the Sauternes character coming through; thins out a bit more than I would like towards the finish but very drinkable - I wonder if this would put on a little more weight with age; decent plus

2000 Clos Rougeard Saumur-Champigny
An ethereal, beguiling scent - leafy and complex - then light bodied and wispy on the palate; the very embodiment of finesse and delicacy; somewhat overwhelmed by the heavy food (venison and a mushroom cream sauce) and some of the companion wines, but worked really well as an aperitif; really feels like it has transcended the corporeal world and could live forever just developing finer and finer complexities; good plus

1995 Clos Rougeard Saumur-Champigny 'Les Poyeux’
Apparently this was bought & shipped from Switzerland for $36 (!!) many years ago; it marries the same leafy signature of the 2000 to a larger, more substantial frame that shows real drive and palate staining minerality; reveals new facets and complexities with the food; you can see the family resemblance between the two wines, but they are such utterly different expressions - this one earthbound and brash whereas the other is aerial and ethereal; very good minus

1982 Carmenet Sonoma Cabernet Sauvignon
Made before Parker got his hooks into the region; crystalline red both in appearance and taste; nicely persistent on the palate with bright tertiary fruit embedded in a fine mineral structure; not the last word in complexity but very well preserved; good

2016 Thierry-Allemand Cornas 'Chaillot’
A robust, highly accessible expression of the Allemand signature, which I think of as violety purpley dark fruit, with none of the overt grapiness one might expect from a wine this young; already showing a little secondary nuance; thick, plush texture with unobtrusive powdery tannins; there’s a depth to this that promises many good things in the future; good plus with upside

1999 Vieux Telegraphe Châteauneuf-du-Pape 'La Crau’
A most uncanny nose of sweet strawberries and cream, like we’re sitting down to high tea, and then an actual note of tea peeks out to complete the effect; the overall impression is this dangerously tempting confectionary sweetness that never quite tips over into being cloying; as with the 2000 Clos Rougeard this seems another wine to drink on its own, although for very different reasons; good

1996 Domaine Huet Vouvray Moelleux Premier Trie 'Le Haut-Lieu’
Lots of fruit with a touch of tertiary (coffee, apricot, papaya); nice raciness to it; not a major fan of Chenin but this is very enjoyable and a great way to end the dinner; good minus 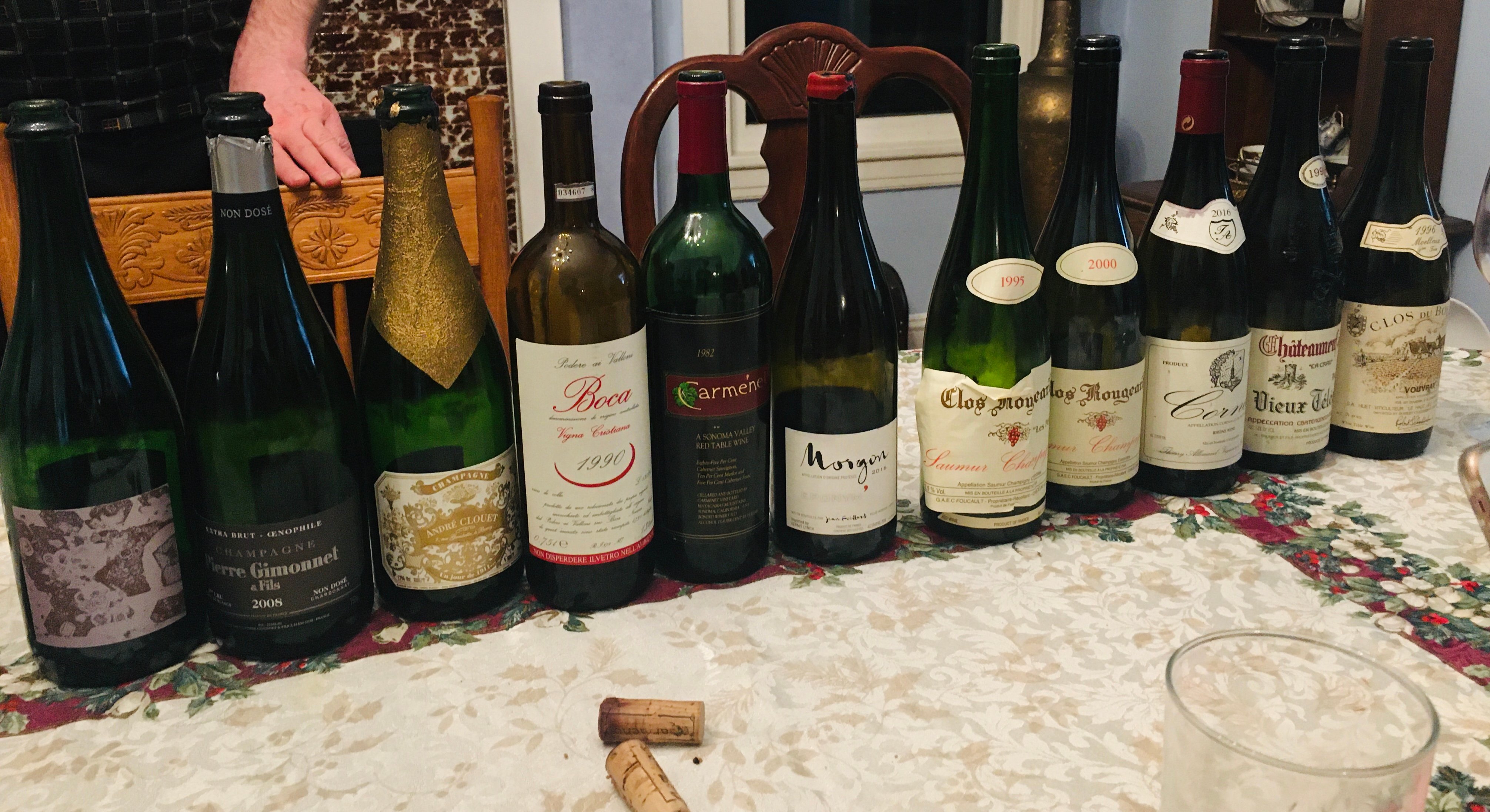 I thought Carmenet was founded in 1983, at least as per web site. If so, an interesting anomaly.

I thought Carmenet was founded in 1983

Hm, I have absolutely no idea but the bottle does say 1982 and I doubt anyone would want to fake it

I’ve had 3 bottles of the '95 Rougeard Les Poyeux over the last 7 years, a surprise gift from my wife which she carried back from Paris about 10 years ago for about 2X the $36 cost of your bottle, and they were short of phenomenal.

Also had the 2000 Les Poyeux that was good but did not measure up to the 95s.

I’ve had the 95 Poyeaux 4 times now in the last 6-7 years. The earliest one of those, the wine was tannic and tight. You could see where it was going, but it needed more time. The bottle that was probably 4 years ago was just starting to turn the corner. The bottle 2 years ago was just fantastic – notably more expressive on the nose than this bottle was. I think it was just bottle variation – I will be in no hurry to drink up my remaining bottles.

And I liked the Huet better than you seem to have. It was just perfect with your very fine pear tart.

Other wines included:1990 ai Vailloni Boca Vigna Cristiana, 2016 Foillard Morgon Eponym, 2015 (?) Evening Land Blanc des Blancs. My notes for the Boca are much in line with Marc Hanes’ here, except that I didn’t notice any obtrusive heat. The remains of the Foillard were much improved the next day.

That 99 VT has been delicious at every stage of its life. I went through my bottles much faster than I normally would because it was so attractive when the 1995, 1998 and 2000 were grumpy.

Never knew the 1911 was finished in Sauternes barrels, interesting.

Lee (or others) would you say the Bourg is worth seeking out? This experience makes me want to find some but of course the tariff is a bit higher these days…

I checked my other photos and it’s indeed the 1999

Lee- We should do a Rougeard vertical sometime.