Our monthly blind tasting group met at one of our member`s home to enjoy another stellar night of fellowship and learning how to be humble and realize there’s much to learn by sampling wines blind.

That is especially true for wines that we may be familiar with or have decided is our stylistic preference when in fact, we’re influenced by what someone else has said or rated the wine to be, how much the wine costs, the prestige of the producer or vineyard or even an appellation, region or country.

So, when I go to these tastings that have been held since 1989, one of my objectives is to identify the wine I take {assuming its one I’ve had previously}. On a few occasions, I nail it; on most, I’m at a loss and have no clue. AND, in most cases, I learn about the wines we taste and am able to make a more informed buying decision about wines that please my palate.

Our theme on this night, as determined by our host member, was Rhone reds. Obviously, this is a pretty broad range of wines and as it turned out, we had 6 from Northern Rhone and 6 from Southern Rhone which translated into doing 2 flights of 6 after 3 white starter wines and amongst some nice appetizers.

Each person makes notes and scores each wine and assigns a ranking. We then collect the rankings, tabulate and vote. After brief discussion, we unveil each brown bagged wine in the order of the group`s preference.

2001 CHATEAU LA NERTHE CHATEAUNEUF-du-PAPE- it had a surprisingly youthful purple color given the vintage; the nose was very inviting with mild spicy fruit which on the palate turns out to be plum, blackberry and blueberry with an underlying streak of spice; it had a silky smooth texture and finished with the same mellow taste profile that was suggested in the aromatics; my fav of the flight; the group had it tied with the next wine for 1st. 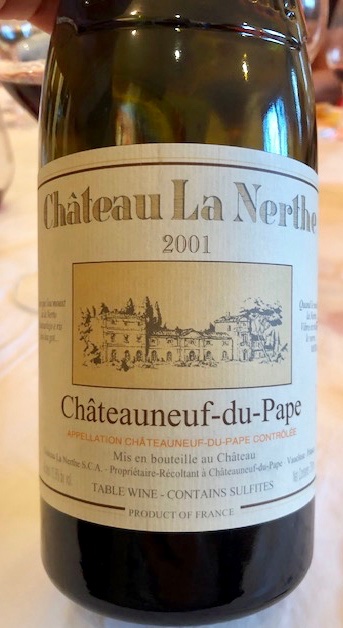 2007 ANDRE ANDRIEUX GIGONDAS- a Grenache and Syrah blend; youthful purple color; the nose had mild expressions of spicy red fruit as did the taste profile with red cherry and raspberry; its just a really pleasant wine, easy on the palate and enhanced by its soft mouthfeel; my #2 in the flight. 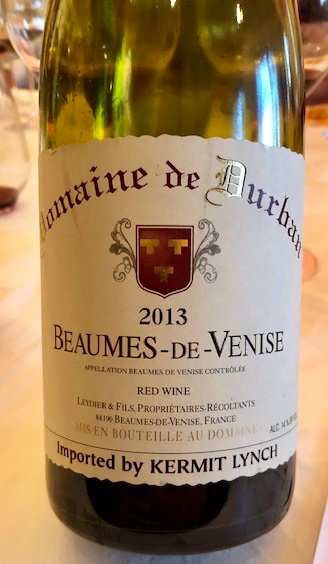 2007 FERAUD-BRUNEL COTES du RHONE VILLAGES RASTEAUX- Grenache blend; this wine comes from a collaborative effort by Laurence Féraud {Pegau} and André Brunel {Les Cailloux} of Châteauneuf-du- Pape; the color suggested a relatively young wine; the nose had very mild aromas of raspberry and cherry/ berry which continued on with a hint of oak influence; it was more fruit forward, easy and simply pleasant. 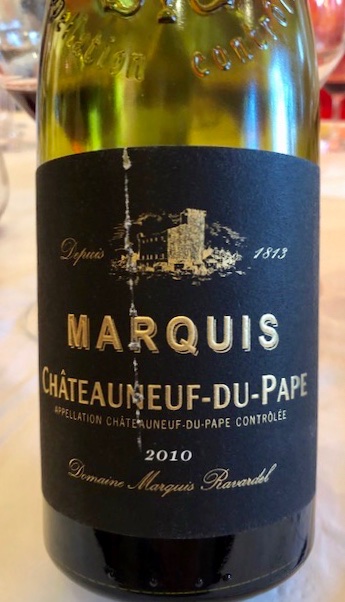 2000 BEAUCASTEL CHATEAUNEUF-du-PAPE- the nose had some funk that did not blow off, in fact, it got worse with time and I almost didn’t venture on, but eventually decided to give it a taste and was sorry I did; briary wild and wooly dark fruit was the only highlight as this bottle was a poor representation especially once it was recognized as coming from Beaucastel.

2010 DOMAINE MARQUIS RAVARDEL CHATEAUNEUF-du-PAPE- Grenache blend; I got a mild hit of Brett in the nose which did not dissipate; there was also some earthy, leather character to the dried out red fruit; a slight hint of pepper joined in and the wine finished very dry at the end. 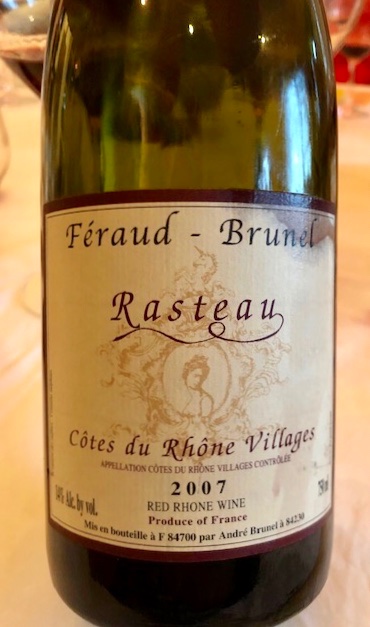 2013 DOMAINE de DURBAN BEAUME-de-VENISE- 70% Grenache, 25% Syrah, 5% Mourvèdre; from a producer who is best known for quality Muscat wines, this youthful rouge first gave off a perfume of sweet cranberry and cherry that continued on and finished on an upbeat with nice red and black cherry fruit most prevalent. 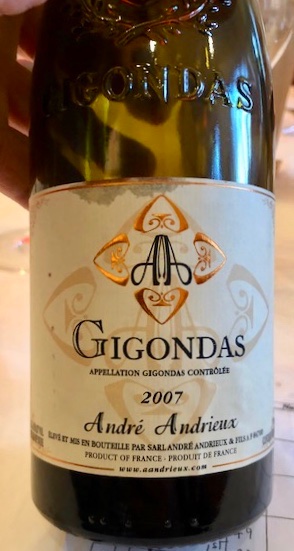 2003 PIERRE GAILLARD COTE ROZIER COTE-ROTIE- 100% Syrah; from a relatively new producer founded in 1985, this wine had youthful dark purple color and a nice inviting nose of chocolate, plum and blackberry; the taste had more of the same plus a touch of coconut, wood oak and blueberry; this was full bodied and very rich; the group scored it #1 in the flight and after writing these notes, I’m wondering why I had it #3 although I’m still good with my #! choice below. 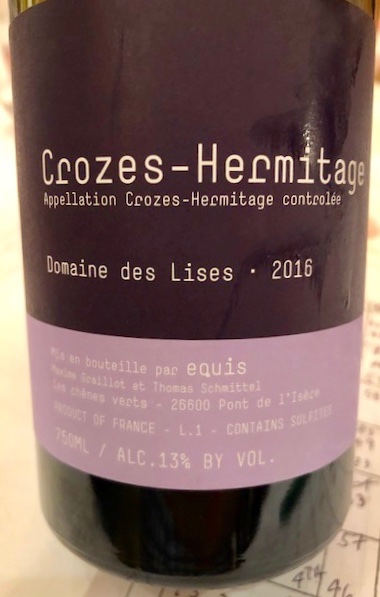 2016 DOMAINE des LISES EQUIS CROZE-HERMITAGE- youthful in color, the nose had some metallic notes and was really grapey; the taste profile was a much more pleasing chocolate and white pepper laced blackberry, plum and black raspberry; it had a really smooth texture, but finished a bit short; my #2. 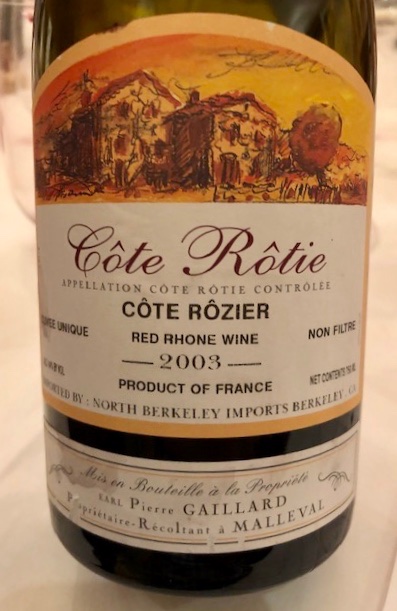 2016 FERRATON LA MATINIERE CROZE-HERMITGE- 100% Syrah; I didn’t doubt the % or inclusion of Syrah here as the aroma was full on bacon fat which continued on to join an unexpected taste profile of black currant, wild berry and tart olallieberry; it finished very flat and I downgraded it accordingly; the group scored it #2. 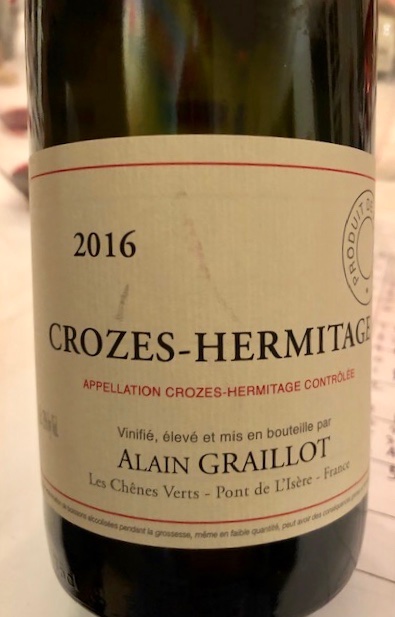 2005 E. GUIGAL BRUNE et BLONDE COTE-ROTIE- 96% Syrah, 4% Viognier; I recognized this wine as the one I brought as I’ve had it a few times over the last few years and picked up on its very distinctive spicy and peppery notes that were very prominent in the nose and in the taste and not found in any other N. Rhone to this point; it had perfect balance and great feel ending with a crescendoed finish; my easy choice for #1; the group had it #3 and I offered my glass for their dump bucket.

As an aside, I bought this from Envoyer along with a number of other older N. Rhones and inspected the label on the bottle to find it came from Ex-Cellars Wine Agencies which was owned by a dear friend who I share a fair amount of time with and who generously opens numerous gems from his cellar which includes rows and rows of high end Guigals. So, I’ve probably stood next to the bottle I had on this night years ago and now it has come around by way of another step. 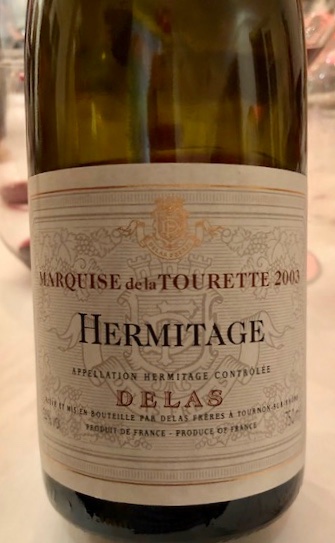 2003 DELAS MARQUIS de la TOURETTE HERMITAGE- this was the lightest of all in color and had lots of funk in the nose that did not dissipate and basically rendered the wine pretty much undrinkable.

2016 ALAN GRAILLOT LES CHENES VERTS CROZE-HERMITAGE- this had a deep, dark, vibrant purple color; I liked the nose with its pepper and dark fruit notes that on the palate included wild and ripe berry/ cherry with an underlying strange character that came in past mid palate and dominated the finish. 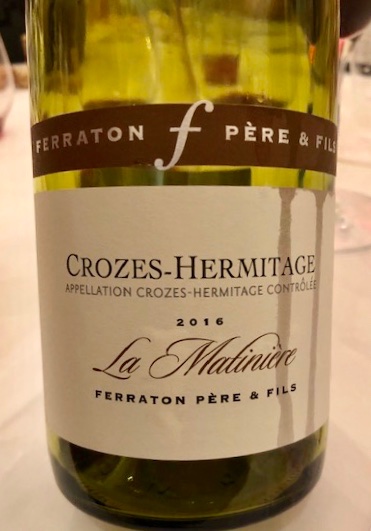 This blind tasting had all of the positive attributes of allowing us to identify characteristics in wines that appeal or do not appeal to us from an olfactory, tactile and taste sense standpoint and and therefore make more informed buying decisions. I certainly found a few wines that I will seek out as a result of this event. 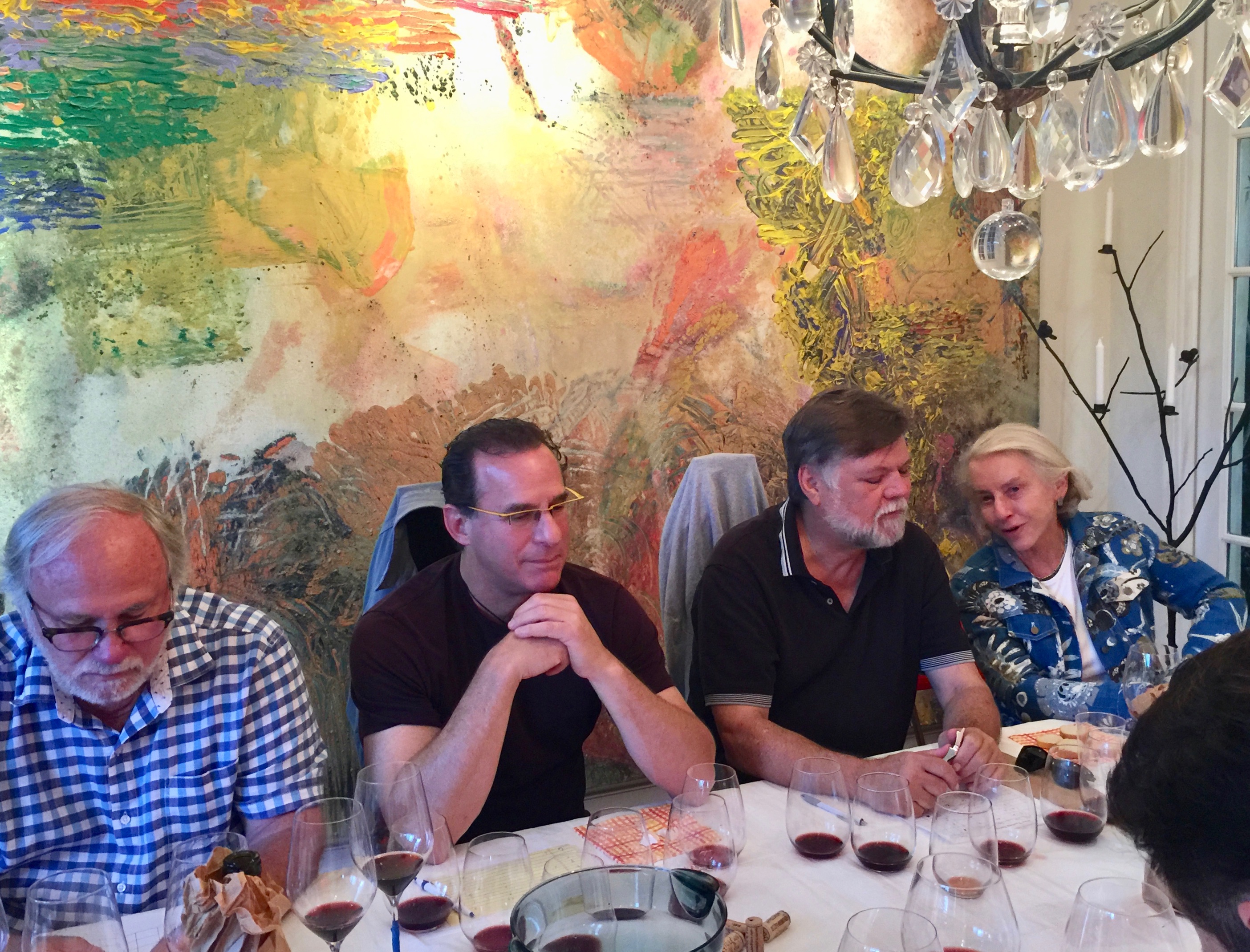 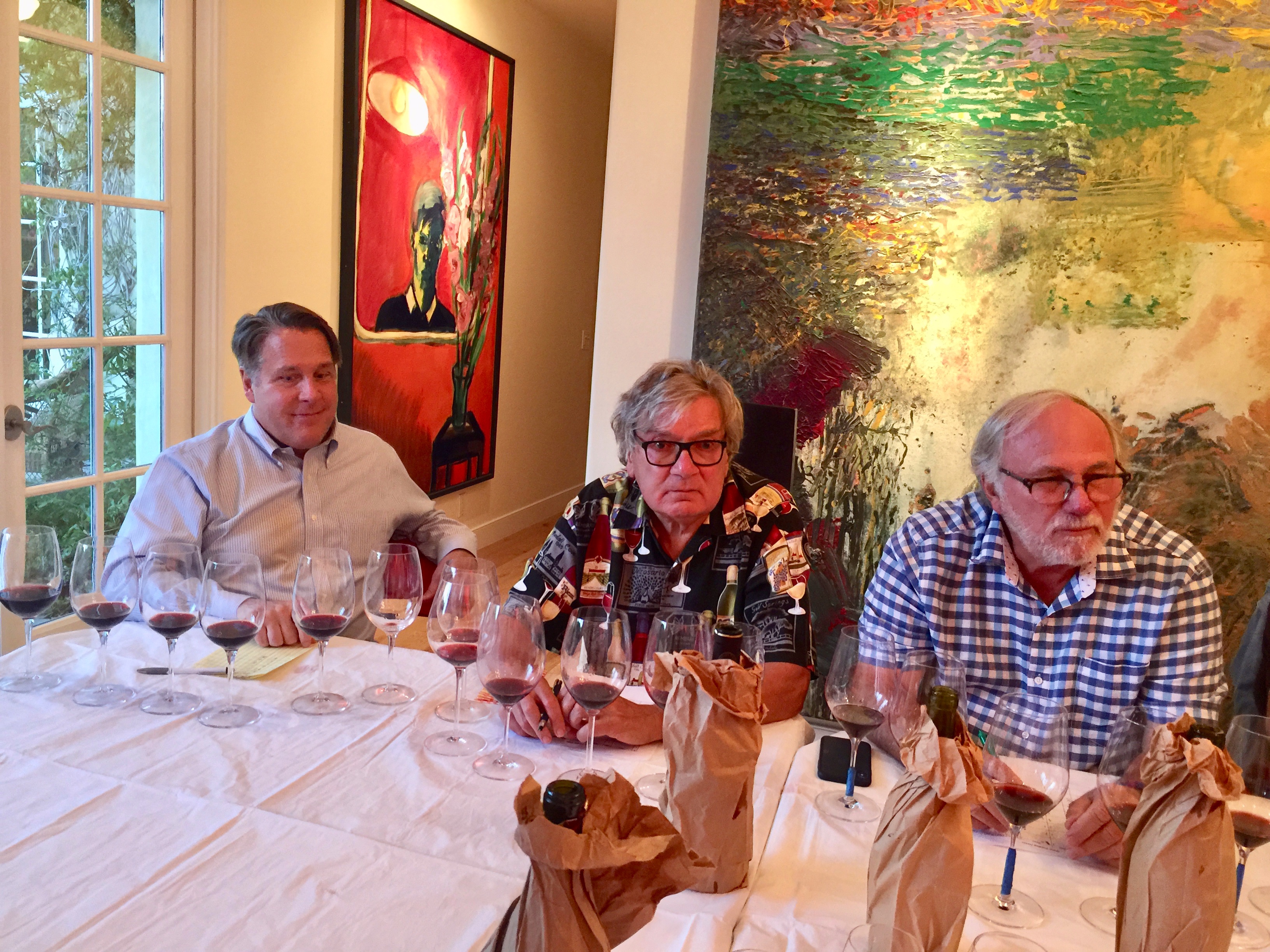 The other way round please: Laurence Féraud {Pegau} and André Brunel {Les Cailloux}

The other way round please: Laurence Féraud {Pegau} and André Brunel {Les Cailloux}

Dyslexic sentence- thanks for the correction.

Thanks for these notes!
Interesting about the 2000 Beaucastel. I’ve had it a number of times and it has always been Brett-free, the the point of me even nostalgic for a little touch.

Thanks for the notes, the Rhone is our favorite so it’s always nice to see how stuff progresses. It’s interesting, based solely on the descriptions in your notes I’d imagine my regular group would probably have the order of preference reversed from yours!

Thanks for the notes, the Rhone is our favorite so it’s always nice to see how stuff progresses. It’s interesting, based solely on the descriptions in your notes I’d imagine my regular group would probably have the order of preference reversed from yours!

I probably should not include the group voting as this group has quite the spread of palate preferences. Flawed wines have received top votes and wines that I call exceptional have placed last; so, it is what it is and I`d recommend disregarding the voting, even mine which is only MHO anyway.

Thanks for these notes!
Interesting about the 2000 Beaucastel. I’ve had it a number of times and it has always been Brett-free, the the point of me even nostalgic for a little touch.

As I said, this probably was a bottle variation as I`ve had plenty of this wine over the years and since the days of blatant Brett issues, have been well satisfied with all, pretty much vintage to vintage.

Great notes as always BB, but why does the beautiful lady have to sit in the corner, what gives?

Great notes as always BB, but why does the beautiful lady have to sit in the corner, what gives?

Her choice; usually she’s not bashful about sitting in the middle of the guys and we normally have 2-3 ladies.