A good friend put on his annual Christmas dinner in grand form this season. He has an immense amount of decorations with Santa being the main theme and every room in his home was arranged with an amazing display of an assortment of ornaments, figurines, settings, villages and yes, Santas. Even a Santa train is running around tis track with gifts and cheer being delivered to all who observe.

The appetizers were over the top and included a huge serving of caviar that I discovered after the fact of consumption. but I was drinking Cristal and didn’t have food on my mind. 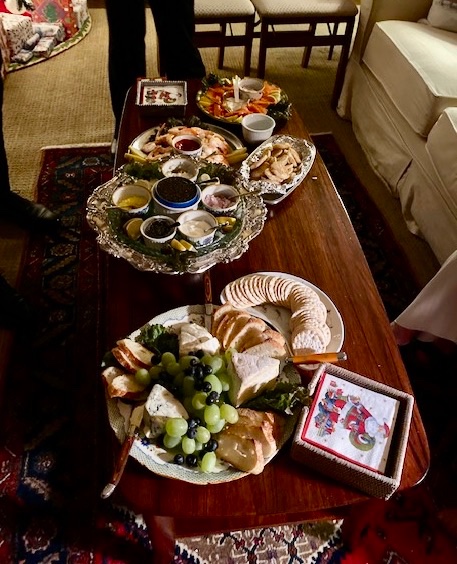 The sit down dinner for 14, mostly prepared by our skilled host, was also over the top and the table was magnificently set with the aforementioned Christmas decorations as well as the entire room. 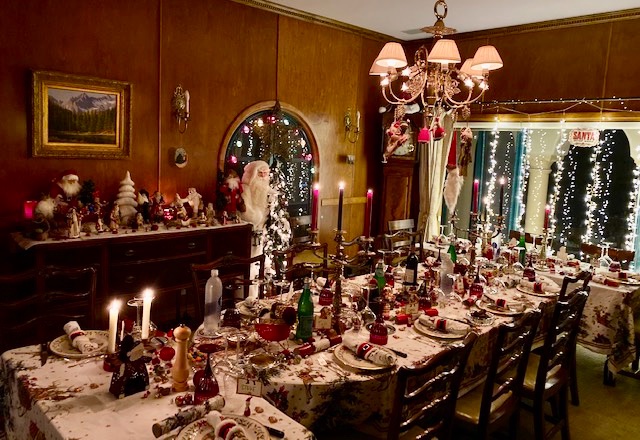 It was a wonderful environment and for me, brought back fond memories of childhood days with the family back in Kansas with snow on the ground, a crackling fire in the fireplace, way too many presents under the tree, Santa and his reindeer and sled on the roof and a traveling neighborhood choir Christmas caroling on the front lawn. The only thing missing in those early days was the Cristal.

Speaking of Cristal, on this night, we had 2 and some other nice bubbly and lots more. Here some notes in the order of tasting:

2007 LOUIS ROEDERER CRISTAL BRUT in magnum- 58% Pinot Noir, 42% Chardonnay; Cristal has replaced Krug and Salon as my go to bubbly for special occasions such as it’s Friday and since this was also my birthday and Friday, it was an easy selection; I’ve had lots of the 09 and too many of the 08 which needs lots of time, so i was interested in seeing where this was even though in a large format; regardless of anything else, it was phenomenal; the color was a faded yellow and the nose had very inviting aromas of fresh flowers, citrus and green apple; a strong hit of ginger joined in on the palate along with pear, lemon zest and pineapple with a touch of brioche; it was rich and full bodied and exuded class as well as elegance.

NV GOSSET GRANDE RESERVE BRUT in magnum- 42.5 % Pinot Noir and Chardonnay and 15% Pinot Meunier; no ML; this was extremely mild in flavor and texture; it had a nice elegance and was very crisp and refreshing with mildly spiced citrus, pear and green apple notes; it had a smooth and clean mousse and served to be a nice palate cleanser. 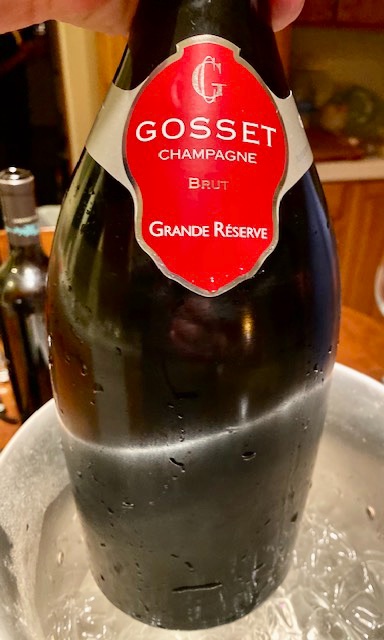 2006 LAUNOIS BLANC de BLANC BRUT Le MESNIL-SUR-OGER SPECIAL CLUB in magnum- made from two 50-plus-year-old parcels, the best of the house’s vines; this was the antithesis of the Gosset; I`ve had this before and my past notes are consistent with this one- it had an authoritative chalk-driven focus; during the first time through a small pour, it was stone fruit laden with apricot and peach most prevalent; I believe the house style is more of an oxidative one and initially this certainly confirmed it; I also have noticed that the 28 member Special Club releases tend to be big, full bodied and more oxidized; this wine shows better with a good chill and later on in the evening, a re-taste provided an eye opening shift to a much more lighter citrus profile; ginger and spice accents was present in both tastes= not so much oxidative. 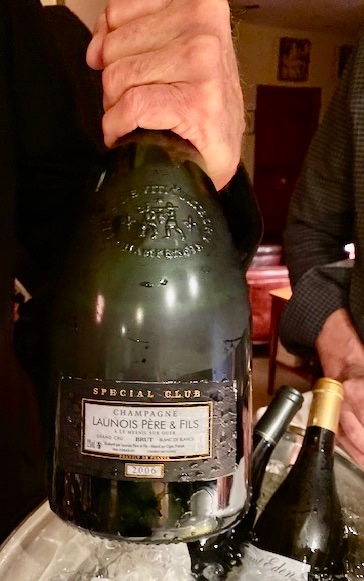 2008 LOUIS ROEDERER CRISTAL BRUT- for the benefit of my friends who have hit me over the head for opening 3 different bottles and when it first was released, I did not bring this one; and as before, it was clear that it’s got all of the stuffing to excel and its just not yet ready to offer its gifts; having said that, I loved it; its restraint allows for it to come off really elegant with lots of finesse, but you just know this is a wolf in sheep’s clothing; so it’s not time to wolf it down and I have positioned my remaining bottles in the cellar in such a way as to keep my friction hands off of them. As the ole adage states, wait until next year {or five}. 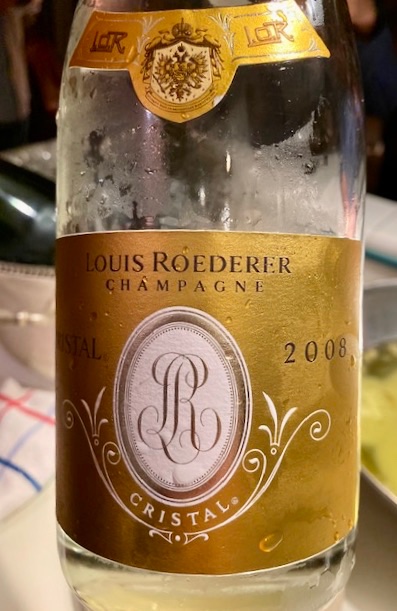 Once we sat for dinner, the wines came from all directions and we had some beauties. In order to treat friends and to celebrate his recent passing, I brought a Burt Williams made 97` Williams Selyem Coastlands Pinot so I went there next:

1997 WILLIAMS SELYEM COASTLANDS VINEYARD SONOMA COAST PINOT NOIR- this came in at an atypical 15.2% abc; from then on, everything was typical; it was fabulous; the fill was high neck close to the cork; the color was a vibrant dark red purple; the nose was redolent of spice and cinnamon laden red cherry and red raspberry with a later entry of spicy strawberry; it had a medium to full body and a long sustained welcomed red fruity finish; I kept some in the glass for the duration of the dinner and it was essentially the same fine wine well over an hour or so later; simply amazing wine. Toasts were made to the man and a few tears diluted the wine in my glass.

Other gems on the night included: 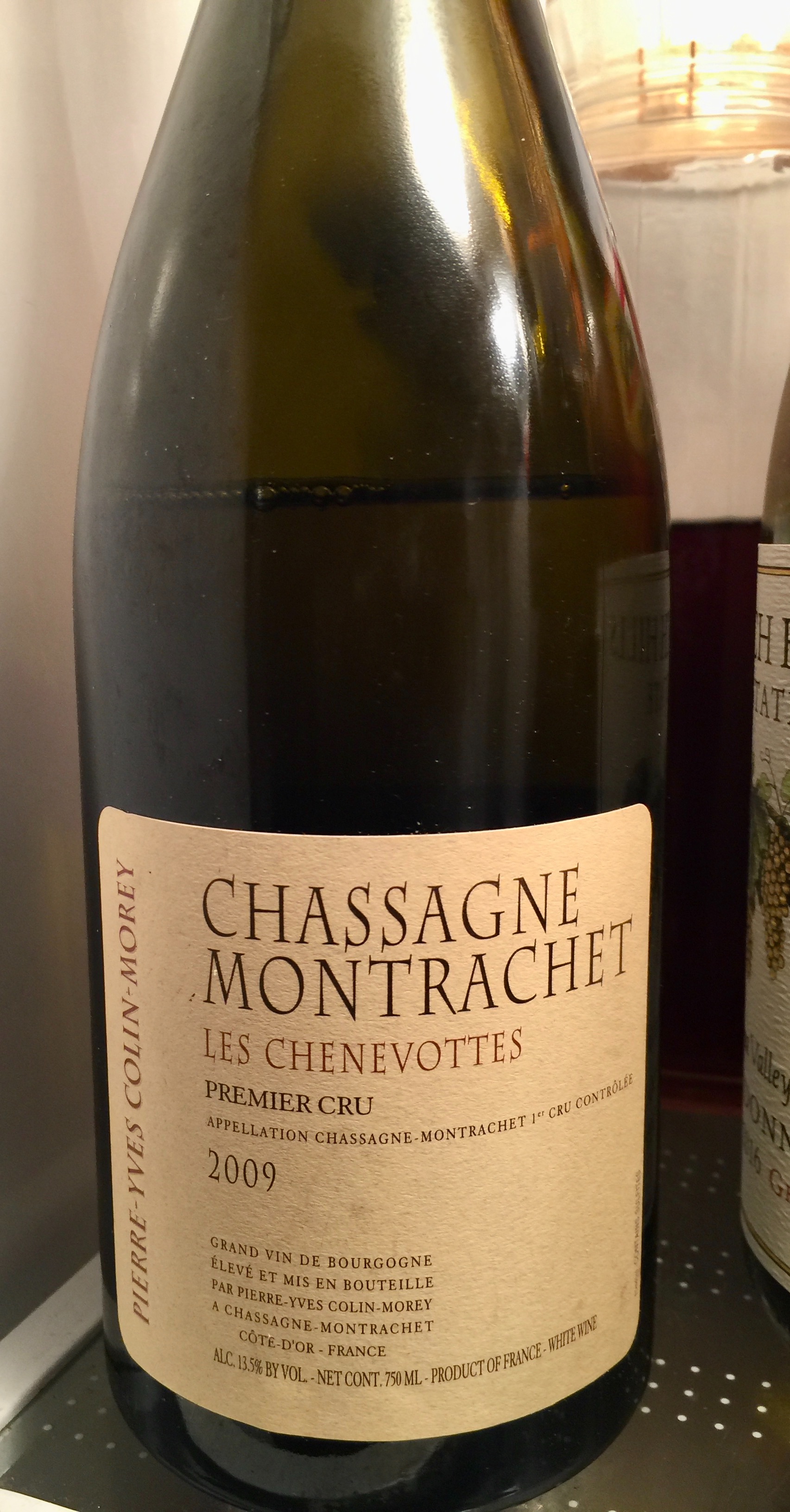 2014 VINCENT GIRADIN CORTON-CHARLEMAGNE GRAND CRU- lemon, lime and white peach dominate the nose and taste which being delivered in a creamy rich texture all the way to the back end; lots of finesse and charm as well as some power and energy.

There were other wines that I did not taste and some never made it to our end of the table after seeing a photo of the 17 bottles lined up at the end. Here’s the ones a saw:

This was just a fantastic evening and one I shall long cherish. I could not think of a better way to celebrate a special holiday occasion and a birthday at that.

Great notes like always Blake. After reading your posts last week highly praising the 09 Cristal I was very curious to read your opinion on the 07.

A fine way to celebrate both the holiday and your birthday, Blake. Well done and may you enjoy many more.

Very nice post. The 97 Coastlands was my into to both Pinot and WS. Fell in love with both. Great to see it is still drinking well.

Great notes like always Blake. After reading your posts last week highly praising the 09 Cristal I was very curious to read your opinion on the 07.

The 09 is the winner of the 2, but there is no loser as both are fabulous; the 09 just takes it to another level and maybe one more AND with consistency.

Very nice post. The 97 Coastlands was my into to both Pinot and WS. Fell in love with both. Great to see it is still drinking well.

Jim, I’ve had a lot of the 97` Coastlands and even compared to the Allen, Hirsch, Ferrington, Precious Mountain and Rochioli Riverblock, it is right up there with any of them. IMHO, only the Rochioli is better and its as good as any wine Burt made, again, IMHO.