Yesterday was Merrill’s birthday so on Sunday she had a small party at her home. Party of 8 to be exact. Er€z brought 5 bottles of Champagne and we enjoyed them on the front porch with Crab Cakes, Roasted Peppers, Brie and Toasts. While he expects a 450 word minimum per wine dissertation I am sorry to say that I will fail that exercise. This was our second party of the day so it was more about enjoyment than note taking. Aside from that I am a novice when it comes to sparkling wines. So, with that said…

2002 Pommery Champagne Cuvée Louise Brut - very similar profile to the Pailllard for me. Came off a bit fresher with more acidity and a slight bit richer.

2011 Ulysse Collin Champagne Les Maillons - From a decanter. The color was pretty dark for such a young wine. More up front fruit than the others, vibrant acidity and a finish laced with caramel/burnt sugar and an oxidative quality.

NV Tarlant Champagne Brut Cuvée Louis - 85% '99 with the remainder '97 and '98. I would have spent more time with this if I wasn’t getting tipsy from the previous wines (not to mention the previous party). Citrus and pear with a very nutty finish.

After the bubbles we retired to the dining room for a meal of Roast Rack of Lamb accompanied by several vintages of Black Cat Cabernet Sauvignon.

2000 EMH Black Cat Cabernet - The very first vintage. It was the next to last bottle of this wine in Merrill’s cellar so I felt honored to have the chance to taste it. Elegant, Dried red currant with some cedar, spice, medium bodied and seamless from beginning to end.

2001 EMH Black Cat Cabernet - This was nearly a carbon copy of the 2000 except that the fruit leaned more to the black side. Another elegant and easy to drink wine.

2002 EMH Black Cat Cabernet - The first commercial release in the new etched bottle. No picture. This one was very ripe in comparison to the prior two wines with sweet black currant dominating the fruit. Big oak signature as well as this saw 100% new.

2009 EMH Black Cat Special Selection - From a decanter. This wine upped the stakes over the previous ones with more intensity to the fruit, more depth and overall structure. A long ager and my WOTN.

2014 EMH Black Cat Sparkles Selection - This is the first unfiltered wine from EMH. Very young, primary black fruits, vanilla, spice and a leesy/bread dough note to the finish. Initial taste was delicious and fresh. Will take a few years for it to round out and drop the sediment then should age with the best of them.

Big thanks go out to Merrill for the invitation, hospitality and sharing her wonderful wines. Though we were running on fumes at the end we wouldn’t have traded it for anything. Thanks also to Er€z for bringing the bubbles. Your passion for Champagne is undeniable. It was a pleasure meeting you.

I go back and forth whether I think Black Cat with herbed lamb, or Herb Lamb with black cat, is a better pairing.

I go back and forth whether I think Black Cat with herbed lamb, or Herb Lamb with black cat, is a better pairing.

Brian grabbed the essence of all that was opened and served. No question the 2009 10th Anniversary Special Selection is the reigning queen. Erez’s selection of Champagnes, and his encyclopedic knowledge of them, enhanced the evening. His stunning lady, Yumiko, knows her EMH Black Cats well. She can pick out a vintage blind, much better than this grower/ winemaker can.

My recently disceased brother’s lady, Frances, came in from Boston to boss me around the kitchen. My pleasure.

All friends attending were friends made through wine boards. So much fun and, of course, attention to the wine and food.

Great to see the write up. Sorry to have missed the event, as I know what a terrific host Merrill is and the setting can’t be beat. Happy birthday, Merrill!

2001 Black Cat was my introduction to the wines and to Merrill, and back when I tasted it, about 7 years ago, it showed such elegance. I think the 2007 is giving it some serious competition now. From what I heard, it was a beautiful celebration.

Brian grabbed the essence of all that was opened and served. No question the 2009 10th Anniversary Special Selection is the reigning queen. Erez’s selection of Champagnes, and his encyclopedic knowledge of them, enhanced the evening. His stunning lady, Yumiko, knows her EMH Black Cats well. She can pick out a vintage blind, much better than this grower/ winemaker can.

As Chris Matthews on MSNBC says Tell Me Something I Don’t Know. I’ve attended a (Flyertalk) Champagne dinner in New York that was well coordinated by Erez.

I’m in no rush to drink my lone '09 S.S. I started drinking EMH in 2005, and had no clue (insert snide comment here) about the old label.

Happy birthday. Ah, is that the view you wake up to every morning? Amazing

I was searching for a 450 word plus tasting notes, but I will forgive mr. ITB this time. WRT bubbles, and here is a picture of them side by side 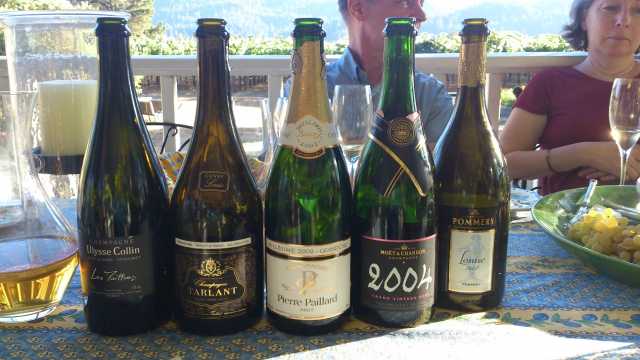 ) were both on the butter/yeast and oak notes. It is not a secret (not anymore for sure), that I have a bias towards the Pierre Paillard and I few of their vintage wines. The Pommery '02 was more on the dry side, and not with many yeast/butter notes. Much more on the floral and citrus notes, I would say. While some people noted that they preferred the 2002 Pommery Champagne Cuvée Louise I will note that b the level of the bottle, the Pierre Paillard was running faster. The 2004 Moët & Chandon Grand Vintage Brut Rosé was a classic rose not only on the color but also on the nose and palate, with more nectar/apricot and salamon pale color. Somewhat darker than I initially recalled. I had a feeling this one would work well, hence I was pleased to pull the bottle for a good party. The 2011 Ulysse Collin Champagne Les Maillons (indeed decanted) was a great surprise, with great potential (more than I initially estimated). I am probably going to get few more of that one. It shows both aging potential and getting better in the glass. I tasted more ‘open’/‘floral’ after some good time in the decanter, and I heard it drank very well the following day (the leftover).

As for the black cats- who greeted us on arrival, here are my CT notes—

I think it well earned the 95 or even 95+ It was also a once in a lifetime (most likely) special opportunity to taste this one. We all enjoyed (95 pts.)

Consistent with the tasting in Sep-15. I would note that color wise, it seemed more ‘mature’ (more brick). On the nose, it was consistent with last year (spices and black fruit), but there was something slightly different (one taster suggested very early TCA?) but other tasters have not agreed. IThe verdict was to set the bottle aside for at least one hour. That hour did the difference needed

and got it to be closer to ‘as advertised’. It brought in the consistent black fruit variety, and EMH taste. It was more consistent taste wise with EMH 2000 than 2002 (the latter was a new barrel, while '00 and '01 were not).

It kept evolving during the ~3 hours revisited. The finish got longer. I would say it had a hard competition with the 2000 and '09 SS. A truly enjoyable treat to taste it the second time. imho, it does not seem to go ‘down’ yet, but certainly worth drinking now. The rest of my notes remain mostly consistent with Sep-15 notes

I think the current ‘scores’ given so far (92-93 range at the time this note is written) reflect well, but the key would be one’s preference for new oak vs. neutral

To summarize- still one of the best from EMH, if not the best. I must be somewhat in ‘good luck’/‘timing’ to be in the right place to taste this one four times in three years. Special wine for special occasions.

(Because I scored it few times in the past, I would not add another score.)

Sparkles 2014 EMH- Showing the potential of becoming one of the best EMH production, but it is very very young now. 3 months in the bottle, if I recall correctly. It is very fruit front right now, but already enjoyable wine. I think Brian in less than 450 did get the foundations of this one below.

Needless to say, it was a very enjoyable dinner. Great crabs to start, great salad, nice cheeses and peppers with the champagnes. Thank you again for the opportunity to taste some of the older vintages side by side


postscript- I did a pre-barrel tasting of EMH '16… very promising! 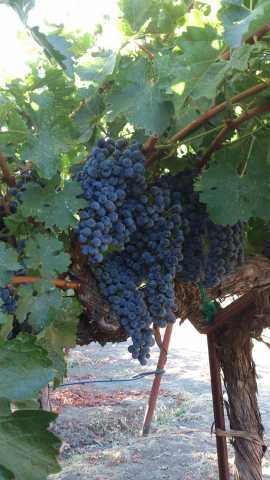 Happy birthday. Ah, is that the view you wake up to every morning? Amazing

Yes it is. I work hard and am very fortunate that I purchased this tiny property late in 1999. Work and home all in one place!

Something is missing. I thought this thread was about food and wine pairing.

No Victor. Then it would be in the Epicurean Section. I will say the pairing of Champagne with crab cakes and Cabernet with rack of lamb and roasted potatoes were nice pairings. Perfect weather and good (wine loving) friends made for a nice evening here at the ranch.

Great notes on some great wines - and with food to match thanks to Frances! A special evening all around.

Where was my invite

Oh and happy belated to you Merrill.