TN: Syrah from anywhere but France

As the expression goes every bottle is a different experience. My bottle got no votes out of 4 Syrah’s blind and including me did not enjoy it at the time but day 3 wow.

Some excellent Syrah in Portugal. Mainly in the Lisboa region but Quinta do Noval also makes a good one.

Big fan of throwing Craggy Range Le Sol Syrah from NZ, and Luca Laborde Syrah from ARG in these types of tastings.

Mike, yes I don’t get over here often. Been meaning to call. Next time your phone rings, might be me!

Mike, I was actually a litte disappointed in the Arcadian (also my bottle) because it lacked tertiary development that other early 2000 vintages I owned have had. Very tasty nonetheless, just not sure there’s much left here for future evolution.

Jenise. I agree with you on the Melville. I was happy with how my Vieux Pin showed as well.

I liked both of your wines as well as the Aussie wine.

Good to see you here Jenise!

Two best Syrah’s I’ve had this year were:

Both were amazing. The Pax one comes across as very cool climate to me, despite being from Lodi region, which is why I’m much more in the camp of ‘cool climate characteristics is more a picking decision than a region/temperature decision’.

It wouldn’t be a close ‘chave’ for me to name best syrah of my year…!

I love your taste Adam!

The best Syrah I have had this year was a 2004 Tensley Colson Canyon. It was so tertiary with aromas of dried cherries, prunes, chocolate, aged meat, leather, and dried flower petals. Tastes of cherries, dried cranberries, and pepper lingered for over a minute on the tongue. Tannins were fully resolved and their was still an acid streak that gave energy to the palate telling me this still had a few more years left in

My top ten of the year only had 7 Syrah’s!

No one called me out but it was of course a Syrah, and a 2012 (this was 2/2) - got most things wrong, however as I opened this a couple of days a go I can say that this is a nice wine indeed: 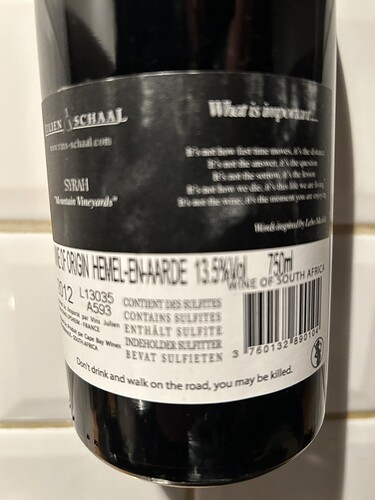 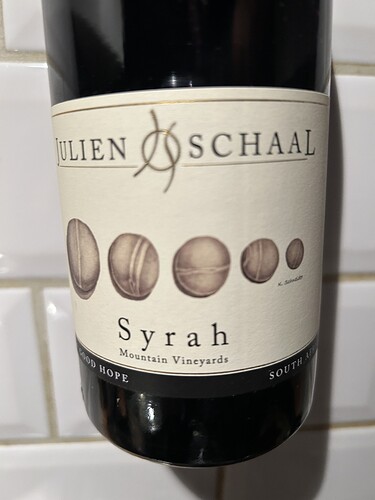 I agree with “raw” as a descriptor for Donna’s as well as their single vineyard pinots. I recently opened a 2020 Donna’s and a 2019 Anna’s pinot. I don’t agree with their winery tasting card notes. I describe Donna’s as a peppery cool climate syrah with stems and earth/dirt, and Anna’s as “it tastes like pinot noir and stems and earth/dirt”. There’s something fundamental about them and it’s the main reason why I like their wines. A few months ago I had a 2012 Donnas and it had softened substantially and was fantastic. In my own experience they do well with age and it’s why I cellar them.