This is what can happen when a random group of people show up for a party to have a good time with friends. Which we all did. 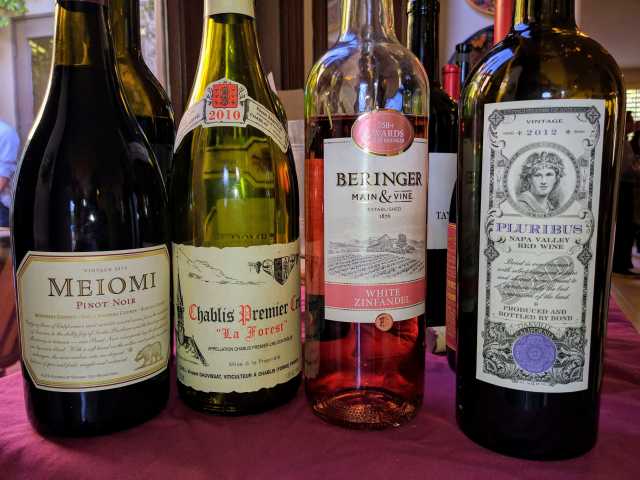 Meiomi next to Dauvissat, hahaha!!
That’s a group of friends covering almost a full spectrum of wine palate!

This is a strange picture indeed.

Thanks for the write up.

[*]NV Beringer Vineyards White Zinfandel California - USA, California (11/20/2017)
I’ll try anything once in the name of science. In fact, I made Gerry taste it along with me. His comment was classic. “not as bad as I was expecting” which I suppose I agree with as it’s not revolting but definitely pushing the off dry envelope. Candy strawberry soda pop quality. Like it or not, it’s part of the American wine history.[/list]
Posted from CellarTracker

My first trip to Napa was in 1989 and one of our stops was Beringer (along with Charles Krug and 1 other I don’t recall) Not sure if it has changed but the Beringer tour was fantastic. It was the day before Greg Lemond would go on to win The Tour in the most dramatic fashion. It happened while we were driving home but I had the trusty VCR going. Anyway, I bought 2 bottles. 1 was the 1986 Cab that I believe was the WS wine of the year. The other … White Zin. IIRC the Cab was around $30.

I never dis white Zin or it’s fans. White Zin was the salvation for many great historic vineyards.

The redeeming quality of White Zinfandel is it played a significant role in preventing many old vine Zin vineyards from being ripped out and replanted.

Well said Mike and Russ. Zin was one of my first loves. I can’t tell you how many times I would grab a bottle of Zin to share with non wine geek friends and they say, “wait, its red?”.

Wait a minute, there appears to be more wines on the table, I see a Taylor Port and a couple of others, so why the selective photo?
Is this a vinous game of Clue revolving around incongruous contributions?
Was there some kind of incriminating evidence, regarding the disappearance of the white Zin contributor? Was there ethylene glycol in the Meomi?

The wine remaining in each bottle is as one would expect. It would have been fun to watch people’s expressions had these all been served blind.

This gives me some devious ideas for our next wine group tasting. Ideas that involve brown bags and cameras.

The Meiomi seemed sorta lonely, and in these polarizing times, I thought the if I dropped the Dauvissat next door it might class up the neighborhood? (actually, my wife and I were running late, and Robert’s speech was happening as we arrived, so haste and randomness prevailed).

Funny, I noticed the poor Meiomi later and kinda felt sorry for it, but I still didn’t taste it. I had to save space for the vintage Dom (thanks FMIII).