Always a great vineyard. Was this the last vintage before Kapcsandy bought it and replanted?

Always a great vineyard. Was this the last vintage before Kapcsandy bought it and replanted?

THE HISTORY OF THE STATE LANE VINEYARD
The State Lane Vineyard was made famous by Beringer Estate as one of the original components of their Private Reserve Cabernet Sauvignon program. In 1976 they signed a 30-year lease and planted a 16-acre vineyard with Roy Raymond (later of Raymond Cellars). In 1999 Phylloxera destroyed the vineyard and it had to be ripped out. In 2000, our family purchased the property. Upon taking ownership of the vineyard, we conducted extensive soil and microclimate tests, discovering in the process how extraordinary the vineyard site is. In 2002, the entire vineyard was replanted to 5 blocks of Merlot, 7 blocks of Cabernet Sauvignon, 5 blocks of Merlot, and 1 block each of Cabernet Franc and Petit Verdot, utilizing specific rootstocks and varietal clones to optimize the terroir. These blocks range from as small as 0.2 acres to as large as 1.73 acres, and are very tightly spaced. We are planted on 16-acres to 57% Cabernet Sauvignon 35% Merlot, 6% Cabernet Franc and 2% Petit Verdot.

All of our wines are Estate Grown & Bottled and all carry the vineyard designation of State Lane Vineyard. Our first commercial vintage (2004), was produced by Helen Turley. For the 2005/6 vintages, Helen’s protege Rob Lawson (Napa Wine Company), was hired, along with Denis Malbec, from Chateau Latour, Pauillac, to oversee winemaking duties. As of 2007, Denis Malbec became our sole winemaking consultant. Denis along with Lou Sr. and Louis Jr., by virtue of extensive blending trials and redevelopment of the vineyard, are the driving forces behind Kapcsandy Family’s rise to prominence in the world of fine wines." 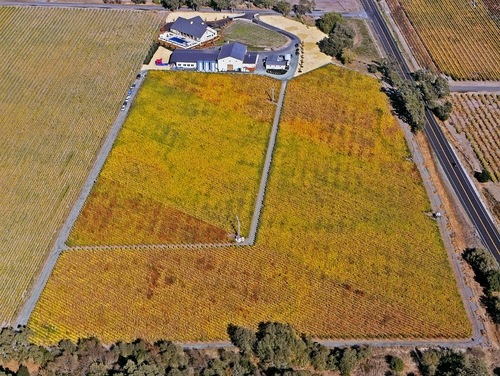