We received 38 responses from past attendees. 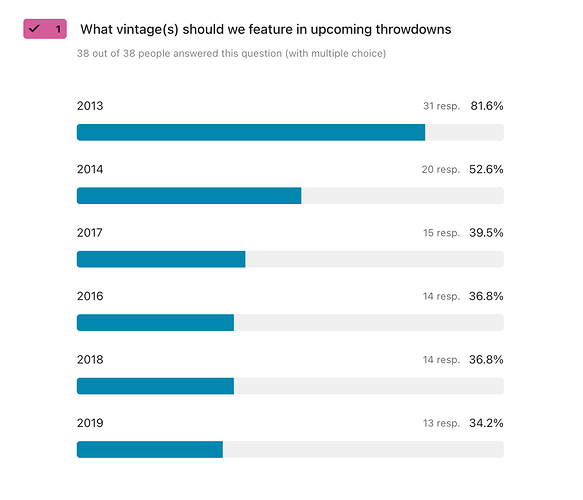 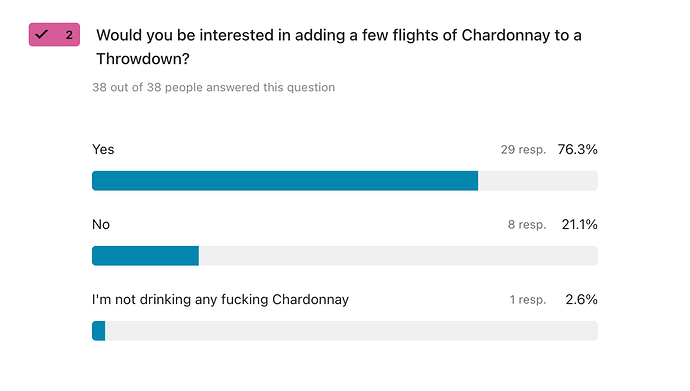 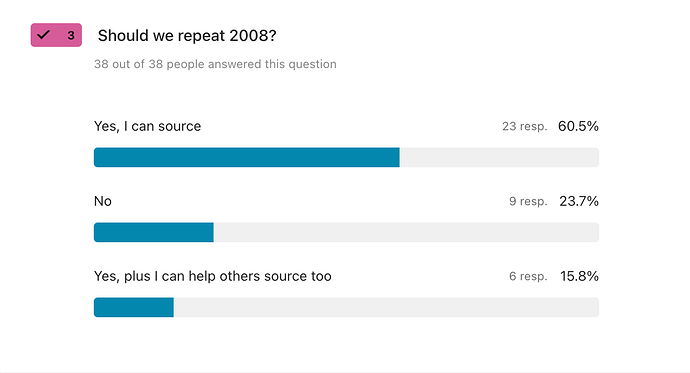 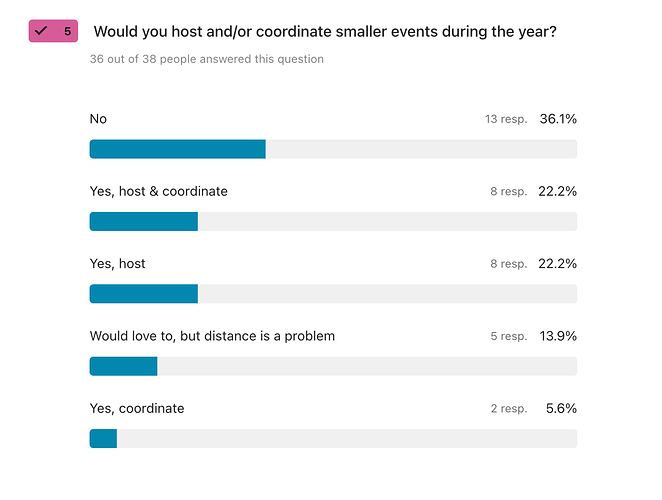 Our last question was open-ended.

Have a great suggestion to improve future Throwdowns? Here’s your chance!

I put down all the vintages you offered on the list, as the future includes three years from now and eight years from now, but I think the event would be better with 10-year-old plus wines. I would also be interested in revisiting ‘12s at some point, in addition to ‘08s. Thank you!

I got nothing, but I really liked the way you did the flights this year

I’d like to get to a point where we just go to the next vintage +1, so we aren’t skipping around all the time

A ranking system on per table and/or total to give a more general consensus on the wines that show best.

none at this time

Re: Chardonnay–can’t source but would love to taste.

Smaller groups are a good idea as are dates in spring and early summer.

Maybe do some of the smaller tastings in a restaurant, to enjoy these wines as they are meant to be enjoyed.

I’m happy to helm a committee that would solicit WV wineries for library wines for this tasting. This would allow older vintages, as well as offer attendees without cellars to simply cover the cost of the bottle rather than have to hunt down old wines. It would also alleviate the issue of WBers all buying the same producers.

A sound system. Too hard to hear the speaker if you are not up front.

Use of a PA system for the bigger events. Somehow homogenize the temperature of the wines. Open all 1-3 hours in advance.

If you are considering more and smaller events then consider a Portland location rather than a long distance winery. Would love to consider older wines into the 90’s and maybe a vertical of a particular property if possible.

smaller groups with fewer wines would be nice

Would love to do older vintages, but I don’t have much to offer

Understood the thinking behind the eight flights this time but it made it seem a bit more rushed for time and we had less time with the individual wines in order to finish on time….perhaps fewer flights of all 5 or even 6?

Hold smaller throwdowns, 12-15 attending, in conjunction with the pre-Memorial Day and pre-Thanksgiving open house events. Maybe on a Friday or Monday.

Make it clear to attendees that it is NOT acceptable to take wine brought by others without approval.

It’s really hard to cap it at 3 pm, and we need time for cleanup. Some lovely wine got poured out this last time, and that’s hella shame.

Microphone so people can hear

keep digging into older vintages- older than 2013. Keep the event moving at a good pace, 30ish wines should be able to be tasted in 2 hours.

I’ll try and get the “discussion” going.

Suggestions for restaurants in Portland is a good one, but… the days of great backrooms where restaurants are willing to put a wine group of 10-12 are mostly if not completely, gone. We’ve done more casual super small groups at Canard. St Jack’s Bar can work, but it gets noisy and better for parties than a tasting IMO.

Where else should be on our radar?

Higgins was very accommodating on shorter notice with a group of 10 back in June. I would imagine with some advanced planning that it would work out great!