The Garagiste Thread (The Great Enabler) Back to Life

25% of what I requested … worst ever on Garagiste … even worse than Salon.

Same. In fact, they told me to keep the wrong bottles and sent me the right ones.

I find a lot of Tuscany ends up being Felsina Fontalloro.

I find a lot of Tuscany ends up being Felsina Fontalloro.

I believe this mystery specifically said it is not Felsina.

From a 7/13/18 Mystery Offer: 2013 Sterling Red wine. Very underwhelming and ‘port’ flavored. Short finish. That should cure me of any mystery urges for a few more years. The (not from Garagiste) 2013 Louis Martini Sonoma Cab was better, and still had some structure/life/depth, although not a ton. It was sealed under DIAM3. 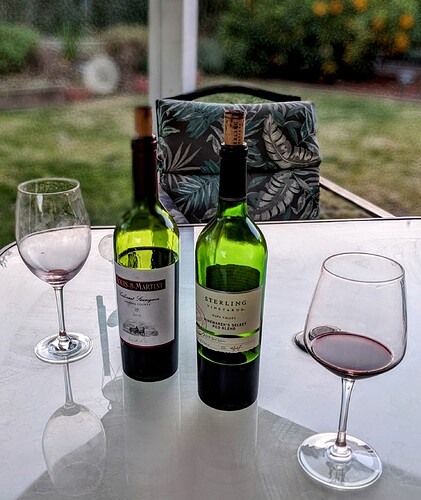 Things get a bit interesting on this beautiful summer Friday!

I was tasting through what I call “golden gak” from Napa/Sonoma last week from a host of established entities and I came across several potential targets for the lowest of low-ball offers (the “golden gak” reference is used for $50-100+ examples that a winery produced too much of, doesn’t know what to do with, is WAY over $ for what it is or is merely decent or forgettable for the luxury/golden $ point noted above – most of these are red wines so the “golden” reference has nothing to do with color – it’s more of a reference to the supposed luxury component).

One red (from a famous/long-standing Napa Valley winery – not BV) was particularly laughable at its tasting bar/mailing list heist of $65. Apart from fleecing decent folks out of their nest egg like like an 1870’s snake-oil railcar salesman (come to think of it, I’ve been called that a few times?), this wine was the ultimate insult to a “luxury” bottle - it was the above typed “forgettable”. As much as I disdain the term luxury and its association with wine, the word “forgettable” is not a word you want to use when referencing a flagship or “mailing list only” example. A few too many of those and your entire winery becomes forgettable (although, in this case, I hardly doubt it considering how many years/decades of success they’ve had).

The other interesting point?

Initially, I approached the powers that be with a rather kind and gentle offer of $53+ retail (versus the $65 it currently trades for).

They said yes too quickly.

As long as we were headed down this long and dark hole of insult, I had to give it the old college try – so I asked for…

Golden gak or not, at $13+ this blend of “high end” stock from some of their “best lots and parcels” (Cabernet Sauvignon dominant) can now be served to a wedding party of 500, a banquet of 1000, a random street gathering of 2000, a giant flashmob dance party of 5000 or whatever you so choose (Monday night in the backyard by yourself?).

Snake oil salesman or not folks, this is a “premium” (cough) Napa valley 2013 red that respectable consumers have traded $65 for…and you can have it for $13+ instead.

I’ll get out of the way now.

Thanks for the note. I came here to see if anyone had guesses on #9 Northern Rhone - This is not a Black Friday Offer!. This helps remind me / discipline me not to bite (especially when the price reference is a “compare at up to”)