Tasting all the 2013 of Romanée Conti with Aubert de Villaine

I am more known (if I am) for drinking old wines than drinking young wines. But every year, I attend a tasting of the last bottled year in DRC, presented by Aubert de Villaine.

As I am not an expert in young wines, take these notes as impressions.

I go to the headquarters of the company Grains Nobles where, as every year, the presentation of the last vintage put in bottles of the Romanée Conti wines is made by Aubert de Villaine himself. It is the only presentation of this kind he makes in France, due to friendship for the former owners of this company but also for the current ones. Pascal Marquet welcomes me and I see that an American, Bill, has preceded me, to have the place of choice at one of the tasting tables, just facing Aubert de Villaine. Being ahead, I will have the other place of choice that faces.

The tasting starts at 7:30 pm with some faithful whom I recognize. At the table of speakers there is Aubert de Villaine, surrounded by Michel Bettane and Bernard Burtschy. We will taste the 2013 of the domain of Romanée Conti. 2013 is a tough vintage with a sullen start to the season. Spring was bad with 350 millimeters of rain versus about 200 usually. The vintage was chaotic, especially at the beginning. The mildew was hard to manage, with a lot of dripping, grapes spinning and berries that abort. It was soon very certain that a small crop with a late bloom on June 25, with at least three weeks delay. Fortunately the weather was fine in mid-July. There was a beautiful summer with a bit of heat wave. Catastrophic storms affected the Côte de Beaune, which suffered its third consecutive year of hail, while the Côte de Nuits was not affected. At the end of September there was already a good maturity. The Montrachet was hailed and was harvested first because of the botrytis. The Corton was harvested on 3 October followed by stormy rains on 4 and 5 October. The harvest resumed on 6 October and there, a miracle occurred, it was cold, which stopped the botrytis. The harvest ended on 13 October and we witnessed a very high rise of degrees despite the cold. It took a lot of selection and vinification was easy. The key to this vintage is the low yields of 15 to 20 hectoliters per hectare. It was necessary to fight and biodynamics helped to fight. Aubert points out that there were many millerand grapes, that is to say, very small grains, which had to be sorted. As every year, there have been periods of great fear and nature reserves some miracles that save the crops.

We prepare our glasses and our palate with a Vosne-Romanée Vieilles Vignes Dominique Laurent 2013 and if the attack of this wine is pleasant, the final is rough, harsh, and I do not appreciate it.

The Corton Grand Cru Prince Florent de Mérode Domaine de la Romanée Conti 2013 is a wine made by Domaine de la Romanée Conti since 2009. There are three cortons, the Clos du Roy, the Renardes and the Bressandes which are vinified together and Michel Bettane would not recommend that DRC makes three separate wines, whereas Aubert de Villaine had mentioned the possibility a few years ago. The nose is a bit sweet. The attack is also sweet. The finish is beautiful fruit. The wine is gourmand, good, young and solid. It also has purity and floral character. It is very good, already on the fruit.

The Echezeaux Grand Cru Domaine de la Romanée Conti 2013 has a beautiful color. The nose is noble, pure and discreet. The attack surprises me as it is powerful. I would never have expected that. It is a great peppered wine that has great finesse in the final. It has a bright future but surprises me to be so expansive.

The Grands-Echézeaux Grand Cru Domaine de la Romanée Conti 2013 has a very rich and attractive nose. The mouth is more bitter. It is more bitter than the previous one. The touch in mouth is very close to that of the Echezeaux but because of the bitterness, I prefer the Echezeaux.

La Romanée Saint-Vivant Grand Cru «Marey-Monge» Domaine de la Romanée Conti 2013 has a very powerful nose. The attack is pleasant. This wine is made of density and charm. I love this wine that will age well but it does not have the romantic grace that I love so much. I am also a little troubled because the three wines at this stage are solid warriors, which is not their usual attitude. Is it due to low yields? In any case, these are wines to wait for at least twenty years.

The Richebourg Grand Cru Domaine de la Romanée Conti 2013 has an impressive nose of richness. What power! The attack is that of an immense fruit. The fruit is fine, precise and joyful. The wine is sweet, very open. It combines power and finesse. It is a genius Richebourg who is at this moment in a phase of absolute grace.

La Tâche Grand Cru Domaine de la Romanée Conti 2013 has a very noble nose. The wine is noble and perfect. How good it is! Aubert de Villaine will often use the word “transparent”. The purity is incredible and the wine is fluid. It is elegant and for me very much above the other wines.

The Romanée Conti Grand Cru Domaine de la Romanée Conti 2013 has a fine and elegant nose. It is a refined wine. But it has more carbon dioxide than the others. There is the richness of the fruit, spices at the end of the mouth but it is less easy to drink because of the gas. The wine is more saline than the others. It is the wine that is the most typical of the domain of all that we have drunk, but it is not nowadays ready to drink contrary to the Richebourg and not as friendly as is La Tâche. The last drop is unfortunately the most beautiful.

The Montrachet Grand Cru Domaine de la Romanée Conti 2013 is of a botrytis vintage, but frankly, I do not feel it at all. The nose has petroleum accents and no botrytis. The mouth is dry, citrus fruit. Michel Bettane says that its botrytis is very noble, but I do not feel it. It is a wine that is not opulent and does not evoke the fat or butter that is often found. It is mineral, fresh, noble. We’ll have to wait before we drink it during meals.

The discussions went well with extremely technical questions to which Aubert de Villaine replied with good grace with the support of Michel Bettane and Bernard Burtschy.

I was surprised by this tasting because the Romanée Conti and the Montrachet are more discreet than I expected while conversely the other reds are much more exuberant.

According to tradition, Pascal Marquet invites a few people to dinner, including Aubert de Villaine, Michel Bettane, Bernard Burtschy, one or two friends and Claire Gibourg who ran Grains Nobles a few years ago and now lives in Washington. The atmosphere of this dinner is always friendly and the food is excellent.

The Champagne Fallet-Gouron white of extra-brut whites has a hard time passing after what we drank, very hard for an extra-brut which has an inaccurate final.

The Meursault Désirée Domaine des Comtes Lafon 2002 is very pleasant, hospitable, gourmand with a nice vibration of the fruit. It is not a classified growth but it is a wine of pleasure drunk in honor of Christian, habitual participant of these dinners and who brought almost systematically wines of the Comtes Lafon and could not be present.

The Châteauneuf-du-Pape Clos des Papes 2005 has a franchise, a readability and a drinking pleasure that is particularly appreciated. It is a pleasure to drink this successful and gourmand wine. To put at one’s table absolutely.

The Coteaux du Languedoc Clos des Cistes Peyre Rose 1995 is a very nice discovery because the wines of Marlene Soria that I have drunk are from the 21st century. This wine of twenty years is pleasant. It does not have an extreme complexity and length but it has a balance between acidity and bitterness that makes it appealing and pleasant to drink.

The Coteaux du Languedoc Mas Jullien 2001 has a style that I like more because there is a complexity and a vibration that speak more to me. The wine is more lively and pleasant.

The lamb comes with purple potatoes whose chew is superb. It is time to go to sleep because my tiring stay in London immediately followed this beautiful tasting and this friendly dinner impose my rest.

Hearing Aubert de Villaine talking with Michel Bettane and Bernard Burtschy and understanding how much they are on the same wavelength with infinite skill and culture is a treat for me that almost surpasses the pleasure of drinking these great wines of the Domaine which are far from having achieved what they are going to give in four or five quinquennials. 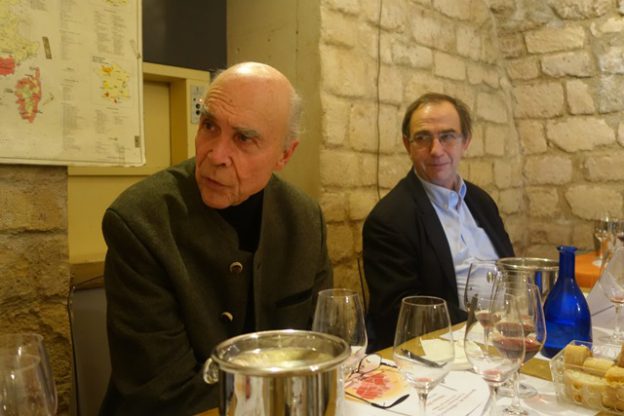 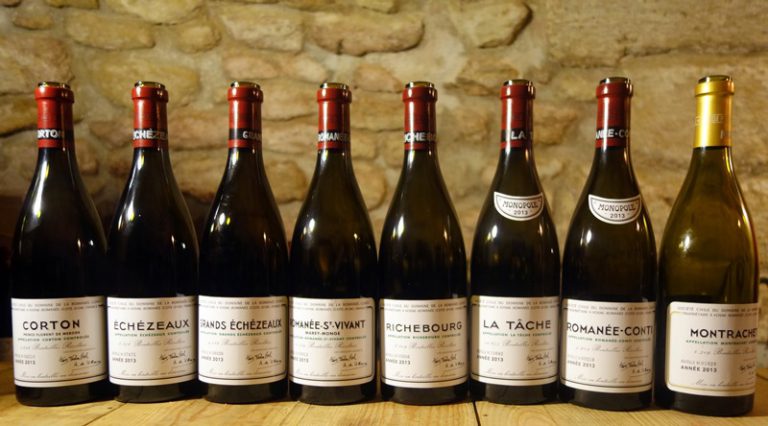 Thank you for the extensive notes. Wish I could have been there!

interesting, in the dinner afterward (I presume the dinner with ADV?) there were southern French and CdP wines? I would have thought these gents would have preferred champagne and older Burgundies!

It is an injustice to think of these wines as being uninspiring, they are being consumed very young. Who knows what will happen in 10-15 years?

A pleasure, thank you.

Dennis,
The dinner after the tasting was with Aubert de Villaine who never misses this moment.
The manager of “Grains Nobles” invites us in the small restaurant belonging to his shop and chooses wines that are not opned frequently when Aubert de Villaine is invited somewhere.

It is friendly, with no gastronomic ambitions. Just pleasure.

Thanks for the impressions, always good to see some vintage views, and any new release DRC notes are of great value, given how few and far between they are nowadays.

RC is a wine I now understand a bit better, and it is the one burgundy that should never be judged on release (or in youth at all). It needs and demands 25 plus years (as a minimum) to grow into it’s magnificence.

Thanks once again for providing us all with your inside view of this incredible tasting event!