Source | material - offer 052 The coronation of the Kabinett | Max Kilburg

Max Kilburg is definitely the type of grower we started source | material to represent! It has been thrilling to see all of the great feedback. And it is very exciting to offer a trio of 2021 Kabinetts.

I really appreciate all of the support here and wanted to give you all a heads up on this offer. If you have questions or want to order just email:

Max Kilburg
2021 Kabinett Trilogy
the coronation of the Kabinett 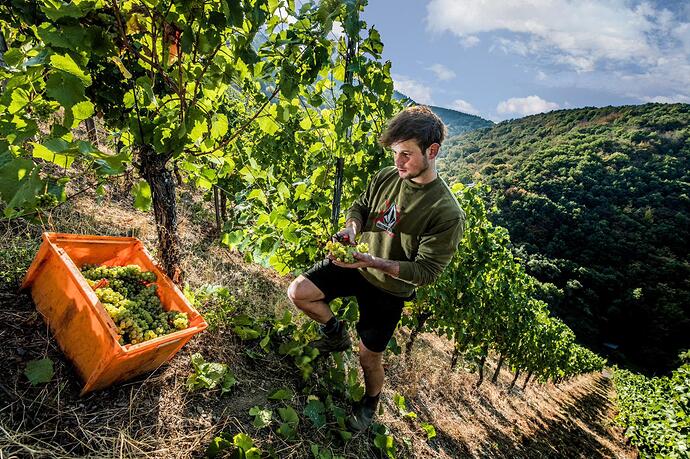 { “Mosel lovers of refined and playful wines have a new star to put on their radar screen!” }
The 135th running of the German wine auctions took place this last weekend and it marked, for better or worse, something of a watershed moment.

Now, high prices are nothing particularly new for German wines, especially at the auctions; what is shocking here is that these prices were all for KABINETTS, that once-overlooked and “most basic” of genres.

As chance would have it, here is a funny prediction we wrote in the spring of last year introducing the stunning Mosel Kabinetts of Max Kilburg to the U.S.:

“Two market predictions for you. First, Mosel wines are due for a serious upward pricing correction, though this is probably pretty obvious to most people paying any attention. Second, and this might be a bit more daring but what the hell: The ‘Kabinett’ will rather quickly become the rarest, most treasured and most expensive of the Prädikats.”

Honestly, even we didn’t think this change would be this quick, this dramatic.

Another thing we wrote in that first email is now more plainly true than ever: “The days of sub-$30 Mosel Kabinetts, at least from serious growers working in the top vineyards, are soon coming to a close.”

In fact, maybe those days are already gone? Today’s pricing on Max’s absolutely bonkers 2021 Mosel Kabinetts is beyond fair; we’d say these qualify as steals. That said, even with the 10% discount when you grab a 3-pack, you’re looking at an average bottle price of $31.16.

All this to say, it’s a brave new world and the singular lightness and intensity of the Kabinett is now being recognized for what it is, which is to say something of a national treasure for the wine culture of Germany. There are still wild deals to be found, but you are going to have to start digging a bit deeper.

Luckily, we’ve been in the Mosel for nearly two decades with a shovel in hand; the 2021er Kabinetts from Max Kilburg are not to be missed.

We have written a ton about the glories of the 2021 vintage. Keller himself has declared it the greatest Kabinett vintage of the last twenty years. In this warming world, it’s unclear, to say the least, how often we will be getting these truly cool-climate vintages. You can find our verbose vintage analysis here.

I wrote the following in this report: “I personally am going very deep in 2021. Maybe such an admission – putting your money where your mouth is, as it were – is meaningful to you personally, maybe it isn’t. I’m just telling you a fact.”

If the name Max Kilburg has been on a lot of people’s minds over the last few years, I’m not sure anyone expected he would so quickly be put at the most elite levels of Mosel winemaking. The quote above is only one gushing line from the Mosel Fine Wines reviews from the summer of 2020. The reviews for the 2021ers will come out in October. It’ll be curious to see if we have any wine available when the scores finally drop.

We first heard the name Max Kilburg a few years ago when he had worked with Julian Haart. Soon after this time with Julian it was made official, Max would take over his family’s historic estate, Geierslay, as the 20th-generation winemaker. Then we had read about Max acquiring an older-vine parcel in the Grand Cru Ohligsberg, the most famous site rising up and around his hometown village of Wintrich. Last year he acquired a tiny parcel of the shiveringly cool Geierslay, a higher-altitude site tucked even deeper into the valley.

If a trio of headliner vineyards like this gives one the sense that Max is now “big time,” keep in mind for the Max Kilburg wines he is farming here, in total, less than 2 hectares.

So yes, these are rare birds even though we’ve taken the maximum amount we could. Just give us your maximum order and we will do our best; the wines should arrive later this year.

We’ve included full notes below. To order, reply to this email or simply click here.

2021 Ohligsberg Kabinett - $39.95
The Ohligsberg is considered, by nearly every German winemaker we speak with, among the top sites of the Mosel. It has a great exposure, so warmth and ripeness is not a problem, yet parts of it are also tucked into a side-valley of sorts and the wines benefit from the cool breezes that slide down the valley. As such, the wine is both powerful and deep - not lavish exactly but it often presents a darker, deeper fruit tone, more than one taster has noted a familial similarity with Domprobst for those who know Willi Schaefer’s taut Baroque scultpures from this vineyard. At the same time the wine lacks nothing for firmness, electricity, structure. My notes somewhere say 11.5 acidity which maybe isn’t exactly correct but wow. Electricity?

2021 Goldtröpfchen Kabinett - $31.95
The Goldtröpfchen is the warmer vineyard, yet somehow the wine presents more linear (these basic notes as per Ohligsberg and Goldtröpfchen hold true with the expressions of Julian Haart as well, which is fascinating) - the tones here are a bit brighter and stone-fruited; it is also characteristically spiced and herbal, simply piercing and lithe. Welcome to Bonkers-town.

2021 Geierslay Kabinett - $31.95
This is a new parcel and a new wine for 2021. For about 37 really serious wine dorks, this site was put on the map in the late aughts by Stefan Steinmetz; it is one of the cooler sites around these parts, tucked even further up into the side-valley. As the site is basically behind and above the Ohligsberg, it shares some similarities - a dark-fruited, dense and plush palate. As the site is higher and cooler than the Ohligsberg, it is also a very structured wine, with powerful acidity and refreshing, herbal, nearly-juniper-esque savory spicy quality.

I definitely needed to see this email this morning. Yes!!!

Thanks for the support, we appreciate it!

Loved the 20ers kabinett. No brainer order for the 21ers.

That means a lot coming from you!

Lovely wines (I sell them in France so am biased, but we only sell a few wines we love.

Thanks Charles! Much appreciated.

These days I mostly focus on the wineries I have come to love over a long period of time, but a mixed case of these was a no-brainer. There is always room for a new discovery, and if half of what I have heard is true- this is one to make room for in the cellar.

I checked and at this time we still do have some left. The offer did really well, we had an extremely high reorder rate from the prior offers which is great.

Please email orders@sourcematerialwine.com if you are interested. I am not involved in the logistics part as my day job keeps me pretty busy. If you ever do need anything please feel to reach out to me.

Thanks to all who ordered, the winebeserker community is a big part of what we do.

Order in for mixed case. Thanks.

Europeans. Give me a shout.

@Russell_Faulkner has an amazing selection of the next generation German producers. If I lived in Europe I would tell him to send me a mixed case once a quarter.

He is also very kind to share his finds with us…like us he believes supporting the producers is what it is all about.