As an amateur who has struggled with H2S issues a lot, I am curious as to what you all think of Renaissance yeasts, Bravo in particular. Any success with them?

Claim to fame is that they do not produce H2S.

I think the better question would be is why are you experiencing H2S in your ferments. That is something that is avoidable. What is your nutrient regimen during primary?

I tried the Avante against Clos yeast a few years ago for a Zin. The Avante was missing the aromatics and mid palate compared to the Clos. I think WS from Enartis is the same level of user friendly yeasts, but produces something more compelling. Agree with John that nutrition in primary is something to review.

We have always used FermaidK per the recommended amounts ~1g/gallon, half of it 12 hours after yeast, and half of it 1/3 of the way into fermentation. We have not used any extra DAP, and maybe we need to.

We have used RP-15 yeast, which is supposed to have medium nutrient requirements, and each time we had H2S issues.

We are back to making the syrah this year and hoping to avoid the H2S. We have always been able to fix the H2S issues, and the wines were good. I would just rather not have to have the problem in the first place. If the yeast selection can help, maybe it is worth a look. I don’t see these Renaissance yeasts mentioned in too many places.

Your YAN’s are normal. Products like FermK is something I use in addition to DAP. FermK is like a multivitamin, and DAP is a Red Bull.

Just note that all yeast companies describe their products for marketing - and therefore the concept you will get specific flavors or aromas out of a specific yeast are improbable at best . . .

As far as nutrient needs go, I tend to be prophylactic on most adds - make sure that there is enough there to get the job done without too much being left over after primary. You can always add a touch more a little later in fermentations if desired but you can never ‘take back’ an add that is too large . . .

And I tend to do what John does, but switched to Fermaid O this year as I was told K is being reviewed by the TTB right now to see if it will continue to be allowed (not sure why - was told this by Scott Labs)

We have used Renaissance Avante on our Syrah and Grenache ferments for several years. Our Syrah is very prone to reduction and higher H2S derivatives (mercaptans / disulfides). 2017 was particularly bad and we had to mitigate with CuSO4 / ascorbic acid. These problems occurred despite following exact Fermaid-K addition protocols.

We’ve not done side by side fermentation comparisons vs conventional yeast, but suffice it to say every fermentation with Avante has gone very well. No trace of H2S and very good aromatics (and ultimately wine).

As mentioned manufacturers “embellish” in their yeast marketing claims, at least if you believe the studies that show initial aromatic/taste differences go away after a couple years age.

Lodi sells Avante in small quantities so it would be easy to trial: 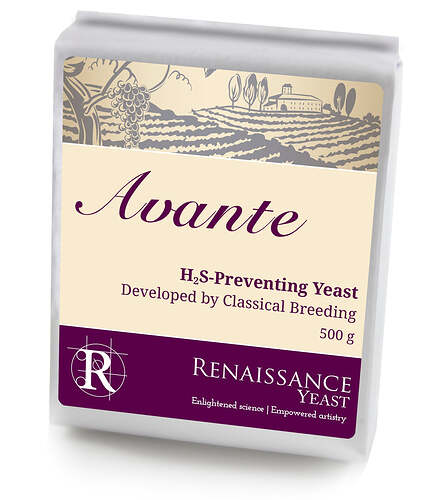 Andante has been renamed Avante in 2017. Renaissance Yeast’s strains have excellent fermentation kinetics, desirable sensory characteristics, and are produced to the highest quality standards. Renaissance Yeast is the exclusive developer of a novel,...