An interesting longish read on some of California’s early winemaking history:

You should get up and talk to George Davis at Porter Creek. He has some related stories. Pre-pro wine from the north bay was barged down from the old Vallejo Armory on the Petaluma River to Point Richmond to improve the wine coming from the valley to be sold to SF.

One article mentioned the Winehaven facility in the “Contra Costa Wine Heritage” thread.


I also found a catalogue of an “early California winemaking” museum items for sale!

One article mentioned the Winehaven facility in the “Contra Costa Wine Heritage” thread.


I also found a catalogue of an “early California winemaking” museum items for sale!

This museum/collection was in Petaluma. Some really cool stuff. Sad it is to be broken up. I loved the seeing old labels etc. when Copia had their collection on view. I believe the influx of wealth which increased rents prevented his dream though he tried to find a location that worked. This is vague recollection from a conversation at a Gap meeting. Our little butter and eggs town has become all fancy with all the good and bad that comes with it. There is a huge spat about a public art piece going in on the river. I guess you know you’ve made it when that happens?

Well, next to the river but in the the view of the turning basin, the location is not set in stone yet and that is what the spat is about. They are bathtubs on stilts. Kind of look rather Gaudi-like or AT-AT like. SF Artist. 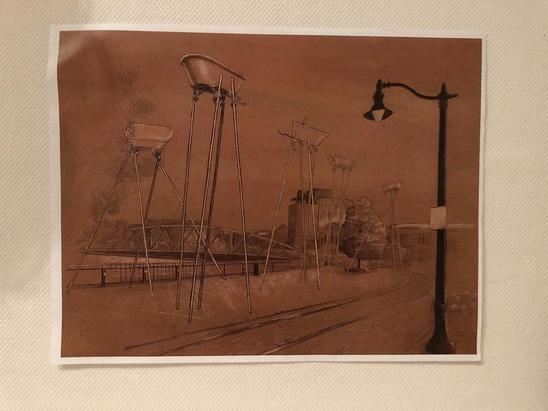 Well, if it has to go in we could always have our own St. Rocco’s event.

To actually stay on topic:

San Francisco’s 1906 earthquake and fire decimated most of the brick wine warehouses that had served as the hub of the California wine industry. After the devastation, which destroyed ten million gallons of wine, the California Wine Association (CWA), headed by Percy Morgan, moved its facilities across San Francisco Bay to Point Molate, a promontory near the city of Richmond. The CWA constructed Winehaven, the world’s largest winery. Around 37 buildings, including one that resembled a medieval castle with crenellated parapet and corner turrets, were spread out on 47 acres that had a commanding view of the bay.

Winehaven was so large it was often referred to as a city-state and it immediately became a tourist attraction for visiting dignitaries. At its peak, around 400 workers lived on the grounds in small bungalows or at the Winehaven Hotel. There was a crushing facility that could handle 25,000 tons of grapes, a cellar that could hold ten million gallons, a cooperage and a bottling shop.

Rail lines came in from Napa, Sonoma and San Joaquin counties and a pier allowed huge ships from around the world to pull up and load barrels. The CWA shipped 500,000 gallons of wine a month, with 40 ships departing to New York alone. The entire facility was shuttered by the time Prohibition went into full effect, but the CWA was left holding millions of gallons of wine it could not sell. The collapse of what was once the world’s largest wine company contributed to Percy Morgan’s suicide on April 19, 1920.

The U.S. Navy used Winehaven as a fuel depot during and after World War II, but it has been mostly vacant for decades. Amazingly, Winehaven is almost intact, although its buildings are in disrepair. Visitors can take the Pt. Molate exit off of Interstate 580 west, right before the Richmond-San Rafael Bridge, and drive a rutted road that goes through the complex. The buildings are behind a chain link fence but are visible from the road and from the beach below. The complex can also be seen by car when heading east on the bridge and are well the trip."

“Petaluma’s first winery was founded in 1884 by G. V. Fischer. He took over an abandoned brewery to handle his first crush. There were also two wineries in the Lakeville area at that time. The largest was owned by James G. Fair — a U.S. Senator from Nevada, a famous silver baron, and the man who built the Fairmont Hotel in San Francisco. Fair’s winery was located in General Vallejo’s old brick armory on Lakeville Road, now part of Hendricks Ranch. By 1893, the winery had a 600,000 gallon capacity, making it one of the largest in the state. The other Lakeville area winery was on the Marcucci Ranch nearby.”

If you’re interested in pre-porhibition California wine history, I would recommend “Tangled Vines: Greed, Murder, Obsession, and an Arsonist in the Vineyards of California” by Frances Dinkelspiel. As you can see from the description below, it is about much more than the Wines Central wine warehouse fire. She goes into quite a bit of detail on the early history of wine in California. Actually, to a point that was a bit annoying to me since I wanted to learn about the arson and its aftermath. It is thorough and well-written.

On October 12, 2005, a massive fire broke out in the Wines Central wine warehouse in Vallejo, California. Within hours, the flames had destroyed 4.5 million bottles of California’s finest wine worth more than $250 million, making it the largest destruction of wine in history. The fire had been deliberately set by a passionate oenophile named Mark Anderson, a skilled con man and thief with storage space at the warehouse who needed to cover his tracks. With a propane torch and a bucket of gasoline-soaked rags, Anderson annihilated entire California vineyard libraries as well as bottles of some of the most sought-after wines in the world. Among the priceless bottles destroyed were 175 bottles of Port and Angelica from one of the oldest vineyards in California made by Frances Dinkelspiel’s great-great grandfather, Isaias Hellman, in 1875.

Sadly, Mark Anderson was not the first to harm the industry. The history of the California wine trade, dating back to the 19th Century, is a story of vineyards with dark and bloody pasts, tales of rich men, strangling monopolies, the brutal enslavement of vineyard workers and murder. Five of the wine trade murders were associated with Isaias Hellman’s vineyard in Rancho Cucamonga beginning with the killing of John Rains who owned the land at the time. He was shot several times, dragged from a wagon and left off the main road for the coyotes to feed on.

In her new book, Frances Dinkelspiel looks beneath the casually elegant veneer of California’s wine regions to find the obsession, greed and violence lying in wait. Few people sipping a fine California Cabernet can even guess at the Tangled Vines where its life began.