All the talk of wines you have come around to, made to corvin a glass of Etna white…

2014 Terra Constantino Etna Bianco: reminded me why Italian whites are a hidden gem. 75% Carricante, 15% Catarratto and some mixed varieties. Golden yellow color, hints of grapefruit, peach on the nose, medium body, saline, hint of spice (find it in most volcanic wines), excellent acidity, long-gripping finish. A seriously delicious wine. I picked up at a local retailer in NYC for $25. I really love white Burgs, but this beats out most of them at 2x-2.5x price. Love to put this down for 5-10yrs and see how it evolves. Paired really well with grilled chicken, had enough structure and acidity!

Looks like they are from the south-eastern slopes of Etna, which I hear is great for whites. Carricante is a fabulous variety, perhaps Italy’s answer to Chardonnay, no wonder Rhys is giving it a shot in California.

Don’t know much about the producer, but I will seek out more Etna whites from eastern slopes and Italian whites in general.

am longtime fan of Italian whites and Rhys Chard as well…Not familiar with this grape however…where in NYC did you source this gem?

Along the same profile, look for Grecanicos from Sicily.

am longtime fan of Italian whites and Rhys Chard as well…Not familiar with this grape however…where in NYC did you source this gem?

Picked this from Some good wine in the village…went there to get a Canary Island red, they also suggested this. The shop has a lovely collection of Island wines (Sicily, Corsica, Sardinia, Tenerife).

thanks, appreciate the info.we usually get down to city 3-4x/yr…Oldest daughter is on staff at Sloan Kettering…Will see if I can sneak away and get down to the village…Back in the Pleostcine Era, I did my grad work at NYU

Drinking the '16 on a Tuesday, so what a time to bump this thread. I am smitten by whites of Etna recently and picked up the 2016 Terra Constantino DaEtna Bianco. Lovely wine. Organically farmed. Lemon and and hints of mango. Ripe, but it has an electric backbone, vibrant and crisp with a salinity I find appealing in Etna. Some crushed herbs come on the stony finish. Really nice. $25 all in. 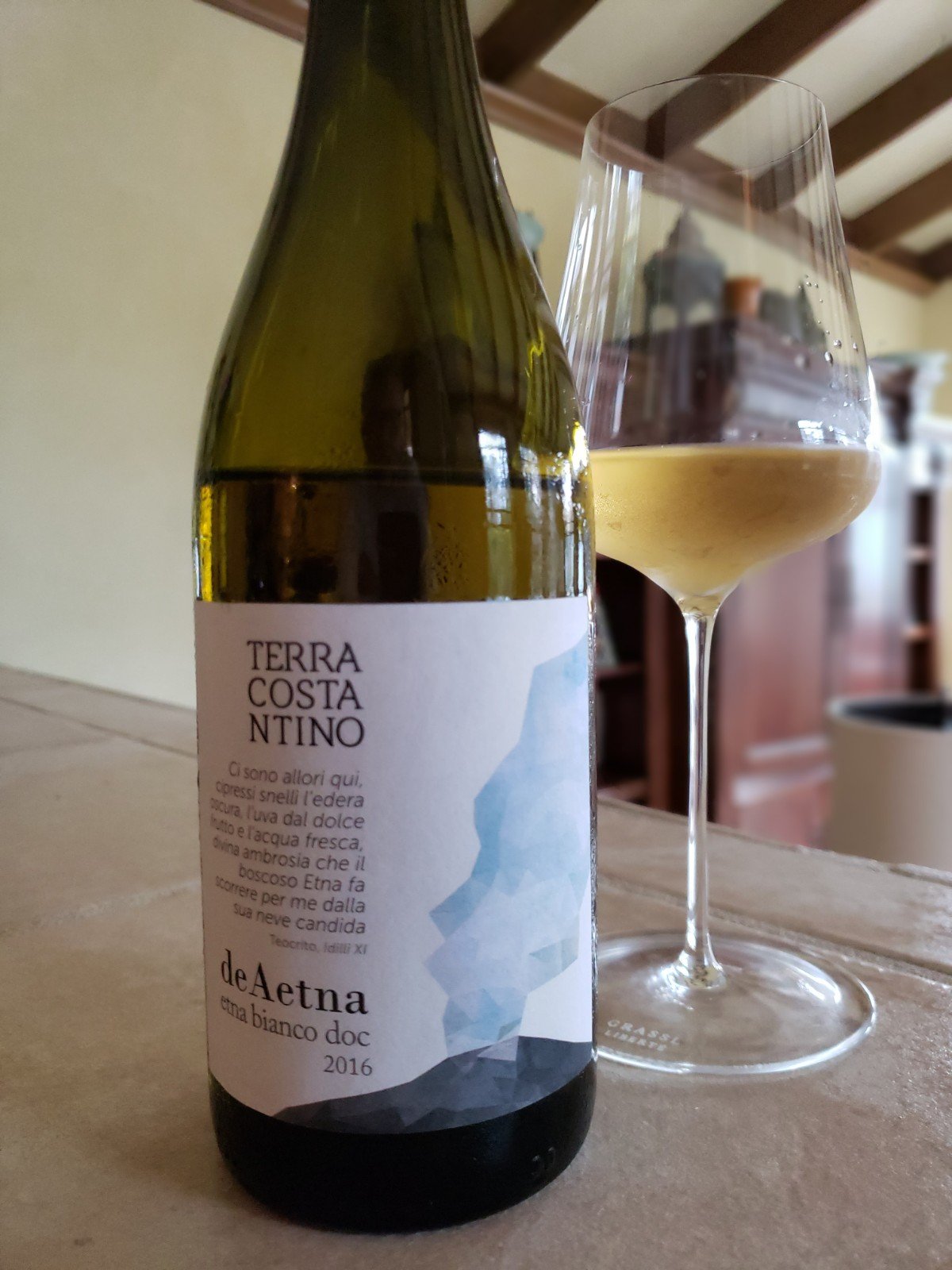 Dennis, thanks for reminding me to fetch more Etna whites.

I recently had a bottle of 2015 Bonaccorsi Val Cerasa Etna Bianco. It was 100% Carricante. Maybe more medium bodied, but great fruit and it definitely had a similar electric backbone that you are describing. Very enjoyable.

I think this wine would be right up your alley - Cantine Gulino Sicilia Pretiosa Albanello. It isn’t from Etna specifically but it is white and it is from Sicily and it has that salinity and stoniness you note in the Terra Costantino.

Thanks, guys, new wines for me to check out.

I stopped drinking a little over a year ago but I still buy for my wife. Today I purchased some Pecorino from Tiberio. Got some high praise from Ian D’Agata whom I really respect.