HIRSCH-Tasting in Berlin - Stelvin since vintage 2002

Yesterday the austrian winemakers Sandra&Johannes Hirsch of the estate Hirsch from Kamptal were in Berlin presenting the following wines: 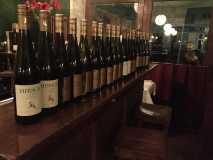 The aged Riesling 1999 Heiligenstein was a revelation, the wines of cool-climated vintages like 20102013 is worth seeking for and the wines of 2015 were outstanding, especially the 2015 GV Lamm was mind-blowing. I strongly recommend to buy 2015. Also good to see how good the wines age under STELVIN. With the vintage 2002 all wines were bottled with Stelvin, he was the first austrian winemaker who did this. WOTN was 2006 GV Lamm, the mariage wine of Sandra&Johannes, based to the drinking pleasure. Bottom-line, the wines were impressive due to its clarity, precision, minerality, spice with aging potential and quite food friendly.

“Regarded as one of the young, leading winemakers in Austria, Johannes Hirsch combines the quality of his renowned vineyards, dedication to viticulture and precise winemaking to craft wines of the highest class. Johannes works exclusively with Grüner Veltliner and Riesling, bottling most of his cuvees as single site, single terroir wines – the Lamm, Gaisberg and Heiligenstein vineyards.

The Lamm vineyard, with its south-facing slopes, and soil composed of loess and loam lends itself to wines that combine power, focus and structure.

Considered to be Grand Cru quality and one of the best vineyard sites in Europe, Heiligenstein, a bowl-shaped vineyard with southern exposure and conglomerate soils of desert sandstone imbedded with decomposed volcanic and carbonized vegetation, produces classy, celebrated wines of great purity.

In close proximity to the Heiligenstein vineyard, the Gaisberg vineyard exhibits soils of fertile brown earth and crystalline rock creating wines that are dense with mineral and intertwined with exotic floral notes.

Johannes farms his vineyards sustainably and biodynamically and is certified by RESPEKT! Natural efforts have been made to ensure physiologically ripe grapes including high density planting (5,500 vines per hectare), low trellising, canopy management and handpicking. His father began using manure for compost over 30 years ago by trading hay from Hirsch’s agricultural fields to a friend Robert Paget in the neighboring village. Paget is a cheesemaker and his goats and water buffalo eat the hay and their manure is transported back to Hirsch for compost to fertilize Johannes’ vineyards.

The winemaking process is marked by ambient yeast fermentations, whole cluster pressing, slow vinification, late bottling and release of the wines upon appropriate maturation. In 2003, Hirsch was notably the first producer to bottle all level of his wines in Stelvin closure. A five-year study has just been completed by Austrian wine-magazine Vinaria validating the efforts surrounding Stelvin closures. Johannes Hirsch is one of the most innovative and renowned winemakers in Austria and was name “Winemaker of the Year” by Falstaff Magazine in 2011.”

Martin, I just got a small lot of 07 Heilegenstein which I’m interested in tasting, Can you infer from your tasting whether I should be patient, or try one soon, potentially as part of our Thanksgiving Dinner

I had no 2007 Riesling Heiligenstein at the tasting. But I looked and found he received 94/100 by FALSTAFF. I would open it.

Thanks, Martin. The wines sound very interesting. And it’s great to have such a good data set on the Stelvin.

My Hirsch Stelvin stash goes back to a single bottling they did under the cap in 2001. (Or at least that is what was imported to the USA.) That first vintage was a little wobbly on a bottle by bottle basis (I think I have one left.), but since then the results have been fantastic.