Has anyone used an air fryer?

Are they any good?

I have not personally, I have so many gadgets in the kitchen already I just have not found the interest. My neighbors have one and they love it.

I am planning one to fry my Thanksgiving turkey. No worries about a deep-fryer grease fire burning down the roof garden.

At my job people are able to give points when someone helps them out with something so I was browsing the catalog to spend mine. This was one of the items which I didn’t have but seemed potentially useful. Other than the whole counter space issue. I had never even heard of the gadget before.

So it would be free other than opportunity cost.

Might not be worthwhile, if fried food is not your favorite.

We have one, a sorta random purchase my wife made. It works well enough for frozen fried things, quicker than heating up the oven and does a nominally better job. That said, the basket is small, so if you’re trying to make frozen fish sticks (or whatever) for more than 2/3 people it’s not ideal.

I’d not buy the thing again, though we only eat that category of food 3-4 times a year. Plenty of cabinet space, but I’d still prefer to do without the thing.

Mother in law has one. Takes forever to make fries for a family of seven. They are nice enough when they arrive but it’s 3-5 batches.

Maybe, doing the turkey this way might not be a good idea.

I was thinking of it for the frozen lumpia (filipino spring rolls) that Arnold likes to buy.

Not the clearest image, as I cropped this from a larger picture. A Berserker whose partner is very adept in the kitchen served these chicken wings for dinner. Wings were prepared in an air fryer, so weren’t oily whatsoever even though they were nicely crispy… 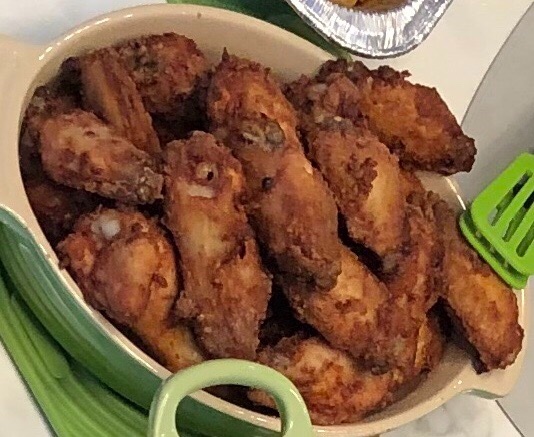 What is the difference between an air fryer and a convection oven?

What is the difference between an air fryer and a convection oven?

I bought the Cosari Air fryer as people were complaining that the Philips has a very small basket and you couldn’t fry much at a time. I wasn’t going to buy one because my Breville Smart Air Toaster oven (which I LOVE TO DEATH) has an Air Fryer Function, but for true Air Frying, it’s a pain in the butt to clean because what little grease there is gets sprayed all over the inside and it’s a pain to clean.

The Air Fryer will take up counter space, but the basket is so easy to clean I love it. It won’t hold as much as the Breville at one time, but it’s supercharged. Wings are amazing in there. I think it would do an amazing job with the lumpia, so long as you spray some oil on them before putting them in. They still need some oil, but nothing compared to deep frying them.

Much appreciated. Unfortunately Cosari isn’t one of the fryers I have available for points (“just” Presto, NuWave, Philips, Elite Platinum, Cuisinart, Ninja, and Instant Vortex).

On the other hand I just spent all my points on another iPad so it will be a while before I have to decide again.

Nice! I would choose the iPad too.

Bumping . Any further info to share . My wife just bought one . Seems like a waste of money and space -haven’t told he that -yet.

I found one on sale and it hasn’t arrived yet, but my (also single- so I can’t speak about cooking large amounts) makes wonderful looking arancini and fried fish (he is an avid fisherman).

Absolutely kills for bacon. Great with broccoli and asparagus as well. For bacon, just cut into smaller pieces (3-4 pieces per bacon strip, let’s say) and be sure to shake at least once during the process

I’ve been using my convection oven to do bacon. Put them on a rack which is placed in a sheet pan. About twenty minutes at 350 depending upon thickness. I don’t even preheat the oven. Comes out perfectly crisp.

I’ve been told by several local chefs the air fryer is just a small convection oven that moved fast and the basket keeps the food off the surface. Hence my using racks in the convection oven for bacon.