Any experience braising the Flannery zabutons?

Following because I also bought both the short ribs and zabuton, but my plan was to slice thinnish (1” or less) and grill. Just hadn’t gotten around to doing so yet.

i would strongly recommend against braising this cut, especially from flannery, as it won’t fully realize its potential. what makes a zabuton so great is the contrast of textures and its ability to take super high heat and serve at a full medium while retaining all the juice and fat you’d want. braising takes all of that away.

Katie’s feedback to me was different, though not sure she’s prepared them in a braise, necessarily: 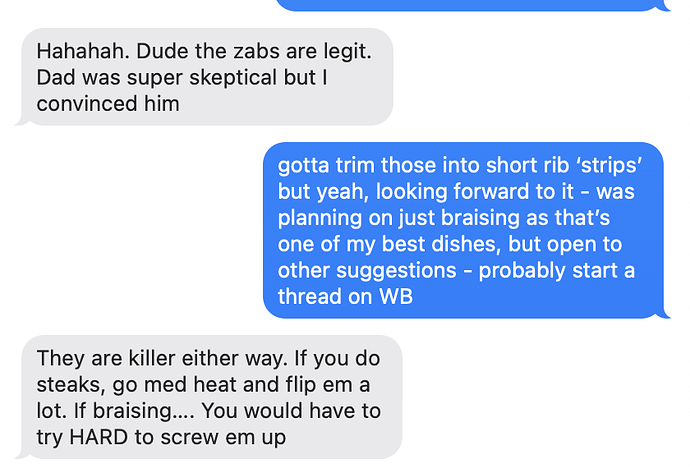 At least I’m consistent - I started a thread about this 5 years ago as well, lol, yet don’t remember what I did with the last one!

I have a zabuton cut in the freezer, not sure exactly how to prepare it… Do I slice it thin and prepare the slices individually? Reverse sear the whole flap/pillow? Cut into steaks?

If @Kenny_H says ‘low and slow’ is the best method, I’ll believe it, and hope that braising is legit as an option, since it’s very much ‘low and slow’.

I’m w YB on this one. Only reason to braise is tougher cuts. Being a big fan of chuck eye steaks, I would stick to the reverse sear method using the whole cut. Because of the texture contrasts and marbling, I can also see thinner steaks cooked at med-high temps to somewhere in the med-med/rare range with a high heat finish.

If you are counting on the braising liquid, don’t sweat it. Just use some beef stock and reduce as normal.

Following this as well since picked up one of these for the first time with the last Flannery order.

Echoing Yaacov and Kenny. Zabuton just isn’t meant to be braised. I think you’re unlikely to enjoy the results Todd. Kenny has you covered on how to prepare these.

I’ve only eaten Zabuton/Denver grilled. It is already tender, why boil it?

Cooked one last night , reverse seared.Cooked at 300 in the oven to 140 then seared for 2 min a side and edges.Perfectly medium -.Great flavor and texture.

Had the other half last night ,same method same result.As was mentioned up thread this cut shines at a slightly higher temp.IMHO!

I’m closer to the reverse sear with this, too, although I’d pull at 125

Single best sandwich ever was taking two chunks of sourdough, buttering it up, browning it in a skillet with a bacon press on top, adding bbq sauce, extra sharp white cheddar and then sliced Flannery zabuton. Spectacular. 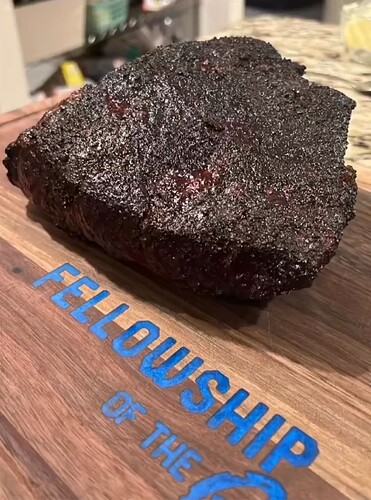 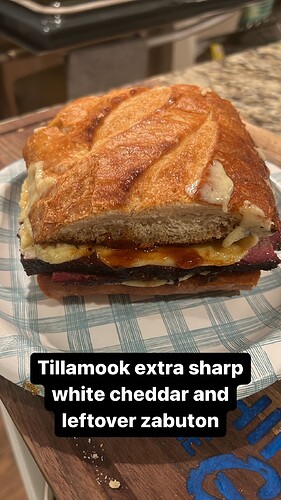 You smoked the zab?? Tell me the details

You smoked the zab?? Tell me the details

Didn’t come out quite like I expected. Used post oak and cherry on my offset (Mill Scale 94), Kept the temp pretty constant at 225 for 8 hrs, but it kept at a constant 155ish for the last 4 hrs. Hell of a long stall for that size of protein, and I’ve cooked more than my fair share of plate ribs. Came out a bit drier than I expected, but still tasted fantastic. I’ve gone reverse sear with it previously and would probably stick with that approach again.

Next day pic (cold) when slicing for a sandwich. 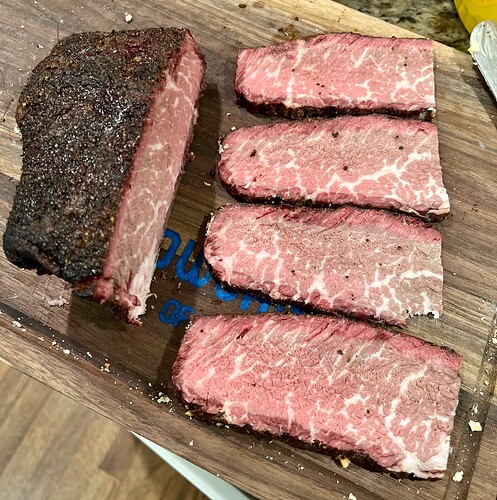 I did the overcook on a Flannery roast, crazy how good it was.

Sandwiches on the docket for lunch tomorrow.

Ok, if @Kenny_H tells me to reverse sear it, that’s what I’ll do. Have some demi glace in the freezer I keep refilling, will heat that up for those who want some sauce.

I’ve never reverse seared a steak this size, so basically I just low-and-slow, then sear, then cut into steaks?

When will it be ready? I will be in your hood later if you need help…. eating

Ready Thursday…for my daughter’s early birthday family dinner, with the boyfriend (hers, not mine)

How big is the cut? If over 4lbs probably bump that oven temp to 240.

My fatal flaw on this one was thinking it would behave in a manner similar to short ribs / brisket (rendered collagen/fat), but that was a mistake on my part.