There’s been a lot of talk over the years here, tastings, dinner and so on… the time has come for one wine to break the 100 point system with 110/100!

Couldn’t be happier for the achievement to come from a Barolo/Nebbiolo wine. 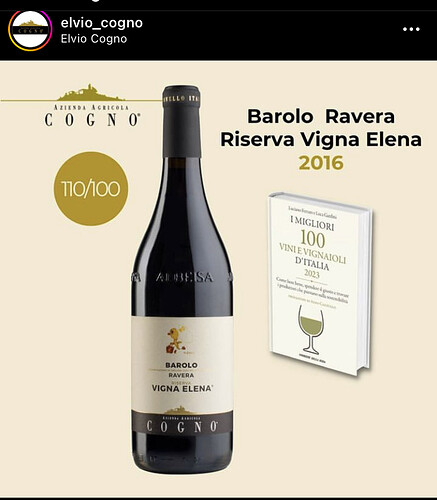 In Italy we say “la matematica non è un’opinione” but maybe it is after all!

Hasnt that one Italian reviewer had 110 points actively a part of his scores for years? Cant remember his name, but the guys gives 100s out like candy.

Luca Maroni? I’ve never seen one over 100, but I’ve seen loads of extremely suspect high 90s. I believe there is an Australian reviewer who awards similarly outrageous scores. One way to get your name out there I suppose.

I thought it was him, but I just checked his website and it’s not on there. I did a search for 110 point wine score and couldn’t come up with anything. I’m wondering if whoever used it got ridiculed enough that they gave up on it.

Next up: wine point rating on the Kelvin scale

This thread is pure 25 karat gold.

Figured it out, it’s not Luca Maroni, it’s Luca Gardini. 4 Brunellos and 2 BdM Riservas got that in 2016.

Figured it out, it’s not Luca Maroni, it’s Luca Gardini.

Gardini is in a league of his own…

If I recall correctly he also had a serious fall out with a number of wine writers/judges after not paid out their agreed fees from an event he arranged. To the point that Tim Atkin (believe others as well) called it him out publicly on Twitter.

If I remember correctly, Luca Maroni used a 99 point system, arguing that a 100 point wine could not exist.

Ha! I saw this on Cogno’s IG yesterday and had a good laugh. Good thing I just ordered 660 points worth of it.

Christy Canterbury made an Instagram post, Atkin has a reply in it: Christy Canterbury MW on Instagram: "Ciao, @gardiniluca! We are wondering when you or your business partner will pay us for last summer’s work @biwawards. We have waited 10 months. . . We international judges (@timatkinmw @spanishwinelover @kenichi_ohashi @yang.lu_ms) will miss #BIWA this year & wish the best to all Italian wine producers recovering from the difficult start to 2020."

He might be the worst wine reviewer in the world. I have tried a few 95 pointers from WTSO and they are low 80s on a good day. Makes Suckling look creditable.

Figured it out, it’s not Luca Maroni, it’s Luca Gardini.

Luca Maroni sleeps with the fishes

Huh that’s an odd take for a mam who hands out 97-99 points like candy to primitivos and ruches.