Our Story is About Family-

It is how we started, why we make wine, and what we hope accompanies our wines at your dinner table. Et Fille, which means “and daughter”, was co-founded in 2003 by father and daughter winemakers and is now in its second generation with daughter Jessica making elegantly complex wine inspired by her late father’s legacy and daughter’s future. We craft wines from our sustainably farmed vineyards in Oregon’s Willamette Valley.
Find out more about us Here- Et Fille Wines — A Winemaking Legacy — Et Fille Wines 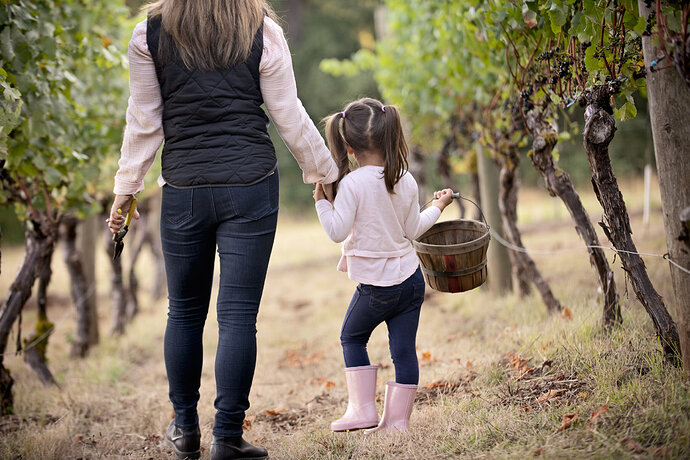 We are committed to sustainable winemaking-

We own a small test vineyard in the Chehalem Mountains, but also manage blocks at six sustainably farmed vineyards located throughout the Willamette Valley. These sites represent the best of the major soil types of our region, which creates diversity between our wines and adds complexity to our blends of Pinot Noir.
Hear from our winemaker about the vineyards we work with-
https://www.youtube.com/watch?v=6qsHDjJv42s

I was assigned the wines from Et Fille, an Oregon producer in the Willamette Valley. This is a winery that was founded in 2003, and while I have tried the wines a couple of times, it has been a few years, so I was happy to get a more recent take on these two bottlings. I opened both wines about an hour before serving but did not decant, as we were going to try them throughout the evening and I wanted to see how they would perform out of the bottle like most consumers would drink them. I was going to pair them with salmon, but our local store didn’t have anything wild and fresh, so I decided to get some local Carlton Farms bone-in rib chops instead, and dusted them with Tom Douglas’ Rub With Love, which is good on salmon, but also nice with pork. Kathryn also sautéed some apples in butter and thyme for a side dish. We wanted to test these wines with food as well as on their own. Both were tasted in Grassl Cru glasses.

2017 Et Fille, Pinot Noir, Willamette Valley – Pommard, Wadensvil and 777 from a number of vineyards on different soils, 13.6% listed alcohol, 3.69ph, 5.4 TA and aged in 17% new oak as well as 42% one year old barrels. $28 list price. A very nice nose, with juicy cherry/berry fruit, cinnamon/clove, and some oak spice and maybe a whiff of anise/fennel. With airing a light earthy note comes in, too, which adds a nice complexity. On the palate, a nice burst of cherry/berry fruit, juicy and forward but nicely balanced, with spice/clove, earth and anise. This feels like there’s a little more acid here, probably a combination of vintage and winemaking style. This also made it work surprisingly well with the sautéed apples. Probably best over the next 3-5 years, but it could surprise.

2018 Et Fille, Pinot Noir, Kalita Vineyard, Yamhill-Carlton – Pommard and Wadensvil on marine sedimentary soils, 13.9% listed alcohol, 3.69ph, 5.4 TA and aged in 33% new oak and 33% one year barrels. $60 list price. The aromas here are more on the darker fruit spectrum, with boysenberry, cherry and raspberry fruit, just bordering on jammy, but not overripe. Darker (for OR) boysenberry and plum fruit on the palate, definitely a bit toastier and richer, and while the listed ph and TA are the same, this feels bulkier and more intense, but also a bit less lithe on the palate. While equally good with the pork, the tangy apples bring out a light whiskey barrel note on the palate. As the wine opens over a few hours, the richness and toast come out a bit more. This seems a bit young now, and should be better and more integrated with some bottle age, but I’d still be tempted to drink within the next 4-8 years.

My favorite was the 2017 Willamette Valley. While my palate definitely leans towards more pretty, transparent OR wines, we sometimes get questions here on WB like “What OR Pinot should I buy if I like CA style Pinots?” I think these would be be good candidates for those members who want something with more “oomph” but that still tastes like Oregon. These two Et Fille wines aren’t as pure, pretty and transparent as Goodfellow, Vincent, or Walter Scott. But they are flavorful and still maintain balance, something that can’t always be said about some of the “bigger” OR Pinots, both in size and name . And Kathryn, who loves wine but isn’t a studied “geek,” liked them even more than I did. Give them a try if you find many of the board favorite OR Pinots a bit on the lighter side for your palate.

So glad to be introduced to these wines - and the producer. I had heard about Et Fille, but never had the chance to taste any of their wines - I have been missing out. Opened all three via Coravin - so that I could try them solo - without food; then again, with alongside food. Gave me the chance to figure out what to eat with each of them. And, gave me an excuse to try these over the course of a week.

2019 Et Fille, Viognier, Deux Vert Vineyard, Willamette Valley
Medium straw yellow with some green notes - bright and clear. Lots of apple, tart tangerine citrus, cream and honeysuckle. The nose is very restrained. The florals normally associated with viognier are very much in the background in this wine. For me, rather surprising. Pleasantly assertive palate with more citrus but combined with a very healthy dose of minerals (stone, chalk), along with a slight parsley-like bitterness. Acid is high; medium alcohol. After trying this for the first time - served to my wife who swore it was a Chablis. Really surprising wine. The next day, I opened two dozen, local Rocky Neck oysters - I live in New England. Amazing pairing - wish I had a seafood stew to go alongside this one - would be a great combination.

2017 Et Fille, Heredity Pinot Noir, Willamette Valley
Bright medium to light garnet with a moderately intense nose of dried cherry, cranberry, mushrooms and woodiness - alongside some muted butterscotchiness. The palate is a bit riper with the same cherry alongside pomegranate and some light pepper. Tannins are moderate. Acid is moderate-high. Medium alcohol. Some nice complexity. Very youthful, this wine was nicely balanced alone - but, the stood up really well on day two alongside some Cacio e Pepe. Did not get lost amongst the stronger cheeses; and, the pepperiness in the wine complemented the dish. Drinkable now, but, will clearly improve over the next 5 years.

2012 Et Fille, Pinot Noir, Kalita Vineyard, Yamhill-Carlton
Slightly hazy moderately garnet with some signs of aging (light browning) at the edge. Nose has baked cherry, licorice/anise seed, smoke, moss and some nutmeg. Palate had dried cherry, plum, light florals, and a bit of earthiness. Moderate-plus acid; moderate coarse tannins. Medium body. Nice complexity alongside some length of finish. Truly the star of the three wines. So glad that this got opened on the first cold day of the season - alongside our fireplace. This wine was made for this. Served this alongside a slow roasted chicken with mushrooms, risotto, and roasted veggies. A perfect Fall match. For a nearly decade old wine, this one is still drinking like a baby. Delicious now, with the tannins, body and intensity, this one will clearly develop. I want to get a few more for now; and some to tuck away.

Great experience with all three of these wines. As mentioned, the white is a tremendous surprise - terrific oyster wine. And, the 2012 is a “keeper” - great chance to get some great Oregon pinot with some cellar age on it.

Wish I would have gotten to try the Viognier…I like Viognier when it’s more minerally and taut.

Thank you for the fantastic notes on the wines. We heartedly agree that the Viognier pairs well with Seafood!

The Legacy pack is a heavy hitter. Nice to see an opportunity to get prime drinking window Oregon Pinot. Great choices.

Say hello to an iron fist in a velvet glove people. The late Howard was a fellow Chilango and he had a great way about him. Jessica is a first class winemaker and I have always been impressed with her craft. You can easily buy with confidence.

Hi - can you ship via FedEx? Did not see any shipping info on the web site. Thanks!

Love the vertical! Glad someone put that together, as it’s such a wonderful way to experience a winemaker’s style, particularly in Pinot Noir, and particularly from Oregon.

Hi - can you ship via FedEx? Did not see any shipping info on the web site. Thanks!

I can ship FedEx. We ship to most states.

I saw a 3 pack with some age and wisdom, had to tack that on today.

So glad we had some older wines to put on offer. We know it’s rare to see and we really wanted to represent the Willamette Valley with some older bottles.

If I follow you around this forum it may well become another BD haul.