Eating and Drinking in Los Angeles

Any recent thoughts on Augustine wine bar in Sherman Oaks? I’ve heard some very mixed reviews, but their daily by the glass pours always look interesting.

I love it there. Lots of interesting wine selections and food is surprisingly very good, judging by the little I’ve had. If you go on their anniversary they pour really crazy bottles btg.

Dinner at Majordomo last night was sensational. We have had every dish we ordered multiple times before and yet it was still a thrilling meal. Service was back on point and extremely welcoming. The wine list is not what it once was so we brought two bottles and ordered two. Can’t wait to go back!

Hit up Yangbang last night. Huge place. It was mobbed, over 100 people. They said they have been swamped since David Chang posted on IG that it was his favorite restaurant of 2022. The service was super nice and friendly. Wine list is not good, corkage is $50. We ordered a bottle of non vintage Krug off the list and they brought it with small old fashion champagne, chilled, yes chilled glasses. The could only muster up 4 wine glasses for our table of 6, luckily my wife and I travel with Josephine Hutte glasses. I say this not to complain only to inform anyone who goes to be prepared for this. The service was overall very good its just not a place where people are ordering wine. The food was very good, inventive and fun. I loved the high energy of the place. It is important that they emphasize its Korean American, not authentic Korean. I would love to see a Jonathan Gold review, I am sure it would have read like his Majordomo review. And back to Chang it did remind me a little of the early days of Momofuku Noodle and Ssam Bar (I was a regular at both). And since I went to Majordomo the night before I will just say it is much more refined and polished but that is not the point of Yangbang…I will go back…but only after returning to Majordomo several times and exploring any number of authentic Korean restaurants around LA.

So excited to try Collette. Thanks Charlie.

Glad to hear the restaurant is on the up. Friends went early on and weren’t bowled over.

When they were up at Meadowood, I said it was some of the best Chinese food I’d ever had

Looks good!
I might be in for Scallop Dry Braised Crispy noodles
$15 corkage sound right?

Think it’s $25 or something. They charged us $50 for 5 btls tho. Pretty flexible. Guessing the bigger the bill the less the corkage

Did takeout from Colette. Really nice change of pace.

Everything reheated well except for the honey-glazed shrimp. Would probably opt for dine-in on that – or even better, go for the salted egg version

. I thought it would have been too much with the fried pumpkin, but nope, I think it might not be.

All very distinctive versions from anywhere else I’ve tried.

Next time, will try dim sum and seafood (waiter said to call 24hr in advance for that).

Took a friend new to LA to Musso & Franks Grill last night. Hadn’t been in quite awhile or since the update. It’s always a nice treat for Europeans to see the American steakhouse in its purest, oldest and most traditional form. They always enjoy it. And if that doesn’t impress, the Martini with the sidecar at the bar, for sure will. Stiff pours.

We had Ribeyes, and they were cooked to perfection. And to be honest, compared to many other steakhouses, M&F really isn’t that expensive. But the biggest improvement since the do-over, is the wine list. It used to be horribly out of touch, but now it’s really excellent. On the CA side they had Bedrock, Desire Lines, Precedent etc and many more interesting producers. We chose a Tyler PN from Santa Barbara. Excellent (like I’d expect from that producer).

Anyway, M&F has kind of a slight reputation of being a bit of a tourist trap, but the service and the steaks are really very good, so I think it’s time to revise and revisit if you haven’t been in awhile. I love the place, but I’m a sucker for tradition and nostalgia. 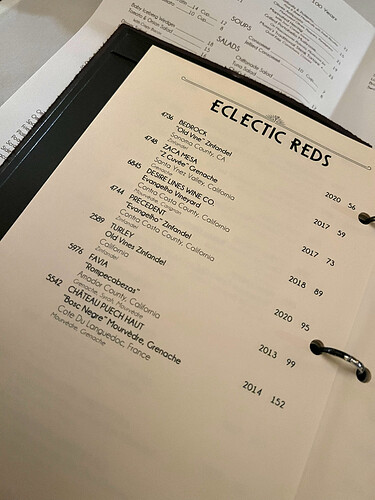 Great to hear. Musso & Frank’s is a treasure.

Luv2Eat- as said before -good quick option, but not quite fuss worthy. The curry and soup great, papaya salad not so much. Happy to go again if in the area.

AOC West Hollywood - a favorite of ours, we enjoyed it a lot. A very balanced menu from a vegetable lovers perspective. Fried chicken and the clams were standouts along with the veg.

Hatchett Hall- my first time, we loved it. A very large menu, plenty in every category. Scallops and yellowtail collar were fabulous. It’s a huge place and was packed early on a Tuesday night.

Does anyone know if Anajak’s takeout is anywhere near as limited/hard to get as a reservation/table there? My wife wants fried chicken and Ultramarine at home for her birthday, and I’m thinking Anajak would really do the trick if I’m able to get some.

Went to Camphor again for the first time since they got their star. Ate there a few times in '22 and it was never busy, but since the award, was told they’ve been booked solid every single night. Definitely think it is 1 star worthy.

It’s creative but not overdone and well executed. You can sense the french fine dining inspiration - not necessarily in flavor but in style. Wine and spirits lists are also quite solid. It’s priced fair relative to everything else in LA and I would happily spend the money there than at most other spots that charge the same. 5 out of 8 entrees are $32. Don’t skip desserts.

Thanks for the post, I need to try Camphor.

Does anyone know if Anajak’s takeout is anywhere near as limited/hard to get as a reservation/table there? My wife wants fried chicken and Ultramarine at home for her birthday, and I’m thinking Anajak would really do the trick if I’m able to get some.