Closing the year by making a few rare wines even rarer

After a year of drinking well my friend Guyon suggested we close out the year with an o’shea wine. Despite living in the hunter valley and drinking the odd bottle with the valley’s finest, my palate and cellar is all French. Guyon, who introduced me to the Loire (for which I am eternally grateful), however has adopted the hunter valley after moving here and immersed himself in our local wines. When he announced he wanted to drink some old rare local wines we rounded up a little posse and settled on a long lunch yesterday at Guyon’s.

We started with a couple of old champagne, not as necrotic as Guyon’s normal British palate would like, but both lovely with some fresh sevruga. The 99 billecart blanc de blanc was a little imprecise and lacking acidity, the 96 roederer was in a lovely spot, particularly with the residual taste of the caviar.

The first flight of old semillon was served with a salad of walnut pear and blue cheese. The 86 tyrells vat 1 was singing. Young and vibrant with with plenty of fruit displaying secondary characteristics. When these baby’s hit 50 in stelvins we are going to be in for a treat. This bottle was cork and direct from tyrells. The 84 McWilliams lovedale was paler and muted, with a little funk on the nose. Perfectly nice, but overshadowed by the vat 1.

The next two were a step down. A 1970 lindemans white burgundy bin 3870 was doa, all burnt with no redeeming features. The 73 rothbury estate semillon was barely alive, offering a gloss of what might have been a nice wine once apon a time.

The next two were a big step up. I have no old rare wines wine from the hunter valley, so my contribution to the day were burgs. They were served with wild boar in pepper sauce. (As an aside, wild boar needs to be deep frozen for a week to kill cryptosporidium. In addition to being a Loire and hunter valley tragic, Guyon is a nose to tail foodie. He has cultivated contacts who hunt a wild sow with which Guyon makes his own prosciutto. Seriously, he has too much time on his hands. His garden is 100% edible, and everything we ate was local produce from him. For those of us worried about wild boar parasites eating our brain, some reassurance came from the fact that in addition to being a Loire/hunter tragic with a penchant for wild local produce he is also an ICU specialist, so he has motivation to keep us and the cryptosporidium well apart. Anyway…)

The 76 drc Montrachet was sound. A tertiary nose was not as sweet or concentrated as I’d liked to have seen. The palate started stronger than the nose and kept developing complexity and depth and to me was what Montrachet is about. It lasted in the glass for well over three hours, and as is always the way was just hitting its peak at the last sip. The 1970 lindemans hunter river Chablis bin 3875 was also sound and paler in colour. The hunter valley boys were in raptures that this wine, which they declared was the best white australia has ever produced, was in tip top condition. To mine, the first whiff was sulphur (? Explaining its longevity) then it turned to pickle juice, markedly on the nose and minorly on the palate. It did have some complexity, but really? The best white australia has ever produced?? I understand this wine gets shown at the Len Evans tutorial, and it is remarkably alive for a 45 year old hunter white, but really? As an aside, sorry to Michael, when I mentioned the pickles it ruined the wine for him.

Moving on to reds, the next two were served with a venison carpaccio, you guessed it, wild and hunted to order then prepared by Guyon. The 68 McWilliams Pinot hermitage was nice, but simple and a little dull. Especially next to its younger brother, the 52 McWilliams Pinot hermitage. This was the o’shea wine. From a bottle with mid shoulder fill, and the wettest cork I’ve ever seen, it shows just how good the secondary seal between wine and capsule can be, fortunately. This wine for me is an out of context event. How a 62 yo hunter Pinot/Shiraz can be alive and so much more I find hard to explain. It had a lovely nose half way between the Clare valley and vosne, with an ethereal palate which is hard to find even at gc burg level. It stayed alive for hours and didn’t budge. I understand there has been little written about how Maurice o’shea made these wines, which is a shame. Should you ever have the chance to try one don’t hesitate to sell your first born’s left kidney to fund it. They probably have another.

The next two were served with wild hare ragout. You guessed it, Guyon knows someone who has a gun. The wild hare ragout was with linguini and chèvre. Smashingly good. They were a couple of old tyrells pinots. The 73 was drinking two decades younger, the 84 two decades older.

The hare wasn’t finished, Maurice o’shea did not publish recipes for wine but did for food. The next wines were with his roasted rack of hare. The 68 Tulloch was corked. The 65 lindemans hunter river Burgundy bin 3110 was, after the 52 o’shea, like being smashed in the face by a new world fruit bomb. Big, linear but simple and lacking any complexity, it was none the less amazing for a 50 yo. Apparently this wine is the one with a little Pinot and both rare and expensive (thanks JL for bringing). An accident being made, I think it’s fame reflects the fact the collective australian palate is one of massive fruit with the subtlety of a sledgehammer.

The last red I can remember was one of mine. Gerhard P posted a few years back his comprehensive musigny tasting (thanks!). I remember him being surprised by a 91 musigny being very good. I also understand Rousseau made very good 91s so when a bunch of 91 faiveley musigny came up at an obscure auction house I jumped in. Sadly I was a little late to the party and only got a couple of bottles, but they were at a price that would make Boldizar

. Bottle 100 (of 150) is no more. I wish I could tell you it was over rated. I wish I weren’t a hopeless don Quixote type burgundy obsessed loser. But I am. And wines like this are why. It was smashingly good. Slow oxed over four hours it was perfumed and concentrated and complex and impossible to describe.

By this stage it was 9pm, and we hadn’t not got to mains ( a big rack of beef was looking good) but my wife was out front and that was it for me.

Was a nice way to close the year. Thanks Guyon. 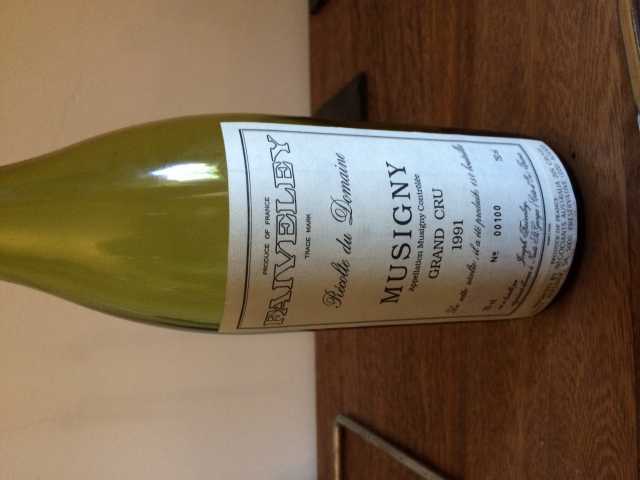 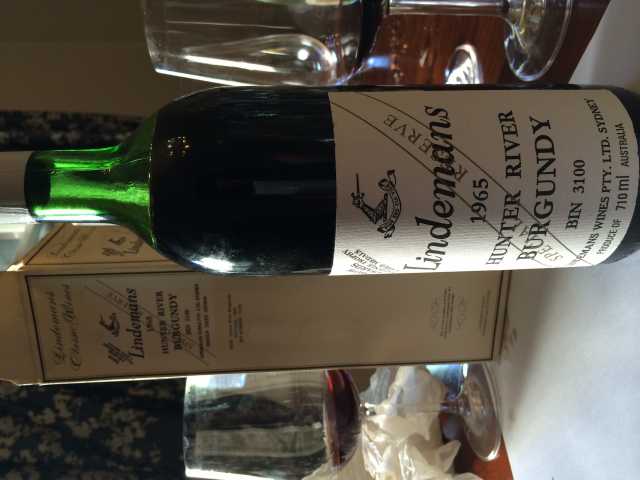 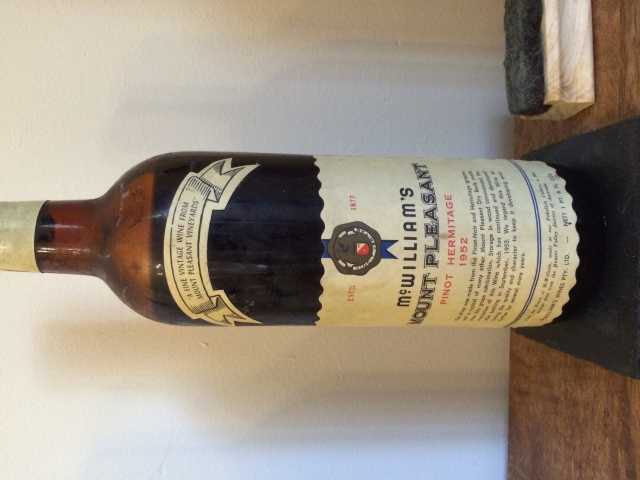 an early start to closing the year, but quite enjoyable! I so rarely see Faiveley Moose–I thought Jeremy drank it all.

That was a fun read, Don. Thanks!

Thanks Don. Have you read the book by Campbell Mattinson on O’Shea ?http://www.mountpleasantwines.com.au/our-story/maurice-oshea/wine-hunter-book/ . If not you will enjoy it. Looks like your 3110 was in great condition from the level in the photo. One day our tasting group hopes to have another faiveley musigny dinner and if we do and you still have a bottle I will be in touch.

So my theory is Faiveley Moose isn’t really rare it just all goes to Australia…and Missouri.

Alan, December is horrible for me, this was the last chance we had to get together this year.

Anthony, bottle 101 is chilling in my cellar and has your name on it.

Nick, negotiants Australia got at least 10 of the 150 bottles. That was then. I bet they get a whole lot less now.

So my theory is Faiveley Moose isn’t really rare it just all goes to Australia…and Missouri.

lol. They just split the barrel between St Louis Domaine and Australia.

Great post. But more evidence that I will never, ever, ever be able to have a feel for aging Australian wines. Every 1990 and 1994 Shiraz I have had has been shot, and every 1991 I have had has been too young and magnificent, and I don’t think it’s just because of the vintages. Maybe by the time they get to the States provenance is a huge variable.

Wow. Some great wines there. Still yet to have an O’Shea red, have had a white.

As suggested it is a wonderful book on O’Shea, if you want to borrow mine to read you are quite welcome to.