My mother is turning 80 years young later this year and I had the wild idea of sharing a birth year wine (1943) with her during the small celebration. I imagine this could be a mighty challenge. Anyone have any recommendations as to where I might begin this journey? Also, any recommendations as to what style/type/region may have held up relatively well after 8 decades? Any leads would certainly be helpful.

First, congratulations on your thought. We drank a 1922 Madeira in 2007 for my mother’s 85th and another on in 2012 for her 90th. She did not want a party for her 95th so we did not get one and she did not make it to 100, but everyone who was at her 90th Birthday party remembers the celebration.

I have had one bottle of 1943 in my lifetime and I am disappointed to admit that it was a German Auslese, since we used the 1922 Madeira at my mother’s 90th Birthday as the Havdalah wine, if you get my drift. It’s all about provenance. Make sure that you get it from someone who is reliable and does not BS you about how many hands it has passed through since it was bottled. I have some 1951 Rivesaltas (my birth year) - recommended by someone else for you - and that has held up very will.

I did this exactly for my mom’s 80th a few years ago, and got it from the same place! Wonderful stuff

Happy upcoming birthday for your Mom.
Rivesaltes is not a bad idea, and it won’t break the bank. Despite being a war vintage, '43 was good in Bordeaux, so you can probably find some.
There’s no vintage port from '43, and I’ve never seen sherry.
In August of 2021, we celebrated my Mom’s 90th with a bottle of 1931 Sherry. I think my brothers and I were more excited about it than Mom, but it was fun. We took the 1/2 finished bottle home to her, and she shared it with friends over the coming week. You could do that with a rivesaltes. 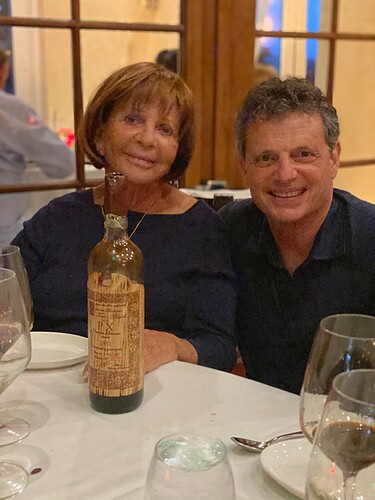 Thienpont in Belgium had some 1943 VCC , but I am generally wary of war time wines from France. The workers knew much of the production would go to Germany, so there was no incentive to make good wines, there were acute labor shortages, many winemakers were on the front, and finally a few workers put some interesting additives into the barrel.

Thanks for linking to Woodland Hills. Hadn’t been through their site before and I have the feeling I’ll be ordering from them in the near future.

How about putting a twist on the birth year theme, and look for a current wine that proudly points out that it is made from 80 year old or older vines.
e.g. Here’s what Hartford says about their Old Vine Zinfandel on their website

There are probably many more examples.

I share your challenge as I reach 80 years of age this year too. I see a few 1943 wines offered on wine-searcher including a Cazes Rivesaltes. My favorite from the region are Grand Cru Banyuls but none are available. Good luck. No matter what you get, I know your mother will appreciate it and especially the effort you put into making her day special. We old folks are sentimental that way.

They are highly flexible on buy and holds (buy over the course of time until you have a case together) and consistently have the best pricing on pre-arrival products. Also sell spirits.

This is a cool approach as well! “The vine that produced these grapes was just taking root in this world when you were”

There you go, Brady, and maybe add something like ‘Ma, you are still going strong just like these vines!

Yquem is for sure the best choice out there.

Ma, you are still going strong just like these vines

“Cheer up, Ma, you’re not nearly as withered and shriveled as these old wine vines are. Happy Birthday”

A few years ago, a friend was turning 100. Of course, I wanted to give her a wine from her birth year. But, not surprisingly, I didn’t have anything in my cellar that old. I finessed it with a wine from the year she turned 21. The first year she was legal to drink.

It wasn’t that drinkable, but it was more the idea. She turns 103 next month.

Warning: A friend ITB who used to host regular tastings had the ‘rule’ that you couldn’t drink anything older than yourself. Something about disrupting the space-time continuum…

Wouldn’t the drinking age have been 18 back then? haha

And I did the same with a 1932 Cazes Rivesaltes for my father’s 90th birthday last year. It was really nice and - more importantly - he loved it.