I’m trying to get some clarity about the Bordeaux wine “Benjamin de Pontet” and thought someone here might know for sure. I believe but cannot so far confirm that it is the name Pontet Canet uses for its second wine for European distribution, whereas their second wine is sold in US (and maybe other markets) as “Les Hauts de Pontet Canet”. Jane Anson’s (excellent) book Inside Bordeaux only lists “Les Hauts” as a second wine, noting that it is small production and started in 1982.

Does anyone have a definitive answer on this? I humbly thought perhaps @William_Kelley may be in a position to weigh in if you’re around and have some light to shine on this. Thanks to any/all answers, sources, etc.

Google images I found of 1995 bottles for reference: 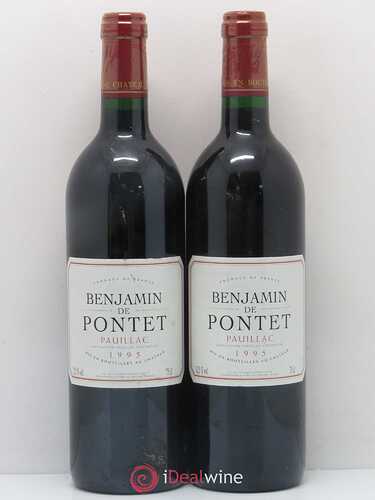 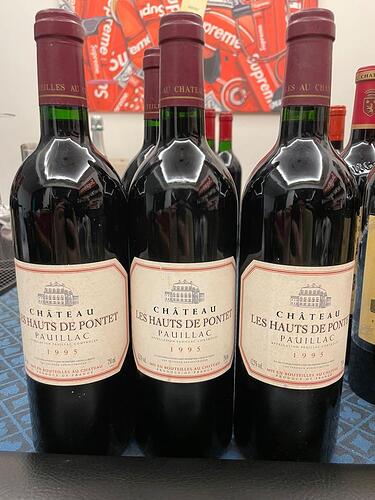 Nothing to do with Pontet Canet, which no longer produces a second wine. For more details …
Learn About Pontet Canet Pauillac, Complete Guide

Jeff, thanks for your reply. I’ve read the link you sent, but I must confess it seems to say that they do in fact make a second wine called “Les Hauts de Pontet”, reading in part:

Again I think it’s very clearly a small production as well as perhaps not even made in all vintages; that seems to be undoubtedly the case. But if you look at a few images online (see below for more examples) you can see quite clearly that bottles of “Benjamin de Pontet” state “mis en bouteilles au chateau” and “s.a. du chateau pontet canet”. One even has the Tesseron name on it along with Lafon-Rochet. A (French born) sommelier told a family member that Benjamin can’t be found in the US but no more detail than that, and I’ve even seen some mentions online that Benjamin is the US labelled second wine, e.g.:

Link 2: Wines.com board with similar commentary

Can I ask how it is that you know that Benjamin de Pontet has no connection to Pontet Canet?
Or that Les Hauts de Pontet is no longer being made? 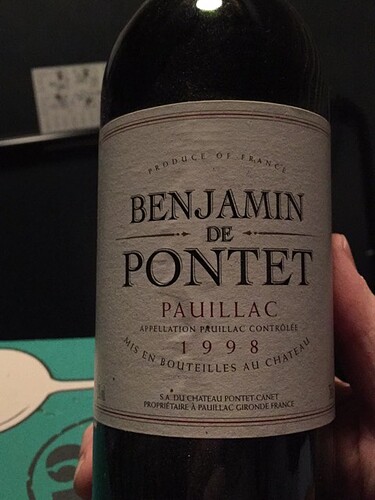 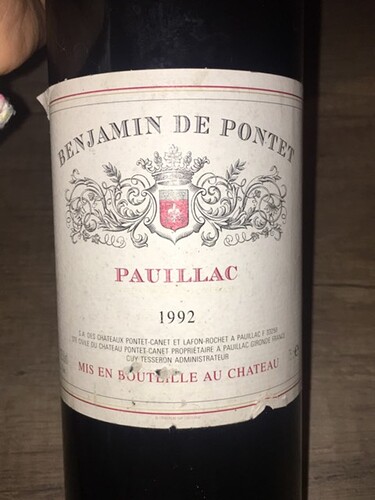 Jeff, thanks for your reply. I’ve read the link you sent, but I must confess it seems to say that they do in fact make a second wine called “Les Hauts de Pontet”, reading in part:

If you read the rest of my paragraph Les Hauts de Pontet it states that the goal of Pontet Canet today is to produce a wine that represents the entire vineyard and not just the best parcels. They feel the vineyard is healthy enough to warrant that approach. Tertre Roteboeuf takes the same approach.

As for Benjamin being part of Pontet, the Tesseron’s of Lafon Rochet are a different branch of the family.

Looks like you found the answer to your question!

I’m not sure it is correct to say it has nothing to do with Pontet Canet given that most vintages of Benjamin de Pontet clearly state on the label it is a product of Château Pontet Canet (while the 1992 states it originates from both Tesseron properties). Les Hauts is (or rather was) the name most commonly used for the second wine, but as the OP suggested many properties have alternative names for different markets, eg different countries, or on-trade vs off-trade, for example.

I don’t have a more definitive answer off the top of my head but will gladly enquire when I visit in a few weeks when retasting the 2020s. Although finding someone who remembers, given that all the vintages seem to be of the 1990s, might be a challenge!

Chris, thanks for the offer! It’s been really bugging me to not find any solid confirmation either way, so if you were to ask them directly, I would greatly appreciate it. Thank you again.

Sorry, honestly given that the discussion had turned into a classic WB back-and-forth and Jeff’s website is so thorough, I assumed the question had actually been answered, and I didn’t read the exchanges as thoroughly as I might have.

I checked with a friend in the UK who replied “this wine was the second wine of Pontet Canet and is identical with Les Hauts de Pontet”.

So there you go.

William, thanks for the response and confirmation. Tip of the cap to your friend as well. Thanks to Jeff and Chris as well for the discussion. And I agree about what a great resource Jeff’s website is. I reference it time and again, thanks Jeff!

Happy that you have the answer to this, and happy to help!

I am always happy to learn. The owner of Pontet Canet verified that Benjamin de Pontet was a second, second wine from Pontet Canet that was produced for a few vintages in the 1990’s. I have updated my site to reflect that.

Oh wow what a confirmation straight from the horse’s mouth. Thanks for sharing. And I really love your site, please keep up the great work!

The 2009 vintage of Les Hauts de Pontet Canet had a fascinating development. I think that vintage was a tremendous value and is still evolving. One of those second wines of Bordeaux made at a very high quality level. Interestingly, the people at PC rarely showcase it in private tastings. Discontinuing it might make sense to the chateaux owners, but the consumer looking for a lighter, earlier-maturing modern Pauillac at this price level will have to look elsewhere unfortunately.

the consumer looking for a lighter, earlier-maturing modern Pauillac at this price level will have to look elsewhere unfortunately

Buying Pontet Canet would cost quite a few more Benjamins.