The fine folks at VDLT (Thanks, Greg!) held a contest over the summer and I was one of the winners. The prize: Three bottles of 2016 Christophe Pichon Côte Rôtie “Promesse” at no charge - free wine, free shipping, the works. The catch - I had to promise to open one promptly and post a TN. I normally don’t open any Côte Rôtie anywhere close to this young, but OK, I can do that!

After putting off shipping during the warm months, these arrived 2-3 weeks ago. I gave them that time to rest after shipping, and then arranged a virtual tasting with a couple of other local Berserkers last night. I Fu’d* the wine, along with a 2006 St. Cosme Côte Rôtie for comparison, and the others contributed Fus** of four more great wines - 2004 Beaucastel, 2008 Trevallon, 2009 Mastroberardino Taurasi Riserva, and 2012 Beta Cabernet Montecillo Vineyard. 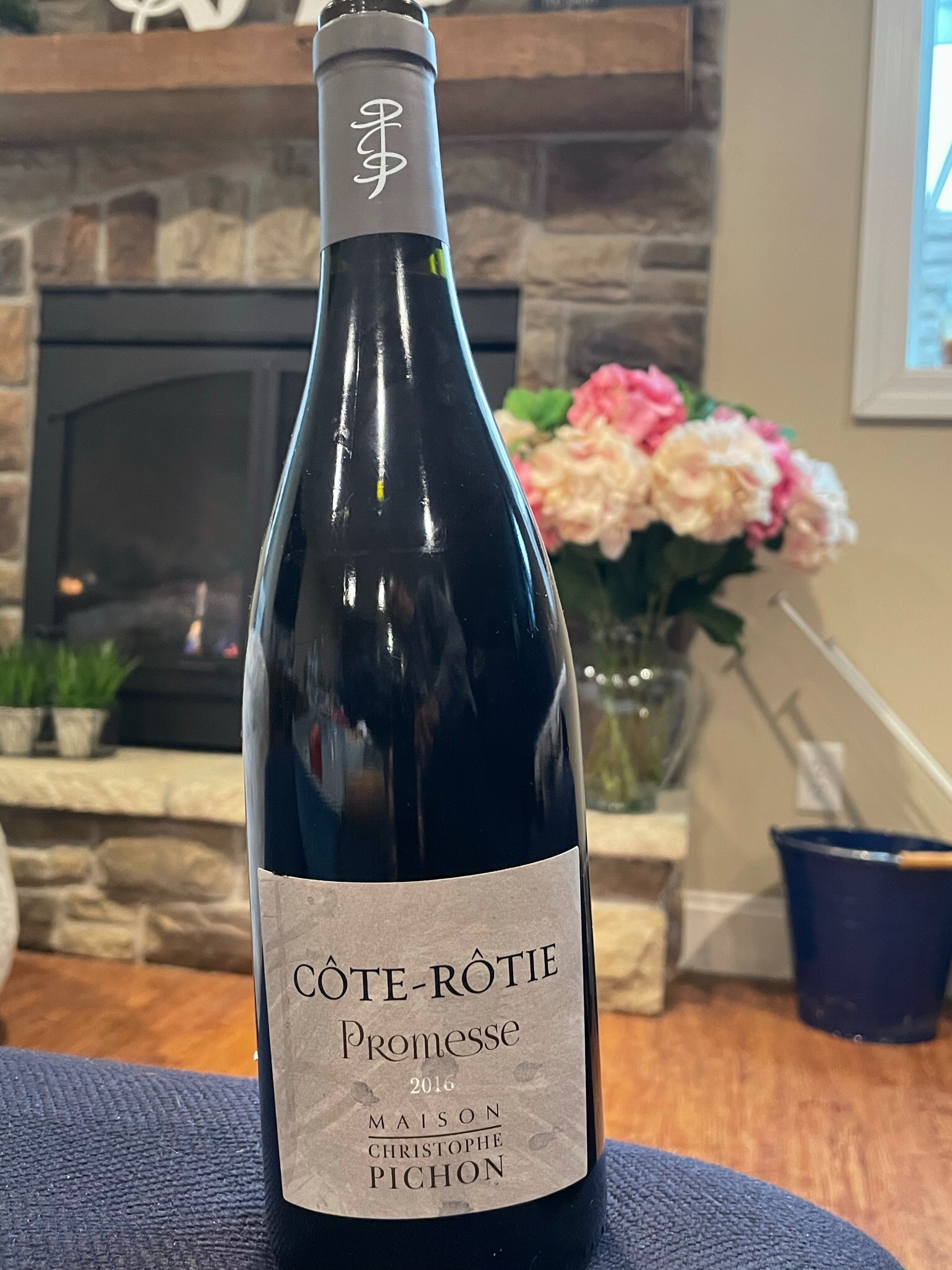 I opened the wine at 12:30 or so and tasted an ounce or two - Ripe and grapey on the nose with a bit of pepper. Similar on palate - very primary fruit, some pepper and smoke marking it to me as a true Northern Rhône. Its big primary fruit, and some new oak, were in the foreground, with its structure in the background. From all I’ve read about how 2016 compares to 2015 I was surprised at how big and ripe the fruit was here, at least on PnP.

Into the decanter it went until 5:00, when I Fu’d the two samples and poured the rest back into the bottle, leaving it standing without a stopper in the cellar until our tasting at 8:00.

8:00 pm - The structure is now coming forward, balanced with the fruit, and with the oak less noticeable. Very interesting to taste side-by-side with the 2006 St. Cosme, as they are clearly cousins. The smoked meat and pepper notes in both are clearly in the same key, even if they sing different melodies. Ain’t no syrah like Northern Rhône syrah, and this is no exception. The back label says there’s 10% viognier in the mix, but at this stage of the game, the increased extraction that can come with co-fermentation is showing, but the floral aromatics of the viognier aren’t. I expect they will emerge in due time.

About a quarter of the bottle went back into the cellar overnight with a stopper. Tonight, the structure and oak stood out less, and the fruit, while dominant, was less grapey and primary.

All in all, this is clearly a well-made wine in a relatively modern style. The new oak gives it some polished notes that may erase some of the more feral notes that some wines from the slope may display, but at the same time the touch is light enough that the meat and pepper that clearly mark it as Northern Rhône still shine through. it will be very interesting to see how this ages, and I have high hopes for it. Recommended for those whose preferences run to that middle ground between New World syrah on the one hand and the most sauvage and rustic of the Northern Rhône on the other.

*If we can make “Audouze” a verb, we can do the same for “Fu” - to pour off tastes into 4 oz glass bottles and then exchange before retreating to the socially distant safety of home for a Zoom tasting.
** Why not a noun, too?

Thanks for setting this up Dave!

My note for the 2016 Pichon Cote Rotie Promesse: Showing very youthfully right now, the first impression is smoky new oak, but it was not overwhelming. There’s still a touch of primary grape fruit as you mention. Both the oak and that grapey quality subside as it gets some air and everything comes together more nicely. Some bacon and, as Dave mentions, a dash of pepper. Lots of structure at this stage, and the tannin is very pronounced when tasted alongside the '06 St. Cosme. Agree that the style here is relatively modern for Northern Rhone.

My brief impressions of the other wines:
2006 St. Cosme showed much more resolved compared to the younger wine; drank very smoothly with pepper and meat notes to compliment redder fruit flavors.
2009 Mastroberardino Radici Riserva had a great nose of fruit, flowers, and spice, with dark fruit and firm, rasping tannins on the palate.
2012 Beta Monticello was a strong beam of cherry fruit after all of the old world wines.
2008 Trevallon had a ton of garrigue and I think is very good despite the relative weakness of the vintage in the Rhone.
2004 Beaucastel I initially thought was more advanced than it should be but with a bit of air seemed correct and very nice.

My note for the 2016 Pichon Cote Rotie Promesse: Definitely thought this one had a good amount of smoke, black olive, black pepper and minerality on the nose. Even a little floral character from the viognier. I thought the wine was pretty polished, with silky tannins and some elegance, whereas the 2016 had a more rustic character to it.

You’re welcome and thanks for the extra effort in organizing this tasting. I am pleased you all seemed to enjoy and appreciate the wine. Your tasting notes are reasonably consistent with mine.

To add some perspective on this producer, who is not well known in the US, the Pichon “style” is terroir-driven but they strive for finessed wines. Promesse is their entry-level Côte Rôtie and intended for earlier drinking than the other 2 (a single vineyard Rozier and a Côte Blonde) and it’s priced accordingly. They use 75% new oak for Promesse, which does integrate in time, at which point, it seems less modern. I have been drinking the 2012.

Corentin Pichon, son of Christophe, took over the winemaking a few years ago. He is a 20-something. I am seeing improvement in all his wines from year-to-year (and even his first vintage was arguably better than what his father was producing (which I liked as well). I am about to taste his 2018’s, of which he is extremely proud. This is the first in many years I have been unable to visit them.

They produce about 100,000 bottles per year and sell mostly to European importers and private customers. The whites (Condrieu, St Joseph, etc.) are what originally attracted us to this Domaine. Good people to boot!

I’m a big fan of VDLT’s wines and it sounds like I need to include this in my next order. Thanks guys

I’m a big fan of VDLT’s wines and it sounds like I need to include this in my next order. Thanks guys

Glad to hear that. I just received a bunch today that I ordered from their Loire special from last week, and need to pop one of the 2000 Jasnieres bottles as soon as it’s had some rest.