My wife and some other family members hung out in Bordeaux a few weeks ago and had a lovely experience...

The adventure started at home and we killed a 1959 Pichon Baron and a magnum of 1970 Château Carbonnieux.

Both were fresh, to my relief. They are both old style Bordeaux with what I like to call 'austere' fruit...simply meaning that the wine has well balanced fruit/other notes with fruit being part of the mix and not predominating. The 1970 was from magnum, which I suspect is a good thing...it seemed to imply some fading. The 1959 was surprisingly vibrant, but all tertiary and savory. Paired with Flannery 56-day steaks.

So, off they went, not knowing where they'd find tasting opportunities...

No first growths, but they found ways to visit Château Cos d'Estournel, who served them what would be Nanny's favorite wine of the trip...their vintage 1995. She also greatly enjoyed the 2016. So, here's Nanny, coming up on 90 and keeping her palate fresh!

I don't know if it's hard to accomplish, or not, but they got to visit D'Yquem and they spent about 300 Euros each, but got to taste 6 or 7 vintages. They said it was well worth the price! 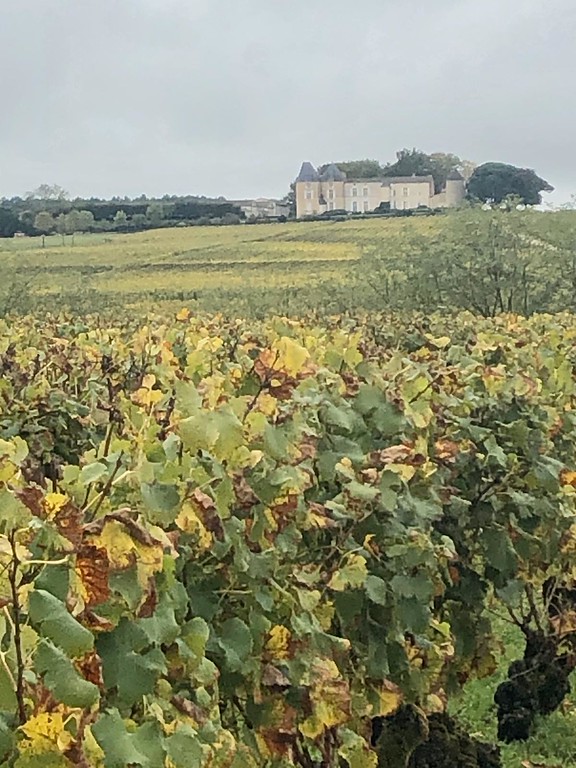 My wife's favorite visit was a stop at Château Pichon Baron, where they tasted 3 vintages of what is typically her favorite Bordeaux...as a Tom Waits super-fan, she pointed out that the camera had been drinking...

The reason for this whole post, and something greatly enjoyed was the Bordeaux Wine Museum...with tastes!

My wife (Katy) doesn't post, but she tells me what she thinks and reads along with me sometimes when I am here. She is an enthusiastic Berserker and we are both proud to be part of this great place. So, with no further ado...a Berserker Abroad in Bordeaux...in 'uniform!'

Get your Berserker shirts and pins!

1) My wife has a great passport cover that says "Republic of California." It opened some doors and she got to chat about California with nice French people. (For fun, if someone asked if she was American, my wife would flash her passport and reply, "Californian." She said that was fun.

2) She went to a shop called Vignobles & Chateaux. She and Nanny and a few other family members looked in inside the shop, and were greeted with some slight trepidation. The proprietor explained that this was a wine shop and not the typical tourist drinking station that some seem to expect. They looked around the shop and started chatting with each other about the wines and, suddenly, the store person erupted with the French equivalent of "Well, why didn't you say so!" His name was Benjamin and he treated them like gold, and they tasted and purchased wines and had a grand time. I am not allowed to know what they bought because we are going to do a group blind tasting with their spoils in the future.

After regaling me with the greatness of Benjamin...dude, if you are out there, you are an honorary Berserker...my wife told me the coups de graces: Benjamin said his favorite red wine in the entire worlds is...take a guess!!!!

Click to see spoiler:
Dunn Howell Mountain Cabernet!!! No kidding. He asked my wife if she had ever tasted this elixir of the Gods and she told him we were Dunn hoarders and 'if he's ever in the area...' Amazing how wine brings people together in this big old world!

Amazing, in all the wine universe, that's what he most prizes/savors.

Anyway, my wife says big time fun (I stayed home and worked and managed the alpacas and other sundry animals, poor me.)

3) Big time hint: let your freak wine appreciation flag fly. Once people noticed they were actual wine lovers, cellar door after cellar door opened and they had a great experience. Tasting there, she said, was a bit like in California...as you taste the counter top wines and chat about the hobby, other bottles can magically appear as the proprietors realize that they are in the company of kindred spirits.

4) Ending shot: Any time my wife or one of her group tried to engage in French, the people were lovely and switched on their English for the rest of the conversation. They really seemed to enjoy the fact that people weren't just talking really loudly in English and expecting the listener to understand.
Last edited by Anton D on November 8th, 2019, 3:56 pm, edited 1 time in total.
Anton Dotson

A drunkard's dream if I ever did see one
Top

How did you get the Flannery steaks to Bordeaux? You just put them in your carry on luggage?
Paul
Top

P Intag wrote: ↑
November 8th, 2019, 2:54 pm
How did you get the Flannery steaks to Bordeaux? You just put them in your carry on luggage?

They ate them at home. “The adventure started at home”.
J@son Tr@ughber
Top

Looks like an awesome time. And I love Pichon Baron, I wish I could experience more of it.
Top

Awesome post, Anton! Thank you for sharing the experience and the pictures.

P Intag wrote: ↑
November 8th, 2019, 2:54 pm
How did you get the Flannery steaks to Bordeaux? You just put them in your carry on luggage?

They ate them at home. “The adventure started at home”.

Would probably help to pay attention when reading posts. Incredible trip though, even without Flannery steaks!
Paul
Top

Great read Anton, makes me want to get on a plane!

Wow. Great stuff Anton. Really makes me realize how much of the wine world we've actually missed while being in the middle of it.
IN THE BUSINESS SHILL: An associate of a person selling goods, who pretends no association to the seller and assumes the air of an enthusiastic customer.
Top

I do not show up in reflections or photos.
Anton Dotson

Does Ben know the guy named Ben who does the Dunn tastings now or is it just all Ben?
Top

Excellent report, Anton, sounds like you had a wonderful time!
Top

What a nice story!!!!!!
The forest was shrinking but the trees kept voting for the axe as its handle was made of wood and they thought it was one of them.
Top

That was a most excellent adventure! Wish you had gotten to go too. Thanks for sharing!
Bob Wood - 1949-2013 Berserker for eternity! RIP

"On self-reflection, I think a big part of it was me just being a PITA customer..." ~ Anonymous Berserker

"Something so subtle only I can detect it." ~ Randy Bowman